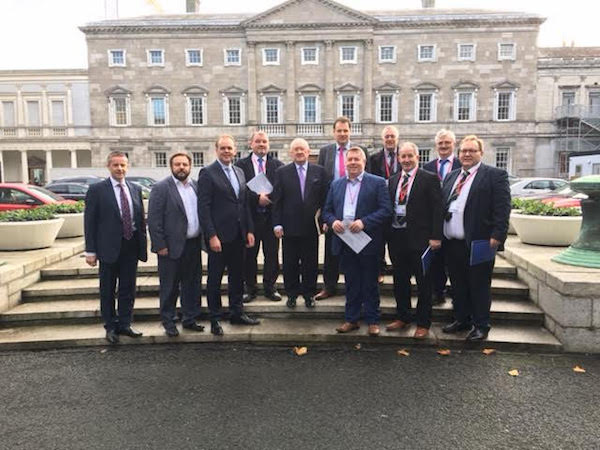 Mayor Kavanagh was speaking after a cross-party delegation of TDs, Senators and Councillors met with Minister Ross at Government Buildings in Dublin this morning.

Minister McHugh told his Cabinet colleague that Letterkenny is the economic driver for the whole county of Donegal and that investment in roads infrastructure around the town is vital for future growth.

Mayor Kavanagh said: “We are very grateful to Minister Ross for meeting us today with council officials to go through the very real problems Letterkenny faces on a daily basis due to ongoing traffic issues.

“Everyone at that meeting, from every political party, agreed that funding is needed to strengthen and build on our economic growth.

“I also told the Minister that the money required for the town including the Bonagee Link would be a loan to Donegal; that Donegal can be a net contributor to the State if we are given the infrastructure to do so and that the county will be in a position to pay back this money througheconomic growth in the years ahead.”

Minister McHugh added: “I want to thank Minister Ross who agreed today that he should visit Letterkenny to see the town and to familiarise himself with the issues facing our biggest town.

“It is also key to a series of measures aimed at Brexit-proofing Donegal and the entire North West in the years ahead.”

Meanwhile, county councillor Ciaran Brogan said he was very pleased that all parties had pulled togetehr to form a united front on the issue when meeting with Minister Ross.

However, he said he felt that the soundings coming form Mininster Ross is that the Bonagee Link will not be an isue which will be included in the National Development Plan and there it will not be addressed until at least 2021.

“In fairness to Minister Ross he listened to all our concerns and all Donegal representatives are singing from the same hymn sheet.

“However, I fear there needs to be more urgency here and that we have to conitnue to press ahead with letting Government know how urgent this issue is.

“If there is a way, and I feel there is, that the Bonagee Link can be inlcuded or put on the NAtional Development Plan, then I feel that is a priority issue. It just has to happen.

“The Government has to realise that Donegal is a special case when it comes to our infrastructure not just because we are so geographically isolated but because of the fact that we have no rail network and that our road network is in constant need of upgrading,” he said.