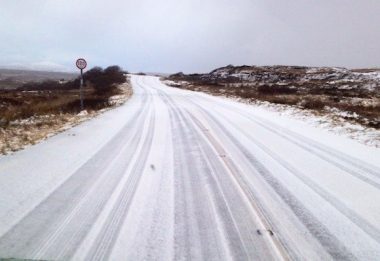 Those surveyed by Liberty Insurance say that they do not feel that Irish roads were equipped to deal with weather conditions such as ice, snow, strong winds and fog.

Overall only 15% of drivers feel adequately prepared to drive in inclement weather following the successful completion of their driving test.

Conducted by RED C Research among 724 drivers, the survey found that ice on the roads and snow have the strongest negative impact on confidence amongst drivers; less than half (43%) of all drivers are confident driving in snow, while just over a third (35%) feel confident operating their vehicle with ice on the roads.

The research found confidence levels when driving in such conditions to be lowest amongst young drivers, females and those living in Munster.

Young and recently qualified drivers are most nervous when driving in adverse weather conditions. 80% of drivers under the age of 30 are not confident driving in bad weather, and only 15% of newly qualified drivers feel very prepared to drive in inclement weather following the successful completion of their driving test.

More than three in five drivers (62%) have felt nervous as a result of driving in bad weather. Overall, drivers in Munster tend to be most nervous, with only 22% of drivers in the region feeling confident when driving in adverse weather.

The conditions most frequently cited by motorists in the region include heavy rain, snow and ice. Dublin motorists on the other hand were more concerned by driving in fog.

Commenting on the research, Deirdre Ashe, Director of Personal Lines at Liberty Insurance, said: “Our research reveals that as a country, we currently lack confidence in our driving abilities in adverse weather conditions.

“This nervousness in driving in poor weather becomes all the more concerning as we approach December and January, the two months of the year most typically associated with poor driving conditions. As we approach the festive season, we are calling on all drivers to be aware of their surroundings especially in adverse or wintry weather conditions and exercise their best judgement when travelling.”

“In terms of road safety education, the Road Safety Authority has made great strides since its foundation, and its achievements are there for all to see.”