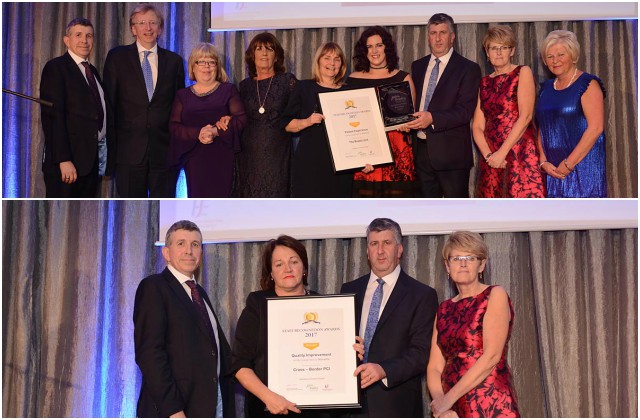 The hospital was presented with two awards at the event, the e-Rostering project at LUH won the Non-clinical Innovation award and the Breast Unit at LUH won the Patient Experience award.

Over 145 projects or initiatives from services and departments across all of the hospitals in the Saolta Group were nominated in seven different categories.

Winners were presented with their awards by Saolta Group CEO Maurice Power and Group Director of Nursing and Midwifery Jean Kelly.

Commenting Sean Murphy, General Manager Letterkenny University Hospital said, “These awards provide an opportunity to recognise and celebrate the contribution and achievements of staff delivering services in the hospital across areas of patient care and education and research.

“We are delighted that in total four projects were shortlisted for these Staff Recognition Awards.

145 entries were received and these were shortlisted to finalists in each category by an independent judging panel.

The winners were announced on the evening by event host Maura Derrane at an event attended by the finalists.

The Saolta Staff Recognition Awards is self-funding from sponsorship received.