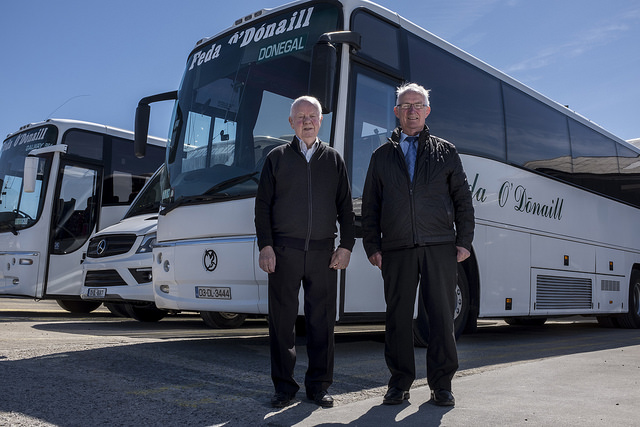 A new TV series following the fascinating history of the Donegal to Glasgow bus will begin this week.

Bus Ghlaschú, a four part documentary, will be trip down memory lane for many Donegal natives and the diaspora.

Cameras go on board the buses of three local company to interview passengers about their journeys across the water to Glasgow. Bus Feda, John McGinley’s Buses and Doherty Travel are all featured throughout the series.

The bus service has been running for 50 years, beginning in the early 1960’s via the old Derry Boat.

Over the years the drivers have seen changing times and memorable moments including IRA hijackings, emigration, deaths and, on a lighter note, people on holidays and visits to friends and families.

The series will hear from bus owners Feda Ó Donnell, John McGinley and Nan and Anthony Doherty and drivers Pádraig Ferry and Seamus Doherty as well as some of the famous and colourful characters who have used this bus over the years.

Ireland and Glasgow Celtic legendary goalkeeper Packie Bonner will talk about his trip to try out for Celtic. Lorraine McIntosh, singer with the Scottish band Deacon Blue will also reflect on her many journeys.

The series is created by HG Productions, based on Arranmore Island, and produced and directed by local woman Helena Ní Ghallachóir.

Watch the first episode on Thursday, 30th November at 8pm on TG4.

Buckle up for a brilliant new series about the Donegal-Glasgow Bus was last modified: November 29th, 2017 by Rachel McLaughlin