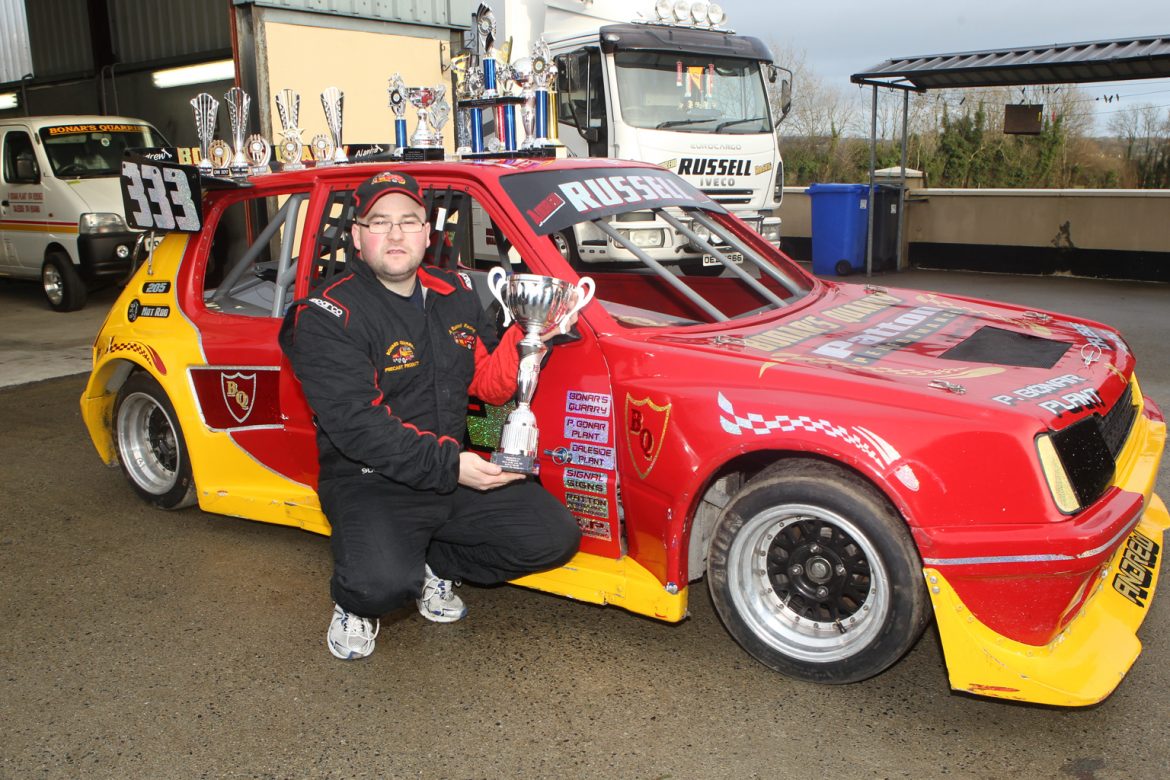 Drumkeen’s Drew Russell ended his most successful season to date both in Northern and Southern Ireland as the all round hot rod winner for 2017.

A display of some of his silverware nearly outweighs his lightweight open hotrod slick car which will undergo a major upgrade in power for the next season.

The car which is based on the looks of a 205 Peugeot is a full house two-litre redtop 250 BHP 680kg rear wheel drive flying machine breathing through a set of twin 45 Weber carbs. 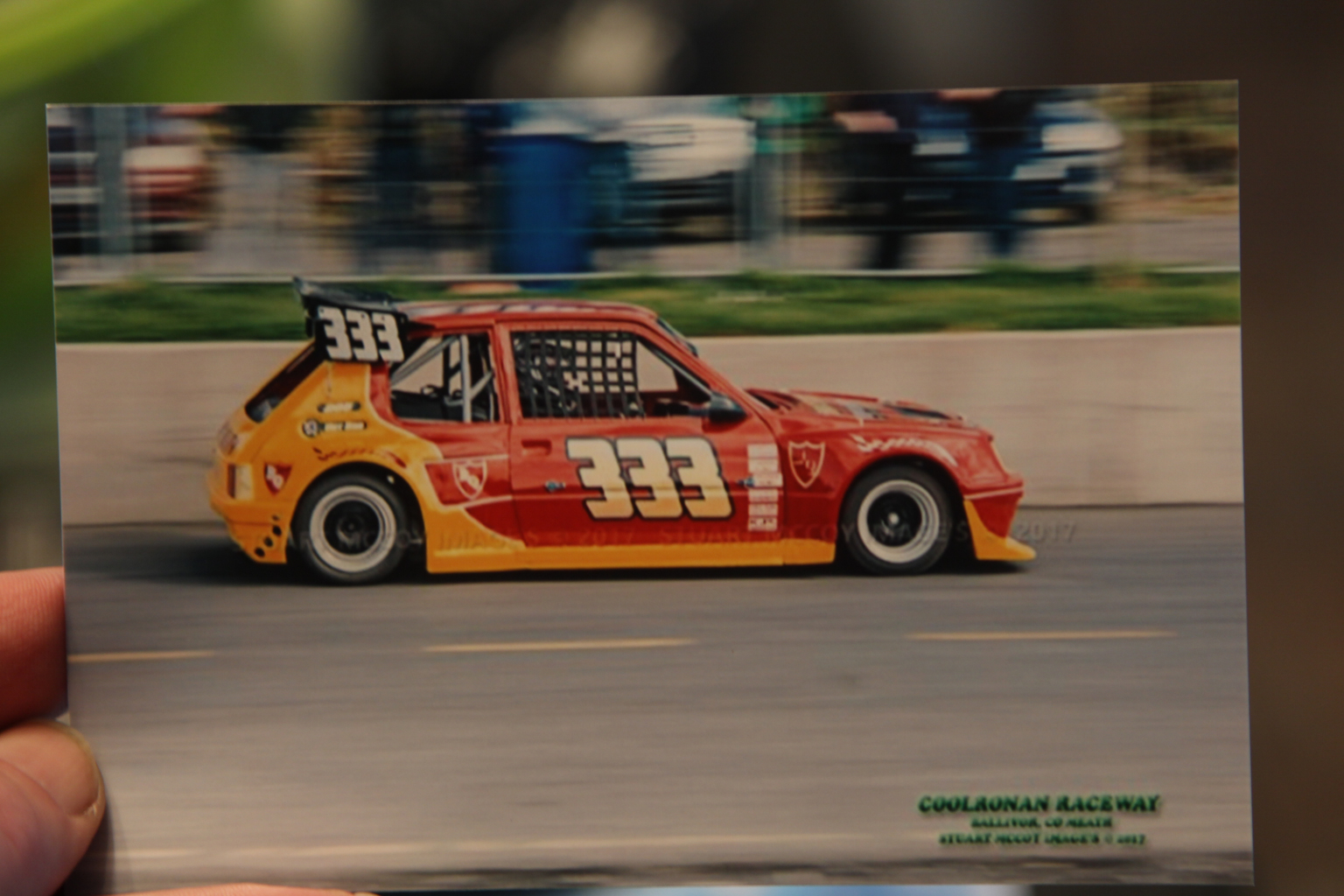 The Vauxhall power plant sits very low and is set well back into the centre of the car to give the car a great balance and a low centre of gravity. 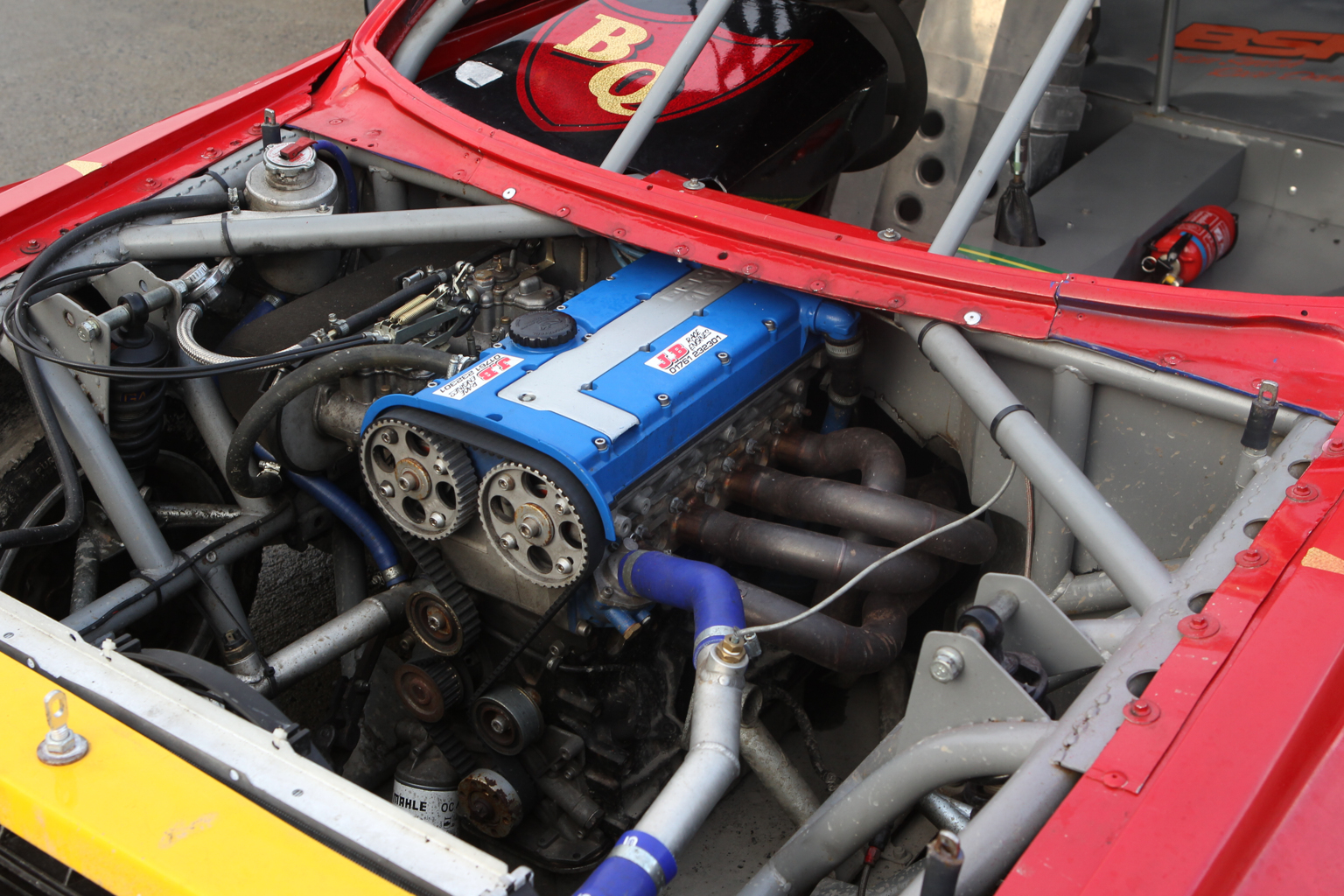 Andrew and Alanna his children are totally into their father’s success on the track and when they’re not talking hot rods they are talking Nascar racing in their home in Drumkeen. 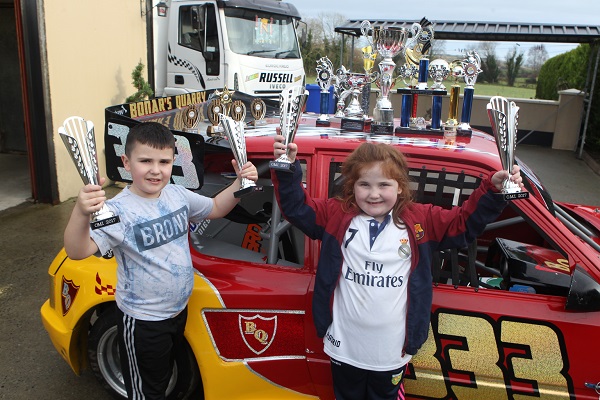 Andrew and Alanna Russell proudly share in their father success on the race track for 2017. Photo Brian McDaid

Drew Russell developed his love of hot rod racing from a grass root level here in Donegal attending stockcar race meetings at the old race track in Woodlands in Letterkenny, and recalls the heroes of those days like, the larger than life Kevin Lafferty, Ronnie Mc Connell in his highly tuned Mini, Billy Black in a very powerful Hilman Imp, Francis Wray in a six-cylinder Datsun, Micky Bonner in his Beetle, Daniel Rodgers in his powerful Mk2 Escort and not forgetting Ben Dunleavy in his VW Karmann Ghia.

Drew has progressed through his days in Kilmacrennan race trace and the Racetrack in Manor to the top racetracks in Northern and Southern Ireland. The Drumkeen man is his own sponsors through Bonner Quarries and is looking forward to the new season and further development of his award-winning car.

Santa steers with one hand, waves merrily with the other. Back in the real world we all try to do the same on the run into Christmas but our wave might be a little different when we are sitting stuck to the ground in our cars of a different era.

It’s not that many years ago there was a goodwill element to our daily commute on the run into Christmas. That is fast disappearing especially in a town like Letterkenny. 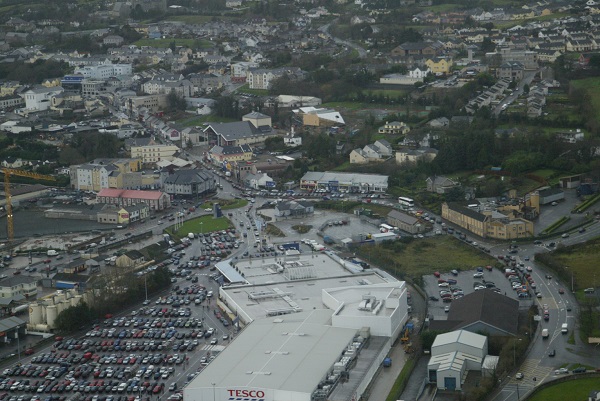 Santa View of the station roundabout in Letterkenny taken from the aiea coupe foyers ago. No need to worry about the congestion at the Station Roundabout. Photo Brian McDaid

Any bit of goodwill that motorist have in Letterkenny is drained out them every time they have to pass through the Station Roundabout in the middle of Letterkenny. I know us older folk will not consider the Station Roundabout as the middle of the town but now by default it’s the busiest part of town. I have seen motorist running out of fuel around town this week which is always a sign that their journey took far more time than they thought it would.

Lane hopping
The is one of the biggest contributions to anger among motorists in Letterkenny is drivers changing lanes when traffic backs up only to rejoin the lane to their direction nearer their turnoff. This is a common practice on the way into the station roundabout which brings traffic to a complete stop as temper reaches boiling point as motorist get caught in the jam.

Turkey trot
If it is the station roundabout in now where a traffic gets congested for all the wrong reasons it was the other end of the town that jammed in the run into Christmas back in the day for all the right reasons.

The lower Main Street area had no less than three bakeries at the foot of the town. There was O’Donnell’s, The Model Bakery and Larkin’s. Always a class smell of fresh bread cooking and cooling for years at the foot of the town. On Christmas Eve that smell changed from baking bread to an aroma of roasting turkeys, the bakeries opened their ovens to the public on Christmas Eve where it was possible to get your turkey cooked in their big industrial ovens.

My first experience of this was in the early seventies. We put in our order in Dillon’s Supermarket for a fresh turkey in the run-up to Christmas. Our turkey trot started the day before Christmas Eve where we got fresh turkey with our “big shopping” in Dillon’s which included the luxury of a taxi home courtesy of Jimmy Sweeney in his Austin Cambridge.

An overnight stay in Wolfe Tone Place in Glencar to get the bird ready, not that we had a clue what we were doing! No googling in them days. The next day the turkey was on the road again this time in the cab of a ESB lorry when my father would give me a lift down with it to join the rest of the town at Larkin’s bakery. Those that were organised had a name tag attached to the baking tray. The bakery was a hive of activity as the town’s turkeys all lined up for the big bake-off. We were all told to come back in the afternoon to give the bakers a chance to cook off all the turkeys.

It’s now getting late on Christmas Eve our turkey was ready for collection but my father wasn’t! The craic in Nellie McGovern’s on Christmas Eve was too good to be worrying about the Christmas dinner. When I got down to collect our turkey it was the very last one in the bakery and what was worse it wasn’t even ours! The tray was far to fancy compared to the one I left in that morning and the bird put on about 10lbs in weight in the bake off.

The baker was looking to close up, and he said look young fellow take that one with you!

We left in a bantamweight that morning now I was heading up the Main Street on Christmas Eve carrying the happy meal of a turkey to my father still in Nellie’s. That Christmas our Christmas dinner was a success, my father was praising my special stuffing and roast potatoes and me knowing well somewhere in Letterkenny a family was taking a sad look at our bantamweight stuffed with two big spuds and a couple of slices of streaky bacon on the top in our battered baking tray.

Maybe someone knows who ended up with our turkey all them years ago! If you do will you please let us have our baking tray back! 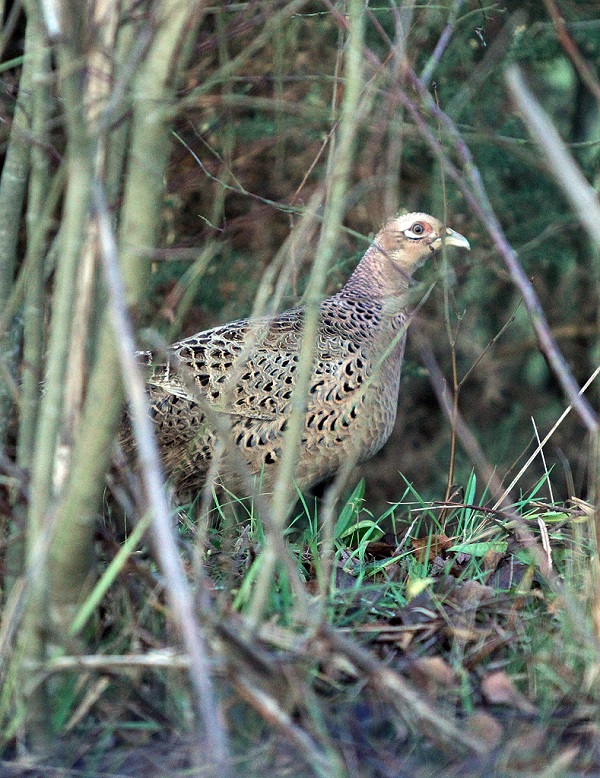 The one that got away. A picture of a lovely pheasant hiding in the hedge near the Oldtown in Letterkenny this week as it escapes the Christmas table. Photo Brian McDaid.