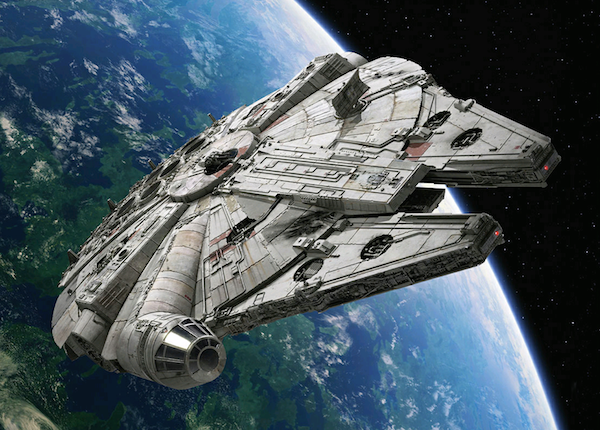 BREAKING NEWS: A strange spaceship resembling the Millenium Falcon has been spotted in skies above Inishowen this evening.

Reliable sources have said that the vessel is being driven by Santa after Rudolph and his fellow reindeer came down with a 24-hour bug.

It is understood Santa contacted a friend in Donegal Tourism and arranged to meet the Millenium Falcon in a field on the outskirts of Buncrana at 6.30pm.

Santa is now warning all boys and girls that they should be in bed as soon as their mum and dad tells them tonight.

So far there have been sightings of the Falcon in the skyline above Fanad (he wanted to see the lighthouse) as well as Sliabh Liag, Glenveagh and Malin Head after he heard his old pal Luke Skywalker told him about it.

Local Dunfanaghy tour guide Chris Massey has said there have been reports that Santa has visited the area in recent weeks disguised as an American tourist.

He also attended special screenings of the latest Star Wars movie, The Last Jedi in both Century Cinemas in Letterkenny and Eclipse Cinemas in Lifford.

“We heard he was in the area because he had heard Donegal is the coolest place to visit in 2017.

“Obviously he heard that a lot of the filming for Star Wars was shot in and around Malin Head.

“When Rudoplh and the rest of the guys took ill during the week, he pleaded with Luke to give him a loan of the Millenium Falcon.”