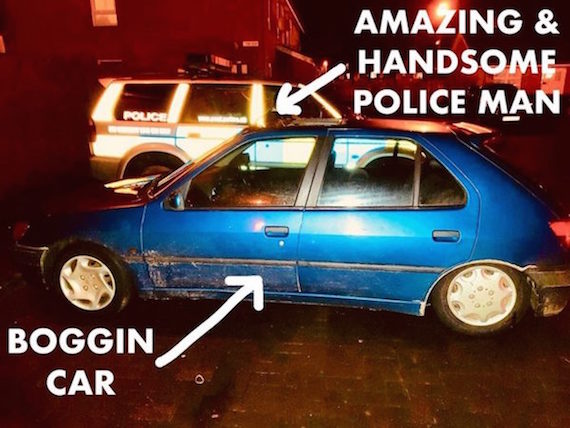 Gardai and PSNI combine to take ‘killer’ car off the road

Joint work between Donegal Gardai and the PSNI in Derry has helped to take another dangerous car off the roads.

The car had been spotted being driven erratically in Donegal.

Social media had reported the car was being driven by “maniacs” with some saying it could have caused a “serious accident” trying to evade Gardai.

After being given the slip by the car criminals, Gardai alerted the PSNI in Derry who eventually ran it to ground.

Unfortunately, two people on board had fled the vehicle on foot before they could be arrested.

This is how PSNI Foyle reported the seizure on its Facebook page:

Another One Bites The Dust music

“Ballyarnett Neighbourhood Team were alerted to this Killer Queen

by our Colleagues in #AGS

“That saved their skins but not their motor.

“I think I can still say We Are The Champions#TeamWork #Queen #GettinTrashOffTheRoad#KeepingPeopleSafe.

Anyone with information about those in the Peugeot car is asked to ring PSNI Foyle on the 101 number.

Alternatively, information can be passed anonymously to Crimestoppers on freephone 0800 555 111.