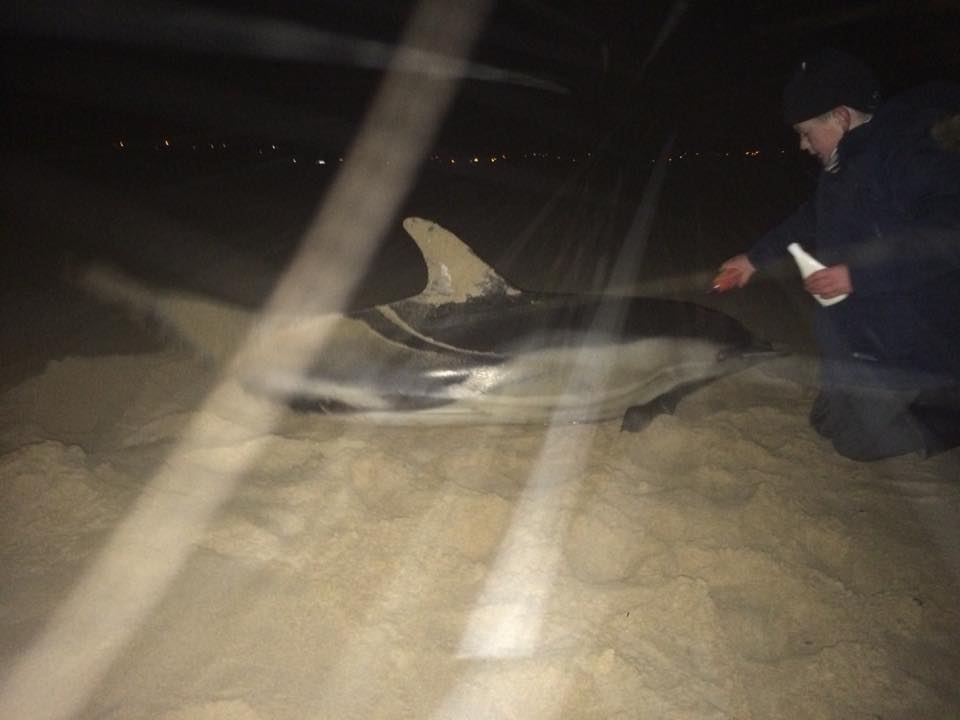 Locals attempted to save a stranded dolphin only for it to tragically restrand.

The dolphin was discovered on Friday afternoon at the Ballyness beach in Falcarragh, and after Selkie Sailing appealed for people to help them to rescue the dolphin, the response was overwhelming.

The Irish Dolphin and Whale Group have now launched an investigation into the reason for the standing.

Gareth Doherty of the Donegal IDWG told Donegal Daily that a group of fourteen people helped the male common dolphin, with more people arriving to assist the rescue when they were leaving the beach. Many others had messaged Selkie Sailing on Facebook to offer a helping hand.

It is estimated that the dolphin had been out of the water since around 1pm due to its position from the tide, and with the wind and sand blowing against it all day, things weren’t looking good. The report reached the Donegal IDWG at 7:30pm just as the tide began to come in with volunteers responding immediately.

“By the time we got there we got a few people from the IDW group to help out. The tide was coming in by the estuary so any chance the animal had to survive meant it had to be released somewhere with a seaward current. We lifted it with a tarpaulin onto a van and brought it around to Magherorarty pier where conditions were slightly calmer,” he explained.

“You can tell when you’re putting this animal back in the water if it is strong or weak by how it is swimming. It was weak, but what else were we going to do? We couldn’t let it die on the beach.

“You’ve got to be with it for a half an hour or so depending on the situation, to hold it up and put the water around it again. If not, it could sink and drown. It swam off but it was swimming in circles around the pier. It then did swim out and we couldn’t see it, it was dark, and it never turned back so that’s all we could do.

“I went over and checked again yesterday morning and it had restranded.”

The dolphin is now being taken to Cork University for a necropsy, which will determine the reason for the stranding.

Unlike the bottlenose dolphin, the common dolphin lives far offshore, but can sometimes venture 2 to 3 miles towards the coast to feed on mackerel, herring and squid. It is highly unusual for a common dolphin to be near the shore.

“The dolphin wouldn’t have lost its navigation and it wasn’t caught by the tide, so there was something wrong with it. The only reasons common dolphins came ashore is if they are sick, old, or bycatch.”

Gareth says that at this time of year dolphin and whale strandings are at their peak (between late November and March/April), coinciding with the mackerel fishing season. The IDWG attributes many of the strandings to the large fishing vessels off the coast that catch the dolphins in their nets, where the mammals can drown or sustain injuries. The fishermen throw the dolphins back to sea, but often the damage is done.

Sadly these statistics are on the rise. The IWDG says that up until 2011, they had never had more than 150 validated cetacean stranding reports. The reports have continued to rise, with 219 reports in 2013, and 212 reports in 2016. In just the first eight months of 2017, the IDWG had received 201 validated cetacean stranding reports – an increase of 30% when compared to the previous two years.

“I have had about seven reports of stranded animals this winter between Dunfanaghy through to Arranmore. Last year four animals were found within a three-mile distance of each other on the shore so there must have been a reason as they never swim in together. They must have been thrown overboard when they were already dead.”

Gareth is also concerned about local seabirds who rely on fish for food. Birds such as puffins and guillemots in particular are suffering, whereas other birds such as gannets have taken to following the fishing vessels to capture the bycatch.

“The ecosystem is being massively impacted. At some point someone is going to have to say stop before we lose everything. One day last summer there wasn’t a bird to be seen by the coast. If I had went out 10 or 15 years ago I would have seen ten different species.

“We have to eat fish, but fishing needs to be done in a sustainable way.”

The IDWG have recently launched a new post-mortem scheme for stranded dolphins and porpoise on Irish shores.

The results of this dolphin’s necropsy will be known in the coming days.

Donegal was home to the first regional group of the IDWG, with the voluntary group being established in association with the IDWG in 2013 allowing better networking and faster response times to assist dolphins and whales in need.

Information and statistics sourced via the IDWG’s official website. For more, see http://www.iwdg.ie/.