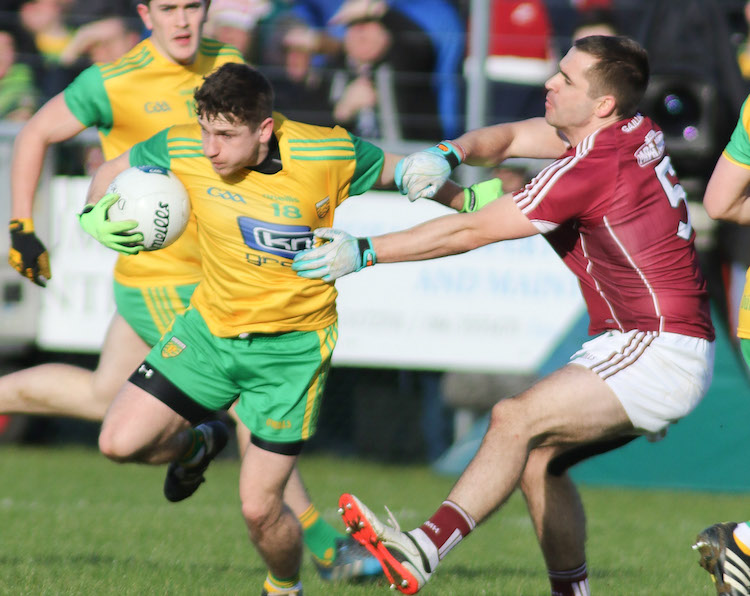 For the second week in a row, Donegal were pipped at the post as Sean Armstrong’s late point gave Galway a win in O’Donnell Park.

In front of 5,052 on a crisp afternoon, veteran Armstrong was summonsed from the bench to kick the match-winning score.

A minute from the end of normal time, Armstrong found a chink of light to snatch the win and make it two wins from two for the Tribesmen, who lit the fuse with a first-half goal by Eamonn Brannigan.

It’s now just two wins in 11 League games at O’Donnell Park for Donegal since senior inter-county football made its return to the venue in 2007.

And they were out of luck here on a day when Galway showed the greater nous at the vital times.

Donegal briefly led when the inspirational Patrick McBrearty – who boomed over nine points for Declan Bonner’s team – arched over in the 42nd minute, but it was short-lived as Galway soon regained a foothold.

The teams were level three times in the last 20 minutes before, finally, the experienced Armstrong, only just on as a substitute, notched up the match-winner.

Donegal were pipped at the post last Sunday in Killarney, when a brace of late points by Kerry left them empty handed and with Dublin at Croke Park next on their agenda, life doesn’t get any easier for a new-look Tir Chonaill.

The game’s big score came in the 15th minute when Brannigan struck gold.

Declan Kyne made the play. The corner-back was out of his comfort zone as he strode into Donegal territory, but his patience and precision were key. Kyne waited for the right moment before off-loading to Eamonn Brannigan.

Donegal’s rearguard parted and Brannigan cruised into the space before slotting past Peter Boyle.

During the week, Declan Bonner talked of his project and outlined just how Donegal were in a period of transition.

The Donegal boss noted that they would not be the finished article over the course of the Allianz League. “It might take two or three years,” he cautioned.

Particularly in the absence of Michael Murphy, who will be sidelined for most of the League campaign, McBrearty’s presence will be vital.

The Kilcar man kicked ten points last weekend in Killarney and had six on the board here by the time Padraig Hughes, the referee, blew for half-time.

Kyne’s goal gave Galway a command of things after a tit-for-tat opening that saw a trio of McBrearty points keep Donegal on level terms.

Galway had two points in the first 90 seconds through Damien Comer and Paul Conroy and Brannigan’s goal gave them breathing space.

McBrearty, though, was a one-man band at the other end and his sixth brought Donegal within a goal after a Shane Walsh brace at the other end. Galway punished a slack kick-out from Donegal for his second point in a matter of seconds, which threatened to derail Donegal.

After an energy-sapping and agonising loss to Kerry a week ago, Donegal showed three changes to with Boyle, Stephen McBrearty and Darach O’Connor coming into the starting XV.

Stephen McBrearty and Paul Brennan kicked points late in the half and it was delicately poised as the refreshments loomed, with Galway 1-7 to 0-8 in front.

Boyle’s reflexes prevented a second goal, albeit at the expense of a point, when he brilliantly turned over from a batted Comer effort after a move involving Patrick Sweeney and Johnny Heaney.

That came in between a pair of points from the McBrearty brothers, before Patrick’s eighth of the afternoon brought Donegal level for the first time since the opening quarter.

Ryan McHugh, with a magnificent curling effort, and a fisted point by sub Ciaran McGinley twice had Donegal on level terms, but Armstrong conjured up the winner, just when Donegal were beginning to look like good value for, at least, a share of the spoils.