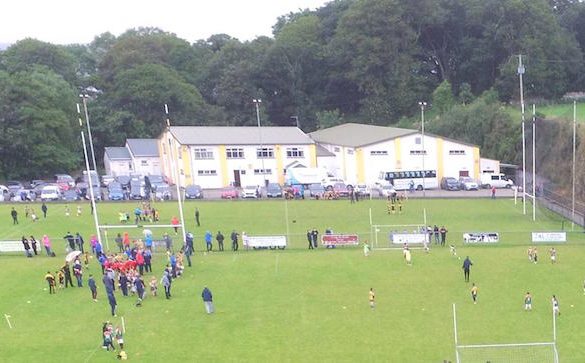 A leading Donegal GAA club has had its bar license renewed despite claims of underage drinking and unauthorised gambling taking place there by a local person.

Malin GAA Club had their bar licence renewed after objections from a local resident were dismissed following a lengthy hearing at Carndonagh District Court last Wednesday.

These were dismissed, as were technical objections based on the club’s correct address as included on the licensing application, and the alleged procurement of alcohol from the UK.

Counsel and officials from Malin GAA claimed that Ms Conway’s allegations against the club were borne out of personal disputes involving her now deceased husband, something she strongly rejected.

An Garda Síochána had no objection to the renewal of the club licence.

Ms. Conway claimed that children were in the premises after 9pm when members of the club were drinking alcohol. She also alleged that club regularly had unlicensed drinking after hours and that they were buying their alcohol from Northern Ireland, without paying the duty on it.
Finally, Ms. Conway raised concerns with the address of the club. She said the clubhouse is registered as Millbrook Terrace, Malin, a residential area where Ms. Conway told the court she grew up.

However, she said when they were applying to build a clubhouse and provide a bar they used the address of Carrowmore, Malin. She claimed this would give the illusion that the clubhouse would not be situated in an residential estate.

Barrister for Malin GAA Ivan Toner argued against each of the points, creating at times, a tense and emotional atmosphere due to exchanges with the objector, Ms. Conway.

Giving evidence she said that her children, aged 13 and 15 at the time, were ‘encouraged’ by the club to attend pool competitions every Sunday night. She claimed they were in the premises where alcohol was being served and would often be there until after 11pm at night.

Mr. Toner argued that ‘as a mother’ would this not be an issue for her. But she said she was unaware that there was a bar on the premises and when she learned this they were no longer permitted to attend.
She claimed that the club ‘were trying to lure’ her children into ‘an alcoholic den’, adding that she had photographs of her son in the presence of the club chairman when he was drinking alcohol, however she could not produce them in court.

Mr. Toner said there was a pool competition held in the clubhouse on a Sunday night, but it was held in a different room to the bar area and was in an unlicensed area of the building.

He suggested to Ms. Conway that if she had a problem with the club then perhaps it would be an idea to withdraw her children from Malin GAA Club.

However taking offence to the suggestion, Ms. Conway asked if they was what they ‘expected her to do?’ She said the fact her children play football for Malin shouldn’t have anything to do with alcohol or drinking.
Ms. Conway also claimed that the Gardaí attended the premises on July 8 to close the premises after she contacted them at 12.30am. She claimed there is ‘regularly’ unlicensed drinking on the premises.

Mr. Toner said it was a ‘matter of fact’ that Malin had no convictions for serving after hours and the Gardaí were not objecting to their application.

However Ms. Conway claimed this was because of the close relationship they have with the guards.
“There is no law and order in the place,” she told the court.
“And because the chairman’s brother is a guard that is not going to change. It is a disgrace the way they are running the place.”

However, Mr. Toner refuted this. He argued that true basis of Ms. Conway’s objection was a personal one, confirming with Ms. McColgan that there had been ongoing issues with the late Mr. Conway.

Ms. McColgan told the court that Mr. Conway had been barred from all GAA grounds in Donegal following an alleged incident which they witnessed on their grounds.

Taking grave offence, Ms. Conway said this was ‘nothing to do with her husband’. She said she objected to his name being brought up, adding that he was not ‘cold in his grave’.

The court heard that Mr. Conway passed away unexpectedly at the end of October last year.

Standing up and clearly emotional Ms. Conway said: “I’m not going to let them use my husband’s name, this has nothing to do with him.

“He is dead and I’m not here to discuss my dead husband’s affairs. It was a different case and there was nothing proved against him. It is out of order as he isn’t here to respond to these claims. I am not happy about it and I will keep objecting to his name being used.”

Judge Paul Kelly told Ms. Conway that Mr. Toner and Malin GAA were entitled to question the motivation behind her complaint, however he warned the barrister to ‘stread carefully’.

He also warned Mr. Toner and Ms. Conway that they were not permitted to shout over the top of each other.

In relation to the claims of unauthorised gambling, Mr. Toner explained that this was a one off charity Texas Hold’em event. Ms. Conway said they were advertising the event on Facebook and were offering a €30 buy in fee, with a €20 top up.

Mr Toner said it was not against the law to hold a night such as this as long as there was a cover charge and there were no paying stakes as the night went on. He said this was a charity event run by a number of local students who were going to Honduras to carry out charity work through their university.

Judge Kelly raised concerns regarding the ‘top up’ option. He said the law permitted poker nights in the case of a one off payment, he said this meant ‘top ups’ were not allowed.

Club Treasurer John Byrne, who was present on the night and who played poker, said the event was ‘very poorly attended’ with many people not arriving on the premises until much later. He said there were no top ups purchased and patrons bought in for €30 only. He said half of the overall pot went to the charity while the other half was given out as prizes.

Ms. Conway said she didn’t accept that all of these private functions were fundraising events. She said she had been informed by the GAA that the bar in the clubhouse was to support the club only and not to hold private functions. She said the night she contacted Gardaí on July 8 that there was a 50th wedding anniversary taking place.

The court heard that this was also a fundraiser but Ms. Conway didn’t accept this.

“I don’t accept that every time they have a function it is a fundraiser for charity – that’s how they’re covering up what they’re doing,” she added.

“The 50th birthday party was supposed to be for the Alzheimer’s Association in Carn, but that doesn’t exist,” she claimed.
Club secretary Ms. McColgan said the club received no money from these events and the clubhouse was there for the use of club members.

Meanwhile in relation to the other two objections, Mr. Toner handed documents into court proving that the court address was Carrowmore, Malin and was not listed as Millbrook Terrace. He also argued that Ms. Conway had no evidence that the club bought their alcohol in the UK, with Ms. McColgan saying they could prove where they got all their drink.

Ms. Conway admitted that she had been told this by someone who previously worked in the bar and had never been inside the premises to see the alcohol for herself.

Judge Kelly said he acknowledged that Ms. Conway had ‘very strong feelings’ about her objections and he sympathised with her on the death of her husband during the proceedings. However he dismissed all her objections. He said in relation to children being on the premises after hours, there no evidence that the children were in areas where drinking was taken place. He said Ms. McColgan told the court that the children were in areas that were not licensed and that was not challenged so he accepted her evidence.

Regarding the allegation about serving after hours on July 8, 2017, Judge Kelly said usual licensing laws permitted Malin GAA Club to serve until 12.30am on a Friday night/Saturday morning anyway. He also disregarded the claims of UK alcohol being served as there was no evidence to suggest that and the queries over the address as the documents clearly showed the address on their documents and planning permission as Carrowmore, Malin.

Finally, the claims that unauthorised gambling was taking place were up for debate. While Judge Kelly did raise concerns about the ‘proposed top up’ at the Texas Poker night, he accepted the unchallenged evidence of Mr. Byrne that the top up option was not available. He said the club ‘didn’t appear to run foul of the law’ by simply offering patrons a one off pay in of €30, but if they had offered more than one charge it could have been against the law.

“The law seems to prohibit a second charge but we have heard that it didn’t happen here so I will disallow [Ms. Conway’s] objection on that basis,” Judge Kelly said, renewing the club’s annual drink licence.
However Judge Kelly asked Mr. Toner and the club solicitor, Catherine O’Doherty, to have a discussion with the club officials and address some of the issues raised in court that day.

He said the Gardaí were also aware of some issues and that they should ensure that licensing laws are upheld at Malin GAA Club, and indeed every GAA club in the county.