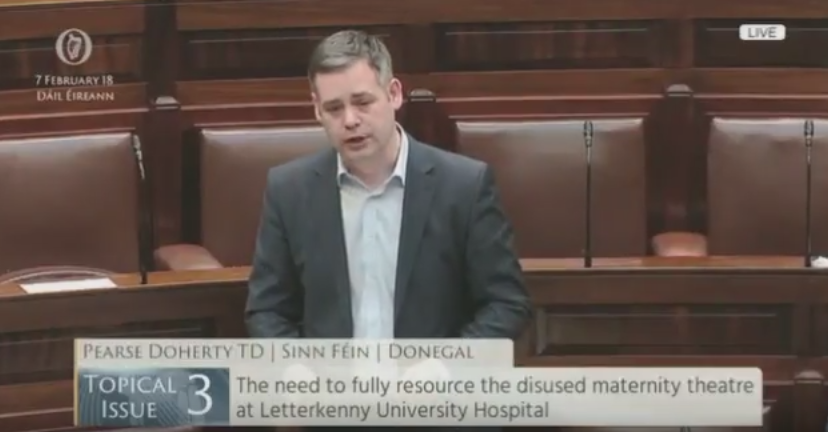 Watch: TD demands opening of maternity theatre at LUH that has stood empty for 18 years

Speaking in Dáil Éireann today, Deputy Doherty says that when pressed LUH management for an explanation of why the theatre was never used, he was informed that it was due to a lack of resources such as necessary staffing.

The theatre had been built in 2000 as part of the redevelopment of Letterkenny hospital’s renal dialysis block – yet it has stood empty for eighteen years.

Minister of State for Special Responsibility for Mental Health and Older People, Jim Daly TD has committed to “refocusing” government efforts in a bid to commission the maternity theatre “sooner rather than later.”

To put the length of time it has been lying empty into context, Doherty said that the Minister of Health, Simon Harris, would have been just fourteen years of age when Bertie Ahern announced the new development in 2000.

“Over that whole period not one mother has had the benefit of using that theatre that the taxpayers of Donegal and elsewhere spent a lot of money in creating,” he said.

Doherty slammed the “sheer incompetence of successive governments”, saying: “At worst it can be labeled for what it truly is – it’s neglect of a part of a county which has been neglected time and time again by successive governments and that, in my view, is shameful and it’s a dereliction of their duty towards the people of Donegal but in this instance particularly it’s a dereliction to their duty towards the women of Donegal.”

The situation is exacerbated by the ongoing overcrowding crisis at the hospital.

“To make matters worse this comes at a time when the hospital continues to experience record-breaking levels of overcrowding,” he said.

LUH has a total of five theatres. Four are currently in use, however one is reserved for the maternity unit as the purpose-built one constructed in 2000 was never commissioned. Out of the five theatres, just three are used full-time.

“That is not an effective use of resources and that has been the case for the last eighteen years.”

“[The unused theatre] takes up half of the entire floor of where the maternity centre is.

“And to make things worse, a mother who’s given birth and develops complications in the maternity suite – what should happen is they should go next door to the theatre for an emergency Caesarean section, what now happens is they have to be wheeled out of the maternity unit, up the halls, into a lift, taken to a different floor where the theatre is where they can be operated on.

Minister of State Jim Daly TD applauded Doherty’s call for action, and says that a “refocus” is needed.

“It’s something that can be achieved I believe,” Daly said.

Daly adds that he hopes for the HSE to collaborate with Saolta Group to get the theatre opened “the day before tomorrow, sooner rather than later.”