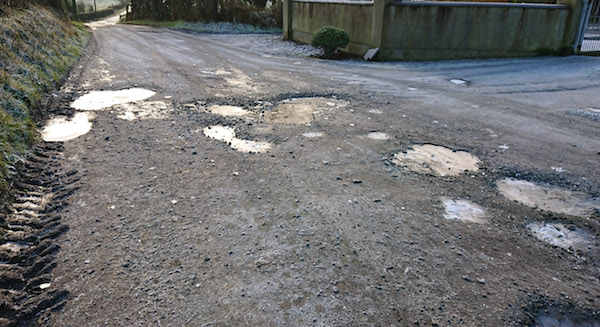 TDs have slammed the “dreadful state” of Donegal’s road infrastructure, saying that the road network is “crumbling underneath the pressure of traffic and lack of investment.”

Fianna Fáil TD Robert Troy says the failure by the Government to invest in roads infrastructure has resulted in poor conditions on local and regional roads across the country.

The Fianna Fáil Spokesperson on Transport, Tourism and Sport made the comments in advance of Fianna Fáil’s Dáil Private Members Business debate which calls for a significant increase in funding for roads maintenance. The motion is set to be debated in the Dáil later this evening.

Deputy Troy said: “Many regional and local roads are in a dreadful state as a result of the Government’s failure to invest in roads infrastructure.

“A recent report carried out by the National Oversight and Audit Commission (NOAC) found that almost 70% of regional roads have serious structural and surface defects.

“This has led to serious safety concerns for road users and increased maintenance costs to motorists.

“Over the last 5 years the Government has on average provided Local Authorities with less than half the amount of funding they need to maintain their roads. This is despite a commitment made in the Programme for Government to increase the capital budget for regional and local roads by approximately 50%. The Government has failed to deliver on this commitment and the end result is terrible surface conditions for road users’ right across the country.

“At least an additional €163m is needed each year to maintain our road network to safe standard. The motion we have put to the Dáil calls on the Government to significantly increase funding for regional and local roads through the Capital Investment Plan. It also calls for a full response to the findings of the NOAC and a detailed plan to address the issues and defects identified in this report.

“TD’s from all sides of the house are inundated with complaints from road users about poor conditions on local and regional roads. There is an onus on us all to come together and hold the Government to account on this issue. Fine Gael and their Independent colleagues must deliver on the commitments they made through the Programme for Government,” Troy concluded.

Troy’s Fianna Fáil colleague Donegal TD Pat the Cope Gallagher added: “There is a particularly urgent need for additional resources for Donegal roads as the roads network is currently crumbling underneath the pressure of traffic and lack of investment.”

“This issue is as much about saving lives as it is about infrastructure.

“Too many lives have been lost on Donegal roads and a concerted effort must be made to make the necessary improvements to ensure our roads are as safe as possible.