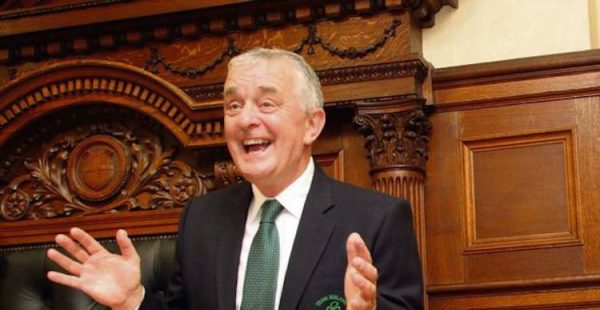 He will follow the President of European Athletics Svein Arne Hansen who was the popular guest speaker at last year’s Awards.

As founder and team leader of the Finn Valley club in East Donegal, he has been active in practically every aspect of the sport since his return from studying Physical Education London in the late 1972 and established the Donegal County Athletics Board , and the county schools bodies all of which are a testament to a vibrant athletics scene in the area to this day.

During the quarter of a century at the helm of the national team, the Donegal man oversaw unprecedented success including Irish athletes winning 2 Olympic medals, 9 World Championship medals and 27 European Championships medals.

An honours graduate of St Mary’s College of Physical Education in London in 1972, the Ballybofey man was one of the early pioneers of full time PE teachers in Ireland holding a position as a sports lecturer at Letterkenny Institute of Technology at his retirement in 2012 .

It was from this base that saw McGonagle selected to manage the national team on a record 68 occasions including 4 Olympic Games, 6 World and 6 European Athletics Championships.

His experiences building the Finn Valley Athletics Club into a world class community sports facility, is most impressive .

The club was recently recognised by IAAF President Sebastian Coe, when a team of Finn Valley juveniles were invited to be kit carriers at the London 2017 World Championships last August.

Since its foundation in 1971, Finn Valley athletes have won over 300 National titles at all age groups and is easily the most successful club in Donegal of any sporting code.

The Finn Valley A C Centre’s facilities have expanded beyond an athletics track, swimming pool, astro turf, restaurant and indoor conference facilities in what is a great example of coordinated sports facilities for the community.

As recently as last weekend, Sommer Lecky, a talent from the primary schools programme , a young high jumper from the club defeated the Rio Olympic silver medalist when equaling her Irish Junior
Record and it seems a perfect fit that Mc Gonagle would be offered the opportunity to deliver to the next generation of Irish athletes all of whom will be recognised on the occassion.