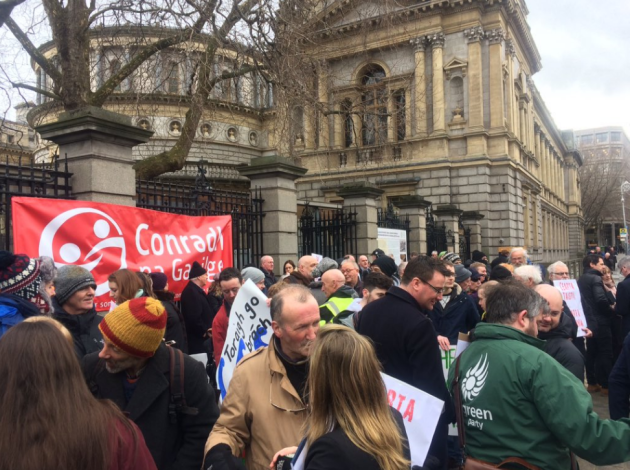 Pearse Doherty TD has renewed calls for the Government to intervene in the ongoing controversy over the proposed new Tory Island ferry service.

The Sinn Fein Deputy’s calls were made amid growing anger over plans to service the island with a vessel which is over forty years old. A protest which took place at the gates of Leinster House yesterday (Thursday) organised by members of the Tory island co-operative in opposition to the plans.

Deputy Doherty said: “I was more than happy to come out and join representatives from Comharchumann Oileáin Torai, islanders and supporters during yesterday’s protest outside Leinster House as part of their campaign in opposition to proposals for the island’s new ferry service.

“This protest has been organized by the Co-Op in an effort to highlight their opposition to the planned new ferry service which it’s proposed will service the island from 1st April 2018.

“The contract for the new service, which is due to commence on 1st April this year, was awarded to the operator of the ‘Queen of Aran’, a boat built some 40 years ago.

“The age of the vessel has prompted many islanders and commentators to question the suitability of the ship for the crossing, including fears over the safety of the vessel.

“In fact, several families who currently live on the island have publicly stated their intention to leave Tory permanently should these proposals go ahead.

“Clearly, this is a very concerning and deeply worrying situation and raises real doubts over the future of Tory island which is a truly unique place and a strong Gaeltacht island community.

“As part of this campaign, I was happy to arrange a meeting between representatives from the Co-op and other Oireachtas members from across the various different political groupings this week with the view to discussing this issue and to allow the islanders the opportunity to voice their concerns.

“While this week’s protest and follow-up discussions were extremely constructive, clearly the ball is very much in the Government’s court now if a resolution is to be found here.

“Yet instead of offering credible solutions, all we’ve heard to date from the Department is some nice words on how it wants to alleviate the concerns of islanders without actually offering any meaningful solutions.

“I am once again calling on the Government to take urgent action and intervene in this controversy because otherwise there is a real risk over the future of this proud island community.”