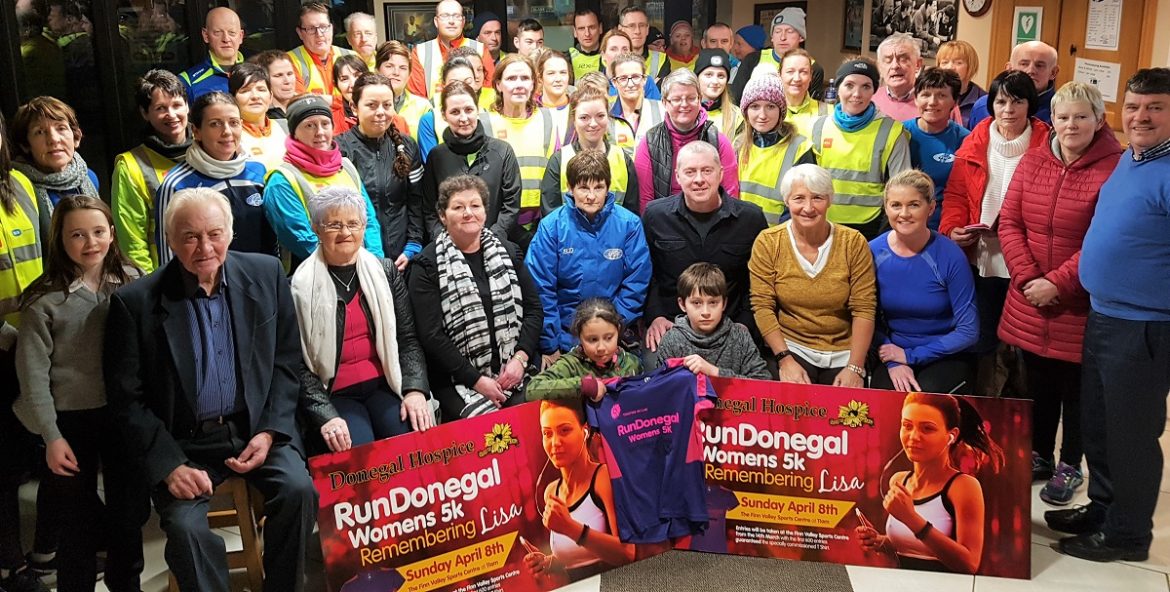 Women all over Donegal and beyond are invited to get ready for the RunDonegal Women’s 5K 2018 in aid of the Donegal Hospice.

Plans have been finalised for the event this April 8th, which will be held in memory of Castlefinn woman Lisa McGranaghan.

Donegal Sports Partnership is lending its support to the event, with plans to make this the biggest women-only participation event in the North West. 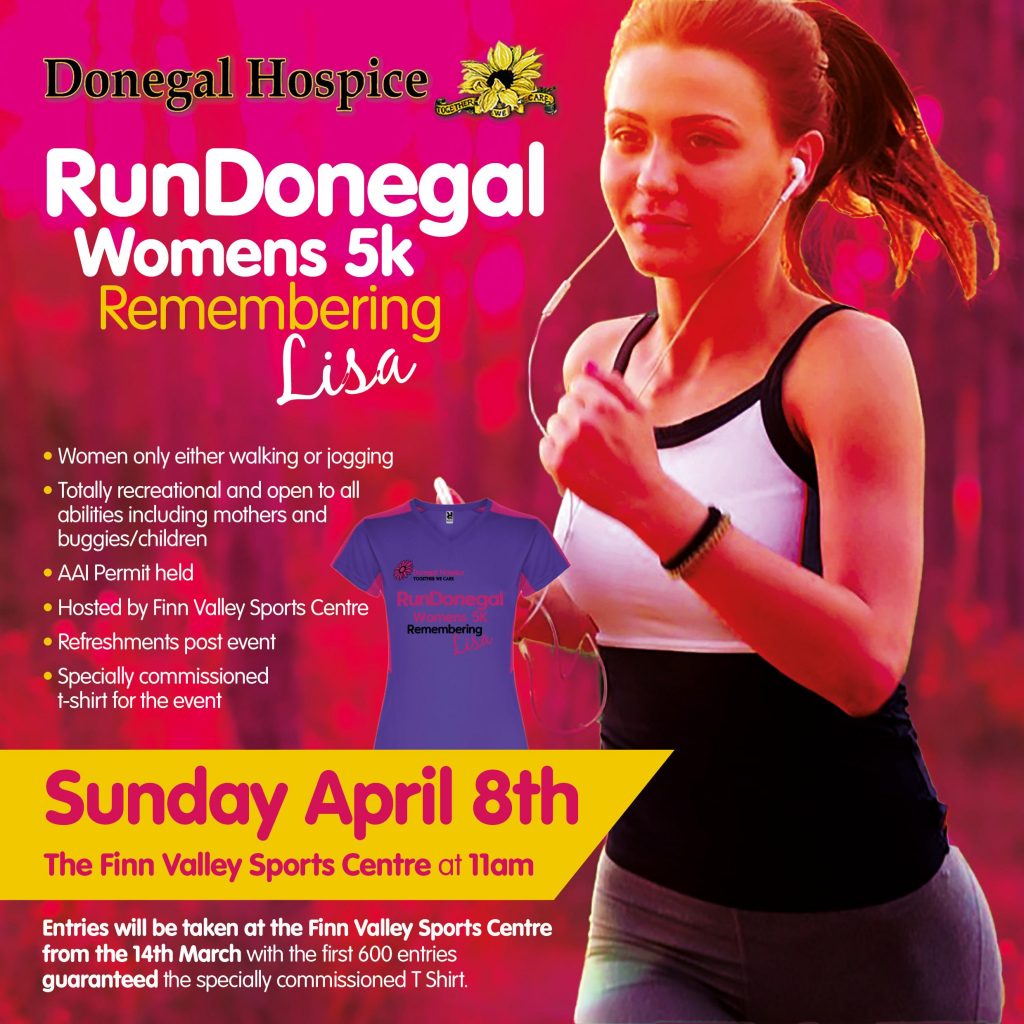 Details of the event, which will take place on Sunday, April 8th, were announced in the Finn Valley Sports Centre, Stranorlar on Wednesday night.

Next month’s event will be held in memory Lisa McGranaghan, a married mother of two from Castlefinn who passed away from cancer at the Donegal Hospice in March, 2016.

Run Donegal – the brainchild of Grace Boyle and Bridgeen Doherty – has become a major fixture in the local running calendar. Thousands of women of all ages, backgrounds and abilities have taken part in the event which was first held in 2007.

Looking ahead to what will be the twelfth staging of Run Donegal, Grace Boyle, who is also Donegal Hospice Chairperson, is getting ready for another big day at the Finn Valley Sports Centre.

“This event has come a long way since we held our first women’s only race in Donegal. It was a 3K and the reason we weren’t for the shorter distance was to make it that bit easier for women to get out and get involved. That has certainly changed now. There are far more women taking part in local races now than ever before and 5K is most certainly the preferred distance,” Grace said. 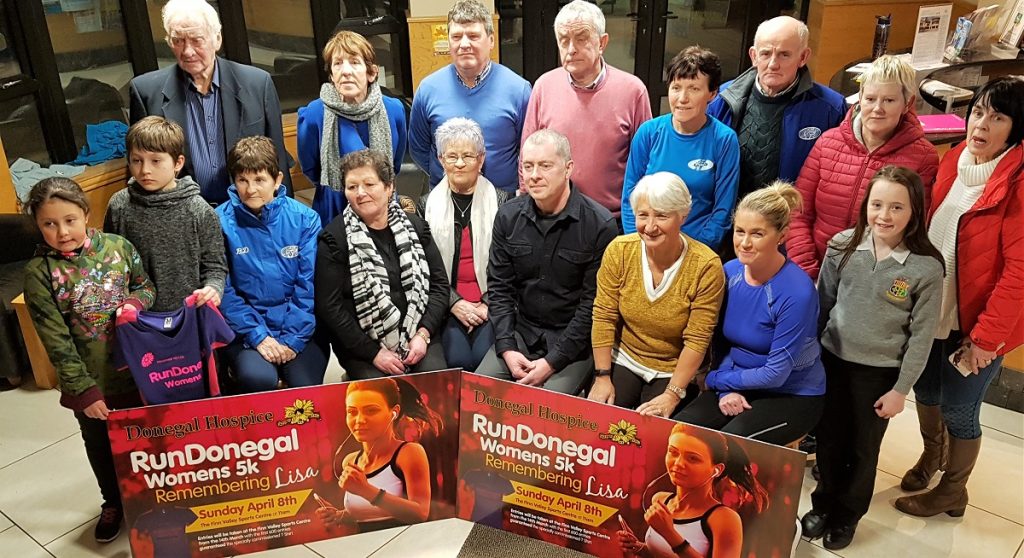 “It started off with a couple of dozen women running a lap of Ballyraine in Letterkenny. We changed it to a 5K and based it at Glenveagh before taking it to the Twin Towns. Finn Valley AC and Patsy McGonagle have been extremely helpful and accommodating. We have the use of the facilities for the race – all participants can shower and have refreshments afterwards. We also use the Finn Valley AC 5K route, so as organisers of the race, we don’t have a whole lot to do,” she added.

The first 600 who enter Run Donegal 2018 will receive a specially commissioned t-shirt and the organisers are planning a registration night later this month.

“We are encouraging all women to come along and take part on April 8th – be they racers, runners, joggers, walkers or mothers with buggies. It’s always been a great family day and we want that them to continue.” 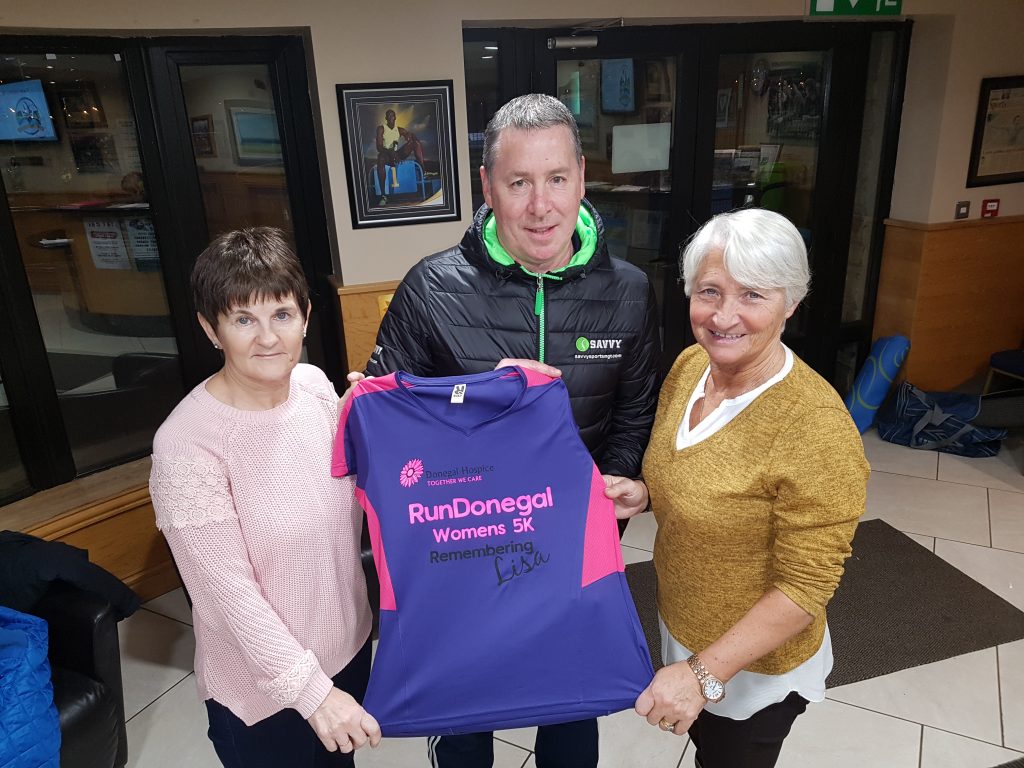 Launch of the RunDonegal Women’s 5K 2018

“Run Donegal is a great concept and has grown over time. So many of the women who are taking part regularly in local races started running though Run Donegal. It’s fantastic to see the huge increase in the participation of women on the local circuit.

These type of events give women a great opportunity to get involved in walking and running, or in some cases, a chance to return to a sport they were involved in and liked in their younger years,” Myles commented.

“The event also raises money for worthy causes, so it’s win-win for all concerned,” he added.

“Operation Transformation, which has been a huge success once again locally and nationally, has just come to a conclusion. Run Donegal can be something for those who took up the Operation Transformation Challenge to focus on now. As the days get longer and I would urge all women to get walking and running and give it a go on April 8th,” Myles said.