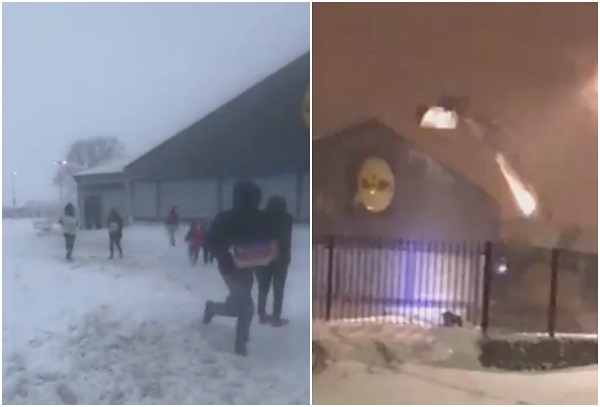 Eight men aged between the ages of 24 and 47 have been charged at the Criminal Courts of Justice in connection with a string of incidents in west Dublin last night.

A Lidl store in Fortunestown was looted yesterday evening before culprits bulldozed the premises with a stolen digger.

Five of the accused have been released on bail with the other three being remanded in custody, according to Independent.ie.

Lidl in citywest has been looted and now destroyed. Absolutely disgraceful. People in the area will probably running low on supplies and needed this store and now it’s been destroyed. Wankers. #StormEmma #BeastFromTheEast pic.twitter.com/YVwHsCcBTt

The bucket of the digger was then used to try and open a safe.

They’ve only gone and robbed the safe out of Lidl. This is why we can’t have nice things, lads. pic.twitter.com/lEqdb0aJYY

The road to Lidl was impassable for Gardaí due to the heavy snow, with the gang allegedly further blocking the roads with barricades to hinder emergency servcies’ response to the incident. It was also alleged that Gardaí were attacked when they attempted to maintain order last night, with the Army being called in to assist Gardaí.

A photograph of a Lidl store on fire purporting to show the scene at Fortunestown circulated on social media last night, however this image was of a German Lidl in 2016.

Dublin Fire Brigade sent three fire engines from Tallaght and Dolphin’s Barn to the supermarket on Fortunestown Lane last night, but later reported that no fire was found at the scene.

We’ve left the scene of the supermarket in #Fortunestown #CityWest , no fire found. Gardai are attending the incident pic.twitter.com/BO5SzOASNd

Lidl Ireland released a statement last night, saying: “We are aware of the very serious incident at our Fortunestown Lane store this evening. Given that the incident is now the subject of a criminal investigation we are not in a position to comment further at this time.”

A JCB was also stolen yesterday, with culprits joyriding through the area.

Just seen video of Lidl in City West getting looted and lads on a stolen JCB in Jobstown #StayClassyTallaght pic.twitter.com/bcXDH4om8k

Damage was also done to a Centra shop in Jobstown, where raiders cut a hole in the shutters before looting the premises.

Local TD Seán Crowe says that those responsible for these criminal acts are not representative of the vast majority of good people in Tallaght.

“While the vast majority people in Tallaght are worried about weather conditions, getting to work, supporting their neighbours and helping the elderly, criminal elements have brought shame by looting and destroying local businesses,” the Sinn Fein TD says.

“The last few days have been full of positive stories of people pulling together but the criminality witnessed tonight in Tallaght is generating huge anger and frustration.

“There must be a speedy and effective policing response from An Garda Síochána. It is also important to note that these criminal acts are not representative of the vast majority of good people in Tallaght. In fact, the people of this area are absolutely fuming at this evening’s events.

“My sympathies and my thoughts are with those who will undoubtedly lose their jobs and their livelihoods as a result of this madness,” Deputy Crowe concluded.