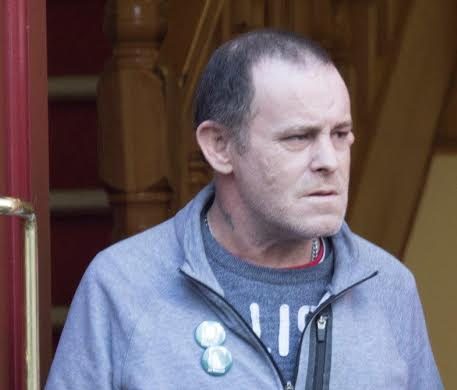 A 49-year-old, with 41 previous convictions, who has ‘a problem with cars’ has been ordered not to ‘go next nor near a motor vehicle’

Carl Ryan, of 20 Burnwood, Magheranture, Burnfoot, was given a four-month suspended sentence and disqualified for five years after being found driving with no licence or insurance.

Ryan was observed by Garda Duggan, while off-duty, getting into the driver’s seat of a black Vauxhall Corsa at Main Street, Buncrana at 9.08pm on July 7, 2017.

Inspector David Murphy said Ryan had ‘revved the engine’ when spoken to by Garda Duggan.

Ryan had no licence or insurance certificate at the time and offered to produce documentation at a station in Cork.

Garda Duggan cautioned Ryan – who was disqualified from driving at the time of the offence – and detained the vehicle, which was subsequently destroyed. Ryan

Defending solicitor, Ciaran McLaughlin, said Ryan, originally from Ballyfermott in Dublin, had an opportunity to move into a house in Buncrana.

“He was homeless and he moved in with his cousin, for whom he is the main carer,” McLaughlin said.

“He had a major drink problem. He had a drug problem, which he dealt with. His doctor advised him to stop drinking.

“Normally, he behaves fairly well, but he has this problem with cars.”

Judge Gerard Jones gave Ryan a four-month prison sentence, suspended for two years, and disqualified him for a period of five years. Ryan was bound to keep the peace and Judge Jones added: “You are not to go next nor near a motor vehicle’.

Judge orders man with string of convictions not to ‘go next nor near a motor vehicle’ was last modified: March 8th, 2018 by Staff Writer
Tags:
buncranaBuncrana District CourtCarl RyanJudge Gerard Jones