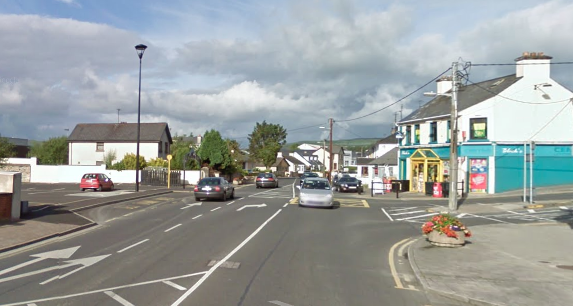 The Mayor of Donegal, Councillor Gerry McMonagle, has hit out at the Council’s response to a motion calling for a ‘proper pedestrian’ crossing to be installed at a busy Letterkenny junction.

Councillor McMonagle submitted his proposal to this month’s meeting of the Letterkenny Municipal District in relation to the junction at Skittle Alley.

With Kernan’s Spar, Tin Tai and a public car park all located at the junction, which gets particularly busy at school times, Councillor McMonagle said he had serious concerns.

The Sinn Fein Councillor also asked that the Council review all other pedestrian crossings that are marked by tram lines.

“To paint two white lines and expect that to be a crossing is not on,” Councillor McMonagle told the meeting.

“It is particularly dangerous to pedestrians, cyclists and motor vehicles. There is no sufficient notice that it is a crossing.”

“The Roads Department continually review both controlled and uncontrolled pedestrian crossings throughout the town environs.”

Councillor McMonagle blasted the response from the Council.

He said: “If someone is knocked down and killed, would that make it happen? It’s an accident waiting to happen.”

Mr Doherty said that pedestrian crossings had to come with beacons, adding ‘it isn’t just a case of painting black and white lines’. However, Councillor McMonagle said he has routinely encountered many such crossings without flashing lights, but Mr Doherty said his body could not ‘legally do it’.

“You can, but you just don’t want to. This is not the end of this,” said a clearly irate Councillor McMonagle.

County Mayor hits out after call made to install ‘proper’ crossing at busy junction was last modified: March 15th, 2018 by Chris McNulty