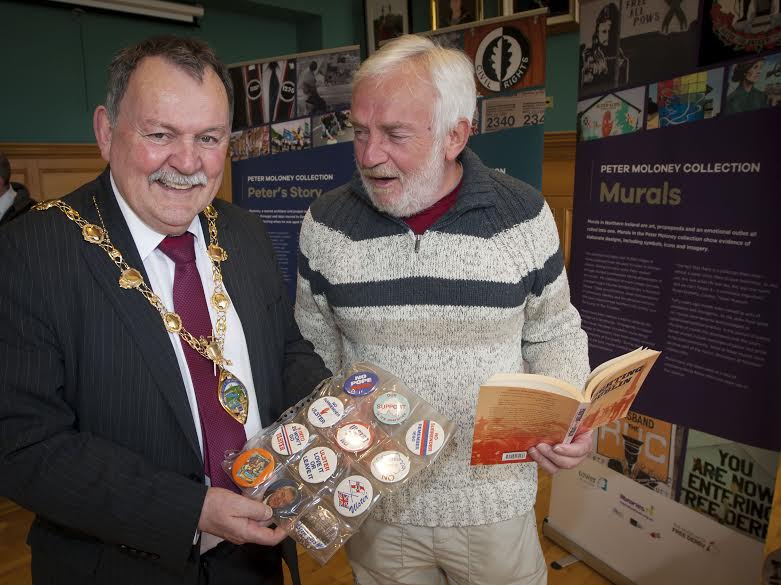 The largest known private collection of memorabilia charting the history of Ireland and the Troubles has made its way to the Tower Museum in Derry and has been marked this week with the official launch of the ‘Peter Moloney Partnership’.

Peter Moloney, a retired London-based architect was born in Buncrana, Co Donegal, and has spent 50 years accumulating his unique ‘Troubles treasure trove’ – a labour of love that began when he was just 15.

His collection contains over 48,000 items – including political propaganda, pamphlets, posters and photographs, as well as badges, cartoons, stickers and t-shirts. As the years passed, the collection became an archive covering Bloody Sunday, the hunger strikes, peace initiatives and other events.

Peter’s unique historical collection has attracted interest from major museums such as the Victoria & Albert Museum in London and the Guernica Peace Museum in the Basque country, but he has chosen the Tower Museum in Derry to be its home and hopes what he has created will be “a motivator for peace and reconciliation and common understanding”.

Donating his unique collection to the Council’s Museum & Heritage Services, Peter said: “Some of my collection may upset people but we can’t rewrite history. My only wish is that people see it and learn from it.

“I would like to take this opportunity to thank my family and friends who have assisted me with the collecting process over many years.

“I would also like to pay tribute to LibrariesNI for the invigorating and exciting conversations I have had with them when initially considering donating my collection.”

Mayor of Derry City and Strabane District Council, Councillor Maolíosa McHugh referred to Peter Moloney’s artefacts as a ‘gem of a collection’.

“I am old enough to remember the events and the locations included in this fantastic collection. Indeed, the artefacts are so important to the city as ‘a resource in every sense’. In a non-judgemental way, we can look back and be fascinated by the tapestry of material included in this collection.”

Jim OHagan, Chief Executive of LibrariesNI explained that they were delighted to be involved with the Peter Moloney Partnership and were really looking forward to “promoting it for years to come.”

Robin Percival, Chair of the Bloody Sunday Trust said that the Museum of Free Derry was ‘over the moon’ that Peter has made his comprehensive collection of nearly 50,000 items available – not least for younger generations.

“At the Museum of Free Derry we welcome young people from across Ireland. They want to know about their own history. Peter’s donation will therefore enhance the experience for our young people. It is a tremendous resource for education” he said.

The Peter Moloney collection has been physically transported to Derry from Peter’s home in Camden, London, and is now under the care of the Tower Museum.

The Tower Museum is working in partnership with LibrariesNI and the Museum of Free Derry to develop a programme of activities to highlight the significance of the collection and create access to it for a diverse range of audiences.

Already LibrariesNI have agreed to take custodianship of the 2,000 books and 3,000 journals which Peter has collected over the years – making these available as a reference collection that will be accessible to the general public.

After the Easter break on Tuesday April 10th at 7pm, Peter will be delivering a talk at the Tower Museum highlighting aspects of the collection from an insider point of view and recounting some tales of his travails while collecting items during ‘troubled times’. The event is free and places can be booked by contacting Tower Museum reception on 028 71372411.