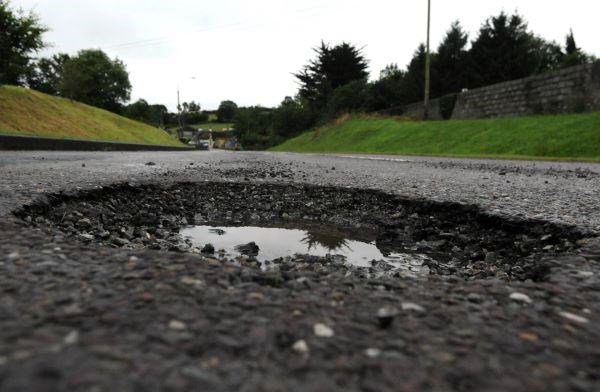 ‘Crater’-like potholes leave Letterkenny roads like ‘surface of the moon’

The Mayor of Donegal, Councillor Gerry McMonagle, says that roads in Letterkenny are ‘like the surface of the moon’.

The Sinn Fein Councillor was speaking at this week’s meeting of the Letterkenny Municipal District after submitting a motion that resurfacing works be carried out at Glencar Irish/Dr McGinley Road estate.

In response, the Council said that the roads within Dr McGinley Road are not on the RI programme, but that ‘minor repair works will be addressed by our patching crew’.

Councillor McMonagle said that the roads in the town had ‘deteriorated rapidly’ since the abolition of Letterkenny Town Council.

“The Town Council would regularly do jobs in these areas and they were kept to fairly good standards,” he said.

“There are 20 potholes in areas in front of houses. They have been patched already, I believe, but the potholes are back again.

“A resurfacing job would need to be done. We’d be out more money continually patching them.”

Councillor McMonagle likened the surfaces in question to the ‘surface of the moon’, adding that there were ‘craters’ in some parts.

He said: “Letterkenny is not getting the same attention it was at the time the Town Council was in place. If you drive around Letterkenny now, we keep being told it’s because Irish Water are doing works here and there, but we have yet to get a definitive response from Irish Water. Our roads are suffering in Letterkenny.

“The weather is emptying the potholes again and the patching just isn’t working. We’re throwing good money after bad.”

Later in the meeting, Fianna Fail Councillor James Pat McDaid called for Municipal District to ‘prepare a report to highlight the need for huge investment in the Letterkenny town roads’.

He called for funding to be forthcoming from Donegal County Council or the Department of Transport.

“The roads are all being dug up and being left in a state where they are very bad for road users,” he said.

“Business people and taxi men have been onto me about them. The holes are being filled in and they just sink again.

“The town is getting abused by the works and we don’t have funding to do the whole thing. Patching up isn’t good enough. Huge investment is needed.

“We need proper roads and infrastructure in Letterkenny. If we’re going to attract business, we need good roads.”

Councillor Dessie Shiels noted that Irish Water would be working on 34 locations over the next 24 months in Letterkenny.

Councillor McDaid added: “The Irish Water work is welcomed, but it’s not acceptable, the state of the roads. We are underfunded, it’s as simple as that. We’re already isolated and this isn’t good enough.”