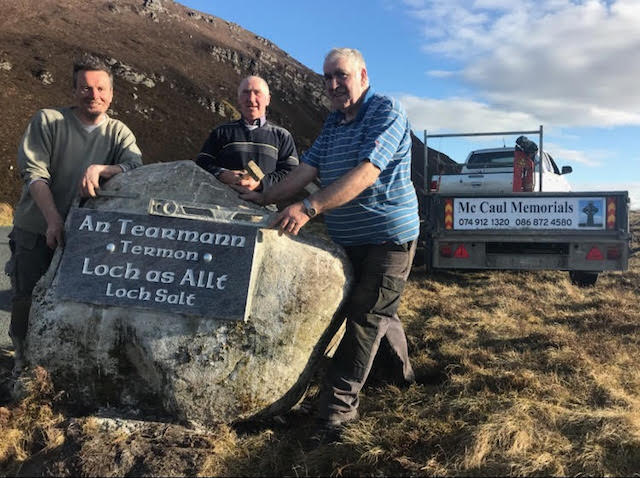 Donegal’s Lough Salt gets its place in Irish heritage

Donegal TD Joe McHugh has announced that Loch as Allt near Termon has been formally recognised by An Coiste Logainmneacha/The Placenames Committee.

Mr McHugh, Government Chief Whip and Minister for the Irish language, the Gaeltacht and the Islands, praised locals behind an initiative to restore the original Irish placename at the remote mountain spot.

“It was more than 20 years ago that hotelier and one time Donegal Person of the Year Dermot Walsh from Carrigart planted the seed in my mind to restore the original name Loch as Allt,” Mr McHugh said.

“We should also praise Seámus Ó Treartaigh for his local initiative and in bringing our heritage to life. Our language is our heritage and it’s a language that we can trace back over 3,000 years.

“Securing the place name Loch as Allt is adding value and a tremendous cultural heritage along the Wild Atlantic Way and the Irish language is at the very heart of that.”

The official name Loch as Allt, meaning Lough out from the Precipice, will be included in a suitable Placenames Order in the future.

Údarás na Gaeltachta sanctioned a grant of €1,000 for a local community project to plant 18 boulders with plaques carrying placenames in the north Donegal Gaeltacht, around Termon, with the first placed at Loch as Allt in the last week.

Seámus Ó Treartaigh, Eugene Trearty and Tony McCaul from McCaul Memorials, Termon were among those involved in the project. In their first piece of work they shifted a three tonne boulder into place with a plaque bearing the name Loch as Allt at the approach to the lough.

Seámus Ó Treartaigh said: “It’s a very scenic spot. All the stones were sourced locally. They are all natural and that’s quite a trying experience in itself.

“In the Termon area, which is a reasonably strong Gaeltacht area, there are large areas where An Gaeilge is widely spoken and for that reason we chose to place the signs as Gaeilge and Bearla.”

The geographical name Lough Salt, located in the civil parish of Kilmacrenan, Co Donegal was re-examined by An Coiste Logainmneacha/The Placenames Committee at a meeting in January 2015.

Following that Loch as Allt was recommended as the most suitable Irish form of the name. According to An Coiste a possible translation means “(the) lake out from (the) precipice”.

Lough Salt is considered to be an anglicised name for Loch as Allt. It is a freshwater, glacial, mountain lough. Tradition has it that the lough is as deep as the mountain is high.