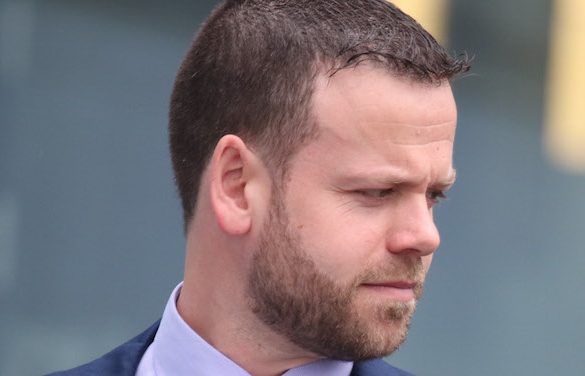 A supermarket manager who stole more than €315,000 to feed his gambling addiction has escaped going to prison because of his previous “impeccable character.”

Wayne Johnston pleaded guilty to stealing the huge sum of cash from the Cost Cutter Supermarket in Ballybofey to pay for bets with his Paddy Power online account.

Letterkenny Circuit Court heard how the father-of-two put the jobs of up to one hundred people at risk because of his gambling.

Johnston, who is in his 30s and originally from Thurles in Co Tipperary, stole sums of hundreds of euro to up to €3,500 before finally being caught.

The court was told that the thefts had a huge personal effect on the owner of the business, Michael Doherty.

The victim said nothing will ever take away the stress and worry as well as the sleepless nights and mental torture that himself and his family suffered.

And he added that without the support of suppliers and partners, the jobs of 100 people would have been in danger.

“I don’t think I’ll ever be the same person again. I lost a part of me,” he said.

The accused told how Mr Doherty was more than just an employer to him and that they had developed a friendship outside of work.

“When the gambling took over I was guilty and embarrassed for taking Michael’s money,” he said.

He added that he never thought of the bigger picture and how it might put the jobs of one hundred people in jeopardy.

“I’m so sorry for what happened. I was very embarrassed and ashamed and I didn’t realise I could have closed doors to his business. I knew I was taking the money but did not realise the damage I was doing to him or his mother and father,” said Johnston.

He said he is now getting treatment for his gambling addiction and his wife Michelle is now in charge of all the family’s finances.

His wife gave evidence saying that the family now speak openly about Wayne’s addiction and if he is ever feeling vulnerable.

The accused said he now has plans to try and back the money to Mr Doherty saying he is prepared to pay €600 each month for the next 30 years as a way of compensating his former employer.

Johnston is currently working for a courier company and his employer is aware of the court case.

Passing sentence Judge John Aylmer said he considered the charge of theft of €315,303 merited a sentence of three years in prison while the other two sample charges merited sentences of 18 months each.

However, he said there were many mitigating factors in the case including Mr Johnston’s impeccable character and that he had no previous charges.

He added that he pleaded guilty at the first opportunity and that he had shown obvious remorse and shame at what he had done.

He said Johnston had a history of a chronic, pathological and compulsive gambling addiction.

The probation service report was very favourable and that it is unlikely that he will re-offend.

Judge Aylmer sentenced Johnston to two years for the first charge and one year each for each of the other two charges to run concurrently.

However, he then suspended all sentences and ordered him to keep the peace and be of good behaviour for three years.

He also ordered him to continue to pay €7,200 per year to the victim.

“This is simply a matter of honour for Mr Johnston to undertake and to pay it over to the victim for rest of his working life,” said Judge Aylmer.

Mr Johnston wiped tears from his eyes and left the court with his wife.