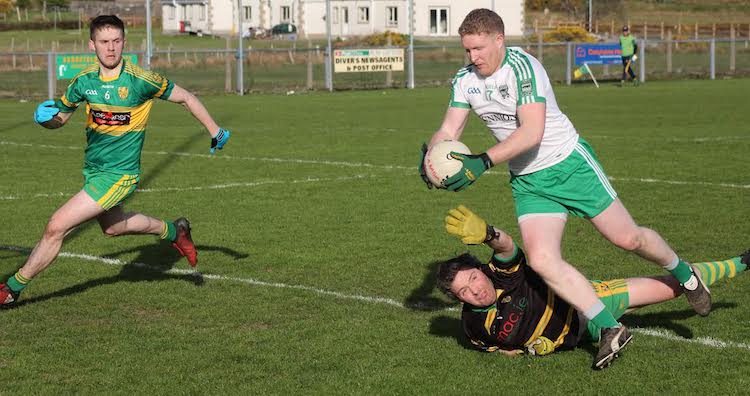 Seán Mac Cumhaills had to dig deep in Kentucky on Saturday evening but came out winners at the full time whistle in a fiercely contested match.

Two goals in two minutes from substitute Darren O’Leary proved the turning point in this thrilling affair at the Pearse Memorial Park. Ardara were the more lethal team in front of the posts in the opening 11 minutes with points from Shane O’Donnell, 2 from Brendan McNelis free kicks and a free from Gareth Concarr launching the home side into a comfortable 4 point lead.

Things could have been much worse for the visitors when the home side had a chance to goal after 5 minutes but MacCumhaill’s corner back Chris Gallagher was on the line to avert the danger. Adam Lynch played in Martin Gallagher who opened MacCumhaill’s scoring account after 11 minutes and scores from Gary Wilson’s free and half-back Andrew McCloskey helped to slow the tide.

Brendan Boyle pointed from play and another McNelis free extended the lead out to 3 again in favour of the home side. Gavin “Fireman” Gallagher was taken off due to injury and Darren O’Leary was the man deployed with less than 10 minutes left in the first half.

Barney Lafferty’s dangerous movement and pace on the ball was causing bother all evening fired over a point after MacCumhaill’s Captain Steven O’Reilly robbed an Ardara man in possession and played Lafferty in. Classon from play and Concarr from another free for the home side reinstated the 4 point lead going into half time.

MacCumhaills scored first blood in the second half with a fine point from Nathan Gavigan which set the tempo for the half. MacCumhaill’s were finding the space to get shots off but efforts from Aaron Kelly and Steven O’Reilly failed to hit the mark. Brendan Boyle got Ardara’s first score of the half from play but the game’s momentum was to shift to the visitors.

Darren O’Leary was brought down and a penalty awarded which he excellently dispatched. The next play in was a ball from Gary Wilson which rattled off the post and found that man O’Leary again who won possession and rifled home again despite the best efforts of Ardara ‘keeper Ciaran Gildea.

This was the first time that MacCumhaills had taken a lead in the game and from that they would go on to dominate proceedings. Lorcan O’Donnell put Ardara back to 1 point of the visiting team and moments later Michael McShane issued O’Leary with the black card. MacCumhaills would rattle off the next 3 points from Gary Wilson, Benny McLaughlin and a fine effort from Padhraic Patton.

Ardara would respond through Concarr but MacCumhaills could have had a third goal when Martin Gallagher’s fine run opened the home side’s defence and he opted to go for a goal but no joy. Aaron Kelly who was introduced for the second half got MacCumhaills final point of the game and Conor Classon took the deficit down to 3 points.

Ardara were offered a reprieve with the last kick of the game when a penalty was awarded for a foul. Concarr, who had been Ardara’s talisman on the day stepped up to take it but unfortunately for the home side it blazed over for a point.