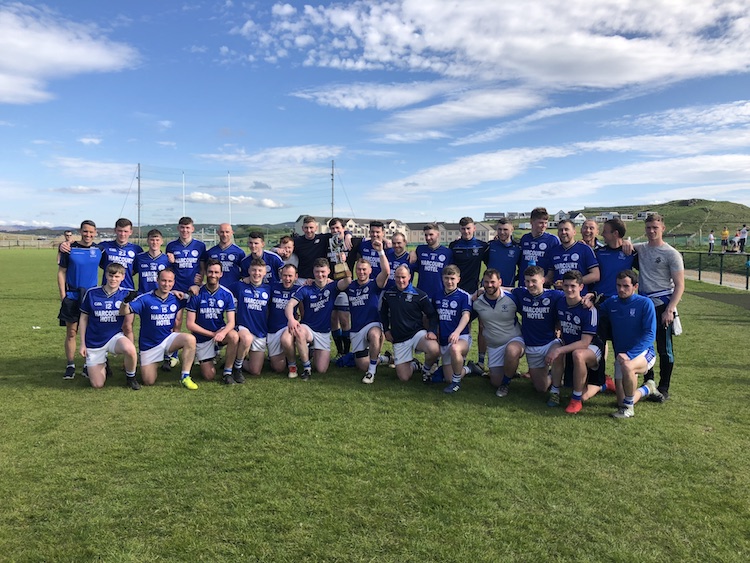 Naomh Conaill managed to keep hold of the Donegal Comortas Peile na Gaeltachta title – but not before being pushed to the pins of their collar by Naomh Columba in Downings.

By Chris McNulty in Downings

Dermot Molloy came up with the vital scores as Naomh Conaill retained their county title ahead of the All-Ireland finals, back in Downings, next month.

Molloy posted 1-5 as Naomh Conaill prised themselves through the gaps to edge out gallant Naomh Columba, who will reflect on this as one that got away.

First-half goals by Stephen Callaghan and Paddy Byrne, from a penalty, had Naomh Columba in front for a time, but Molloy’s goal during a purple patch had Naomh Conaill back in the driving seat again.

Naomh Conaill led by three at half-time, but Glen drew level six minutes into the second half.

Pauric Ward chased a cause that seemed a lost one. Ward managed to get on the end of a testing pass from Aaron Doherty and beat two Naomh Conaill defenders in the race.

Ryan Gillespie and Ward hit points as Naomh Columba edged in front again, but Molloy swung the pendulum with a fabulous long-range effort pulled from the top drawer.

With Naomh Conaill a point ahead, Martin Regan’s side were reduced to 14 men when Kevin McGettigan was given his marching orders for an apparent strike on Ciaran McBrearty, while Jeaic Mac Ceallabhuí was black carded five minutes from the end.

Naomh Conaill finished the game with 13 as Kieran Gallagher was dismissed for a foul on Callaghan in added time.

Division 2 Naomh Columba were more than a match for their Division 1 opponents and Pauric O’Neill’s point made for a grandstand finale.

Ryan Gillespie’s free had them within the minimum again, but the Pairc na nGael men were unable to claw back that final point.

Naomh Columba were bidding to win a first Donegal senior Gaeltachta title since 1997, but Paddy J McGinley’s team were down a number of bodies.

Donegal U20 player Lanty Molloy was unable to line out, while Kevin McNern, Barry Carr and Declan McGuire were among the others not on the first XV.

Glen got a dream start when, after some patient build-up play involving Pauric Ward and Christopher Byrne, Callaghan slotted into the bottom corner, just three minutes in.

Although Molloy and John O’Malley responded for Naomh Conaill, Naomh Columba were given a big chance of a second when Ryan McNern was fouled by Jason Campbell. Referee Liam McConigley had no hesitation in awarding a penalty and Byrne stepped for to fire beyond Stephen McGrath.

Naomh Columba lost their way somewhat, though, as Naomh Conaill hit 1-6 between the 15th and 25th minutes.

Molloy palmed home the goal as he got on the end of Jeaic Mac Ceallabhuí’s centre.

Naomh Conaill – minus Leo McLoone, Anthony Thompson and Ciaran Thompson ahead of Donegal’s Ulster SFC clash with Cavan this weekend – started to purr with Molloy arching over a point and Ultan Doherty’s searing pace taking him around the back for a score.

Former Donegal panellist Marty Boyle got in on the act and when Mac Ceallabhuí and Molloy hit two in a minute, it was beginning to look all rather ominous.

Aaron Doherty landed a majestic point off his left foot and Byrne slotted another to make it a three-point game at the break, where Naomh Conaill led 1-8 to 2-2.

Naomh Conaill scored just two points in the first 20 minutes of the second half, but it was to be Naomh Conaill’s day in the Downings sunshine.