Kildrum Tigers and Castlefin Celtic face off in league decider

The Brian McCormick Sports Premier League will come down to the wire this Sunday with the two top sides in the league facing off against each other.

A single point separates the sides with Kildrum in first position, a place they have held since nearly the start of the season. Castlefin though have been in brilliant form in the second part of the season, barely dropping any points at all.

Liam McLaughlin is penned down to be the man in the middle and it’s looking likely that he will have a tense and lively contest to referee.

Unbeaten Kildrum Tigers enter the tie knowing that a draw or victory would earn them the league title. Kildrum have yet to lose a game this season and will know that come the end of the weekend they could become earn themselves the tag of ‘invincibles’.

The home side enter the game with the best defence in the league, on the other hand their opponents have been the most potent attackers in the league this year.

Michael Lynch and Daniel Clarke have been able to return from America in the past few weeks and both will be hoping to retain the starting berth they earned against Cappry.

Kevin McHugh has led the line all season for the home side and will look to continue his scoring form at the weekend. The former Finn Harps man returned to Kildrum midway through last season and has given the side a massive boost with his experience and ability.

Kildrum manager Shane Brown was playing for the side the last time they won the league, he admitted that despite being in a brilliant position it isn’t completely ideal. “It could be a lot better, it could be finished,” said Brown in relation to winning the title.

On the other side of the tale in the final league game is Castlefin Celtic, the away side travel to station road on Sunday knowing nothing other than three points will suffice. 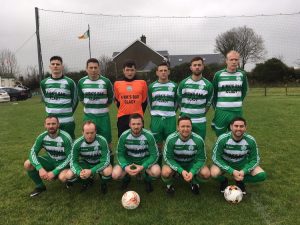 Castlefin have been the league’s most potent attackers this season scoring seventy-five goals so far this season. This scoring power could prove to be vital come Sunday as they will know that they will need to score at the weekend to have a chance of winning the title.

Matthew O’Rourke, Raymond Foy and the Tourish brothers are players that have plenty of experience at this level. Of their seventy-five goals over the season, twenty-two have come against Lagan Harps but their scoring ability cannot be questioned.

In recent weeks Castlefin have been in scintillating form driving forward the title drive. Fifty goals in their last ten games shows a healthy return and gives an idea of what style of football they play.

This hasn’t been the only impressive thing about them this year. The nineteen goals they have conceded is second to only Kildrum so the defenders are more than capable as well.

One thing for sure is that there will be a winner of the Brian McCormick Sports Premier league come Sunday. Kick off in this one is at 2 o’clock with large crowds expected to travel to Station road for the league finale.