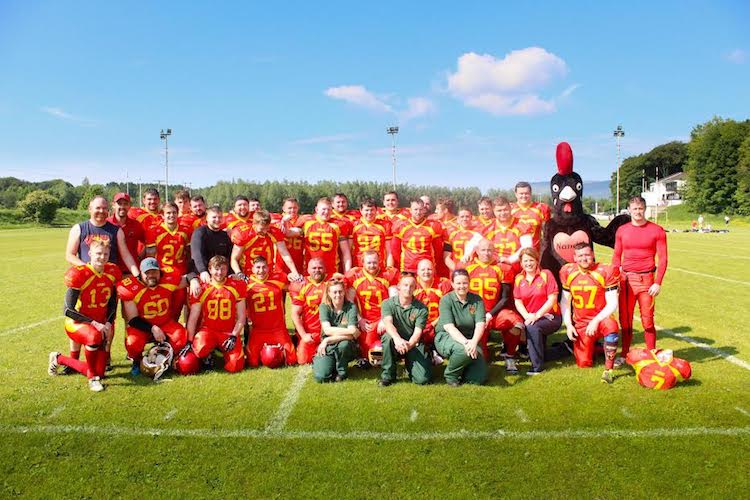 Donegal Derry Vipers made it three wins in a row and went to the top of the IAFL 1 North Conference.

The Cowboys (3-2) sitting top of the conference on points scored, visited the 2nd placed Vipers (3-1) and both knew a victory would put them in the driving seat as the playoffs beckoned.

The game, played in sweltering heat started well for The Vipers as their 1st drive resulted in an early lead. QB Daniel Mullen marched his men up the field using his running backs Kyle McAneny and Cathal Curran to good effect as The Vipers O-Line forged a path forward.

Some great hands by the TightEnd pairing of Ruairi Bradley and Derm Brown stretched the Cowboys secondary before the lightening quick Mullan swept to the outside and into the endzone for the first score of the game. Kicker Gary Melly chipped the PAT through the uprights to make it 7 – 0 to The Vipers.

Derm Brown fights for yardage after a catch

The 2nd quarter began and as The Vipers defence went streaming through the Cowboys offensive line Paul O Donnell and Peter Farell made crucial tackles as the Cowboys tried in vain to put a drive together.

Darren Quinn stepped up with the obligatory sacks and linebackers Paddy Maguire and Niall Lyons watched the edge to ensure the Cowboys attack was subdued.

The Cowboys were forced to go to the air. After a few quick turnovers of possession, including two of Ryan Brolly’s four interceptions, Daniel Mullan stepped up with one of his own and as he utilised that speed again took the ball to the house for a pick 6 to extend the lead to 13- 0 Vipers.

Whilst the field goal team lined up for the PAT a bit of trickery from holder Ryan Brolly and tight-end Ruairi Bradley saw them complete a 2 point conversion much to the surprise of everyone except kicker Melly who was quick to react and throw a crucial block to give Brolly time to complete the pass. Vipers 15 – 0 Cowboys. 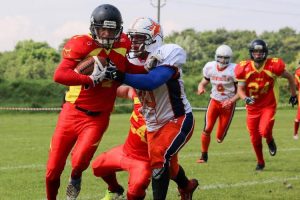 QB Mullen sets off for the Vipers

As the Vipers defence entered the field they continued to apply the pressure. Chris Tinney and Paddy McGlynn limited the Cowboys outside running game to single yards rather than 1st downs and once more Brolly, in at Corner, picked off the Cowboys for his yjirf Interception of the game.  The Vipers offence took to the field and with a 15 point lead decided to finish the half on the ground. McAneny and Curran worked in unison eating up chunks of field as The Vipers surged again.

TE Brown, on the sweep, clubbed his way downfield with some tough runs before his counterpart Bradley popped up in the back of the end zone in acres of space for another TD. With Melly tacking on the PAT the half ended with The Red & Gold leading 22 – 0.

Vipers coach Pauric Rose made sure his men were focused at half time. He was proud of his men but his call for more was not debatable. McAneny was heard recounting their defeat to The Cowboys in Letterkenny in 2017 and The Vipers knew there was more football to come.

The Vipers O-Line, led by Barry o’Kane, once more forged the way forward. Leon Brown and Mark O’Donnell split open the left side to allow huge gains for The Vipers running back core.

Whilst Gareth Gordon and Shaun McGrory dominated the right, helping gain those tough yards. As The Vipers reached the red zone it was the Ballymena man Gordon in tandem with o’Kane and McGrory who punched a huge hole in the Cowboys defence that allowed McAneny to stroll through for a well deserved TD. Once more Melly tacked on the PAT to put The Vipers up by 29 – 0 as the 3rd quarter drew to a close. 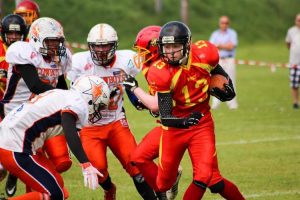 Ryan Brolly takes off after an interception

The 4th quarter played out almost at 80 per cent speed as the sweltering conditions continued. The quarter saw a few changes in possession including Brolly’s 4th interception, some outstanding running by RB Michael McCay and some ferocious hits by The Vipers defence.

The game slowly ticked away from The Cowboys. It wasn’t until 6mins from the end that they got their 1st score but a TD for The Craigavon men will be of little consolation after such a convincing defeat at the hands of their biggest conference rivals.

Next up The Vipers travel to Meath to take on the Bulldogs on 17th June. They go there as conference leaders and looking to extend their winning streak to 4 on the bounce.