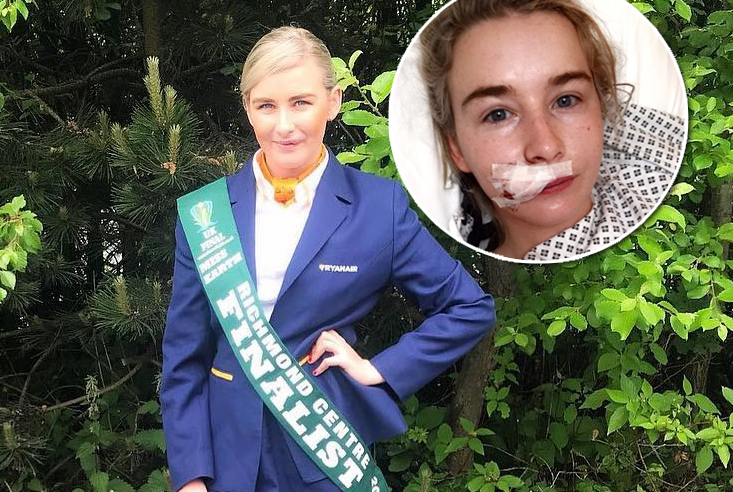 Twenty-one-year old model Kayleigh Hone has bravely battled through a difficult few weeks for one of her proudest career moments.

The Donegal Town woman suffered a horrific reaction to a spider bite two weeks ago during her training for the Ryanair cabin crew.

Kayleigh was training in Germany when she was bitten by an unknown species of spider. The bite caused her lip to swell painfully when she returned to Dublin for her exams, but she was determined to not let it stop her qualifying as a flight attendant.

Kayleigh stayed strong through her wings ceremony at Ryanair’s Dublin Office on Tuesday and rushed to hospital for surgery straight afterwards. Doctors made a cut on her upper lip to drain an abscess from the bite. Two days on, and Kayleigh said she is feeling much better. 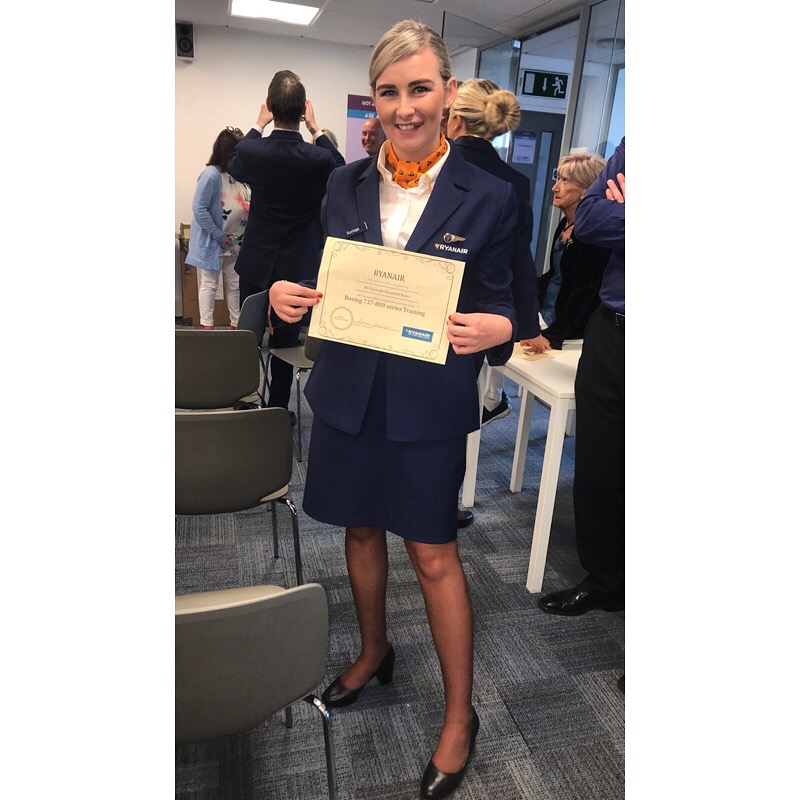 Kayleigh Hone gets her wings on Tuesday

Speaking to Donegal Woman, Kayleigh said she is still not sure what happened: “I was training in Germany 2 weeks ago and the day I came home I notice I had a spot beside my lip which was extremely painful within a few hours it had swelled up massively.

“After my exam I rushed myself to hospital. They gave me antibiotics and strong painkillers and said to come in again if there’s no improvement.

“I decided to wait to see if it got any better and let the antibiotics have time to work but it seemed to get worse so I went back into hospital and they put me on an antibiotic drip.” 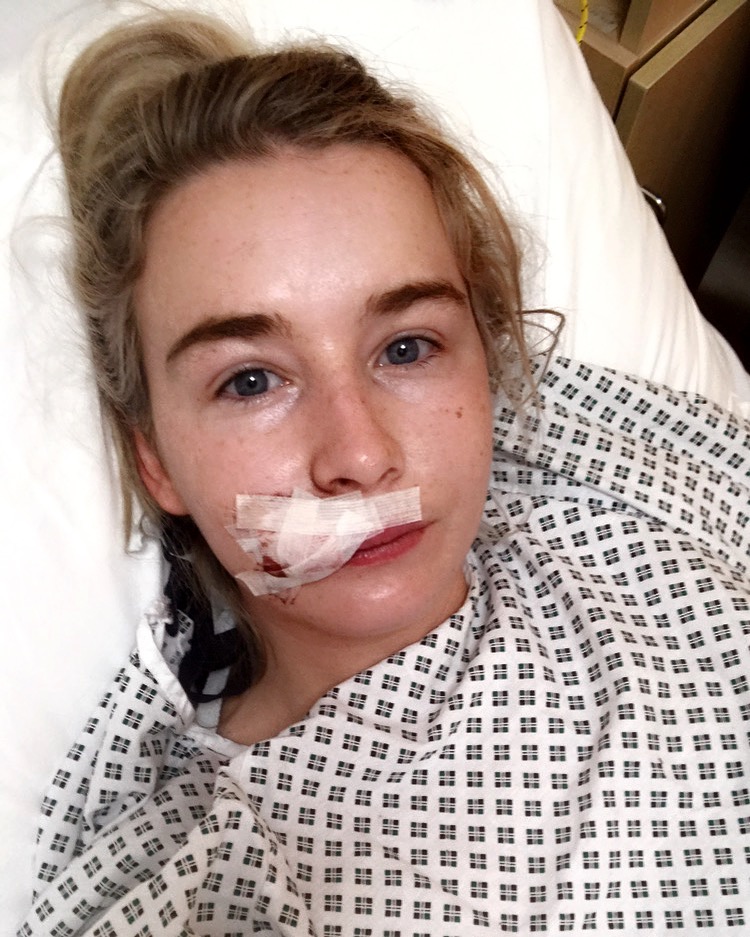 Kayleigh after her surgery

Kayleigh had been training with Ryanair for seven weeks to fulfil her dream of joining the airline. She is also a keen beauty pageant participant, having competed for the Miss Donegal and Miss Universe Ireland titles.

This summer, Kayleigh will be a finalist in Miss Earth Northern Ireland 2018, the environmental-themed pageant.

Coping with a painful bite in the lead up to the contest has left her feeling insecure, she said.

When I found out this it broke my heart the only things I could think about was “how will I hide a scar on my face?”

“I am meant to be doing The Richmond Centre Miss Earth Northern Ireland, what are people going to think if they see me with a scar? And modeling ? That’s something I love doing, will I have to stop it? Is the scar going to be massive?”

Kayleigh said she has learned to accept her flaws and be grateful for her blessings.

“At the same time there’s worse out there than a scar on my face. I am very lucky that this was just a scar,” she said.

She is also grateful for the support of her fellow cabin crew trainees. Attending the Wings ceremony was an important milestone for Kayleigh to finish the course with her new friends.

“It was a very intense course for everyone involved I had to be there not just for me but for my fellow Ryanair family. I’m lucky at how good and supportive they have been throughout all of this. I’m lucky to have such amazing friends from this course,” she said. 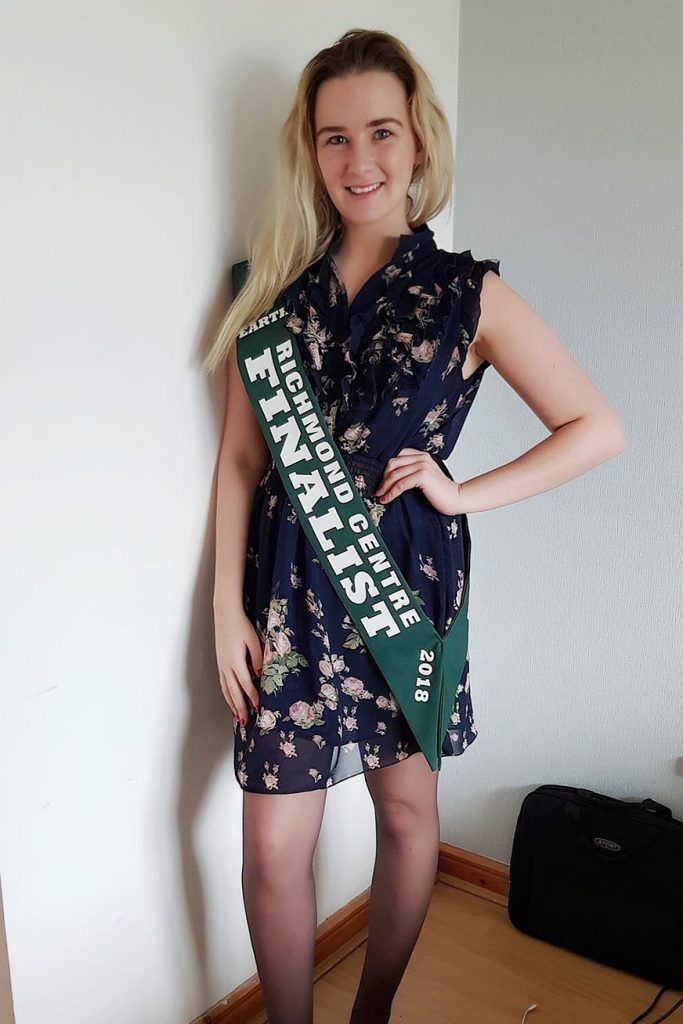 Kayleigh is a finalist in Miss Earth Northern Ireland 2018

Participating in Miss Earth NI 2018 was a competition of personal importance to Kayleigh, who has a passion for nature and animals. She was also proud to join Ryanair for its commitment to being Europe’s ‘greenest airline’.

She said: “I have always had an interest in the environment and ways to help make our world a cleaner place. I took up pageants two years ago to try help me overcome my anxiety and depression and it has helped me so much with each pageant I do I feel more confident in myself.

“From growing up around a farm, I’ve always had an interest in farming and would help my grandfather as much as I could. Being in the nature and with animals seemed to be an escape for me.

“I am a massive animal lover ( have 4 dogs) and regularly volunteer for my local animal charity Animals In Need Donegal.” 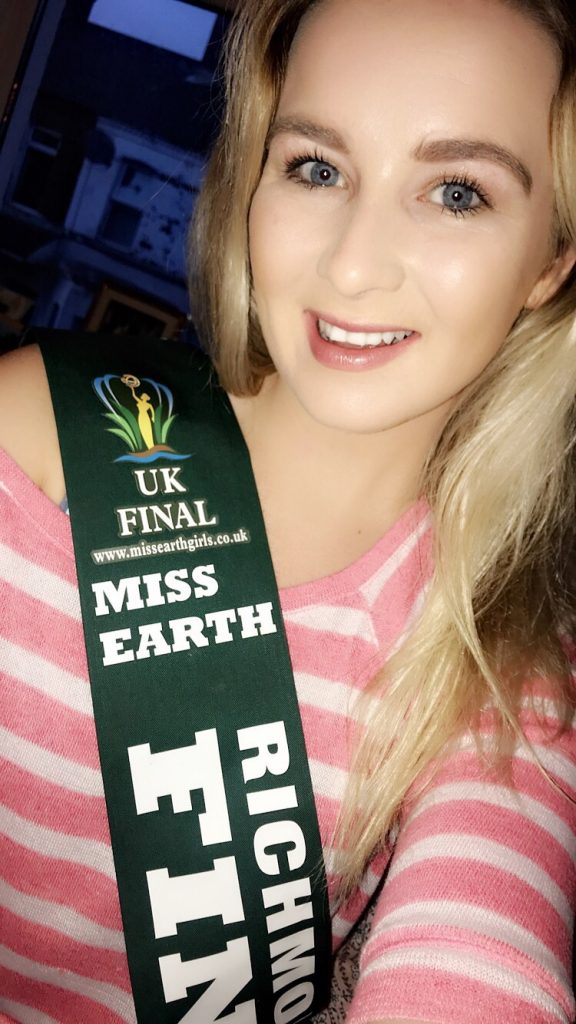 Kayleigh is a finalist in Miss Earth Northern Ireland 2018

Kayleigh has chosen Organic Farming as her advocacy in the competition and will focus on changes to improve farming as part of her campaign. She will be championing her views in the Miss Earth Northern Ireland final in Derry on July 28th in the hope of winning the chance to travel to the world final.

“This is a topic I feel is very important to my heart as it’s an issue my grandfather keeps close to his so that makes it extra special for me. I hope to make him proud on the 28th of July.”