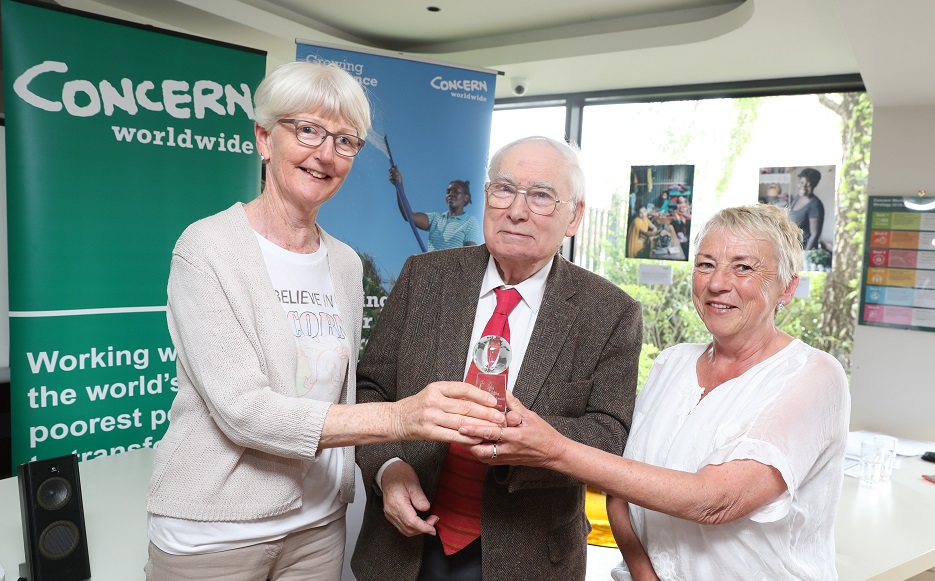 A million thanks to Twin Towns volunteers on incredible fundraising efforts

A Donegal fundraising group who collected over €1 million for Concern Worldwide since 1984 were praised for their incredible efforts at a recent award ceremony.

Ann Glancy and Ita Ward from Ballybofey and Stranorlar collected the Outstanding Commitment Award on behalf of the Twin Towns Concern Action Group and members of their local community at the 2018 Concern Volunteer Awards.

The group – which has about 18 members and up to 100 volunteers – was thanked for its efforts by Concern Chief Executive, Dominic MacSorley, at the ceremony held at Concern’s global headquarters on Camden Street, Dublin.

“Over €1 million has been forwarded to Concern as a result of their efforts since they formed in 1984,” he said.

“Each year they run a series of events from the ‘Monster Christmas Bazaar’ to a spring sale and these events are not just good fundraisers, but major social events in the locality.

“The group started after Beth Jackson, a local nurse, went as a Concern volunteer to Ethiopia during the 1984 famine and friends and family back in Ballybofey/Stranorlar rallied to help by raising funds for Concern.”

Ann Glancy said Beth is one of about five people from the local area who volunteered and worked overseas for Concern and that the organisation’s influential leader and former CEO, Fr Aengus Finucane, who passed away in 2009, used to visit the area and do local media interviews to promote Concern’s work.

“Without all the people in the towns, that money would not have been raised and we thank them for all they have done,” she said.

“This is a big community effort facilitated by the group with new generations of people also taking part.”

Concern’s Volunteer Awards was created five years ago to celebrate the vital contribution made by the aid agency’s volunteers in Ireland – which helps fund the organisation’s overseas work that last year alone saw 27 million of the world’s poorest people reached in 27 countries.

Concern was formed by volunteers 50 years ago in 1968 as part of a major humanitarian response to the Biafran famine in Nigeria caused by civil war – a milestone that is being marked this year by the organisation at a number of events around the country.

A million thanks to Twin Towns volunteers on incredible fundraising efforts was last modified: June 14th, 2018 by Rachel McLaughlin