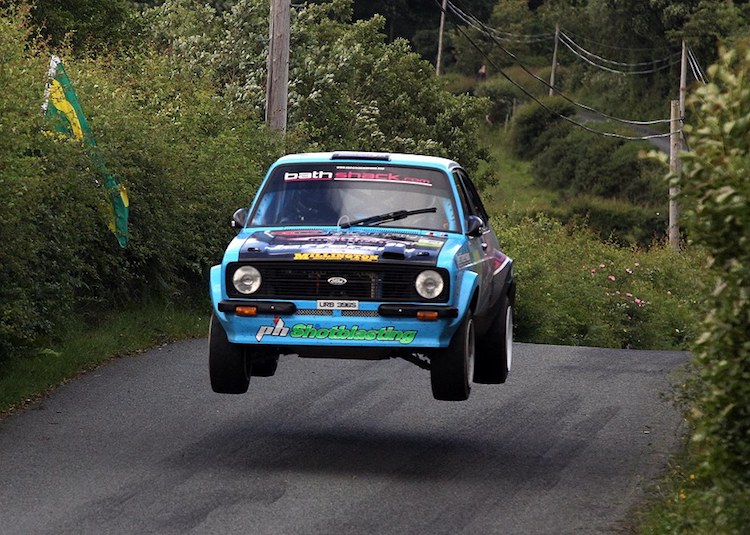 Three of Donegal’s most iconic and famous stages – Fanad Head, Atlantic Drive and High Glen – will bring to a close the 2018 Joule Donegal International Rally.

Just after noon, the first of the crews will head for Fanad Head before moving onto Atlantic Drive and then into High Glen.

Picture: Frank Kelly takes to the air on Gartan. Picture by Brian McDaid

After service at Milford Mart, the competitors will go for a second loop of those three stages, the event coming to a close at Coole Chapel at the end of High Glen.

The Fanad Head stage is one of Donegal’s legendary stages and takes the same format as last year. Rain has played a big role in Fanad over the last few years. Before last year, the previous time the stage was run in this direction was back in 2011.

Fanad takes on various different aspects of rallying. A tricky section at Doaghbeg comes before the flowing corners coming from Fanad Lighthouse. A hairpin right takes the crews down towards Magheradrummen and back over a super fast section that roars past Triagh-A-Locha, the home pitch of Fanad United.

After sweeping right past Rainbow, cars speed towards Ballyherrin Bay on the right. Hopes of time to be made up comes heading pass the Tin House and then it’s onto the flying finish at Cashel Post Office.

Last year, Kelly and Barrett were fastest on this stage with a time of 9:42.

One of the world’s most famous stages in rallying, Atlantic Drive stands the test of any rally anywhere. There are few better anywhere in the world.

The stage starts at the Church and the iconic stages has so many moments and even more memories over the years.

The Drive is tight and technical for everyone with bravery key here.

The most famous location is McClafferty’s Shed. As per the last few years, the crews come at it from the opposite side that was made famous by Paul Harris – now on Manus Kelly’s backroom team – in the Sunbeam.

Down towards Clontallagh, the crews fly for the Singing Pub at full tilt, then down towards the finish at Mevagh.

Many view this as Donegal’s best stage. This year’s version is the same as the 2017 run, starting on the Derrylaggy side. Glen is a competitor’s favourite, with its fast-flowing nature at the start. The crews come into Glen village and uphill towards High Glen.

The uphill decent is fast and on a good day the seeds are high on top of Glen.

The downhill finish to Coole Chapel can catch those out who already have an eye on the finish.