DD Motoring: The Mitsubishi Outlander – the perfect all rounder

There’s always someone to tell you what a car might not have or what it’s doing wrong but the Mitsubishi Outlander will silence the best of the critics in its quiet unassuming way.

I once turned down buying a car because it hadn’t lumbar adjustment in the driver seat. When I did finally find the same model and make with that sought after back adjustment I bought it right away.

I’d say I adjusted the lumbar support twice and haven’t moved it since. The point about this useless piece of information is that we throw all these equations into the mix every time we go to change the family car. We see stuff that we convince ourselves that we must have in the future.

The sun is splitting the rocks in Donegal these last few weeks. It’s hotter in Portnoo than it is in Portugal, yet just over two months ago more snow fell in a short period of time in Arklow than did in Alaska!

The weather is changing in Ireland with rain, snow and heat measurements all being rewritten. So this week we take a look at the very elegant and civilised looking SUV with some serious off-road abilities.

This week we were in DMG Motors in Donegal Town to have a spin in the Mitsubishi Outlander. 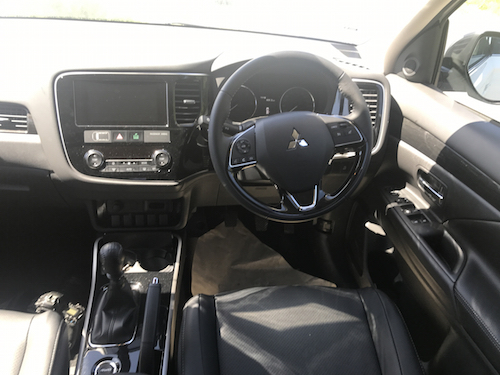 I am interested in all these versions and know that there’s one for everyone in the audience with this range but this week it the diesel 2.2 all-wheel drive passenger version is the one that I am interested in.

Traction is the buzz-word in a different digital world now. It’s what and where and when you need to position your post or tweet to get the best traction or grip of other users attention on line.

Mitsubishi is a masters of the original traction in their bigger work-horses the Pajero and the L200,

This all wheel drive 2.2 diesel Mitsubishi Outlander has an elegant estate like look to it but when you look a bit closer you notice things like its ground clearance of eight and a half inches which is a lot more than any of its competitors in this class. Small things like the thickness of the bottom of the sills with a protective covers show this car was designed to go off-road.

The engine has 150 brake horse power on tap which can be driven in economy mode. At the switch of a button beside the gear stick to Eco drive which could take the SUV down to two-wheel drive. In Auto mode it leaves it up to the car to decide which is the best place to send the grip to any or all of the four wheels. Then there’s diff lock which tightens up the traction on all four wheels which is an option that is not always available for it competitors in this section.

Very few SUVs will be off-road in their life-time maybe when they put a wheel over the Kerb when they are backing out of the driveway and end up in the garden. But if you look at the weather we have experienced this year alone. The sure-footed Outlander might be the difference in getting you home safely. 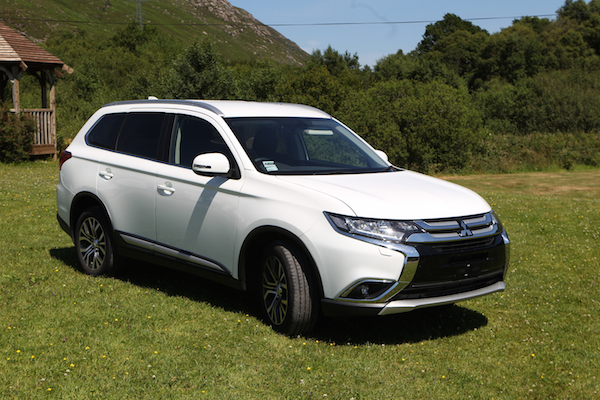 Ticking all the boxes

There are very few SUVs in this size level that offers so much and such a variety of seating arrangements as this Outlander does. This 2.2 diesel version comes with a third row of seats in the boot which make it a seven-seater in the model that we drove which works out perfect for that extra passenger or two or even three!

These seats fold down into the boot as does next row of seats which give a near flat load space and because it in estate form it’s going to be longer load area than most SUV’s if you add to this that the Outlander is one of the “World Cars” so it safety rating has to meet every country safety standards that it’s sold in so its safety rating is going to be higher than that of its competitors.

Prices from the Outlander Intense start with the 2.2 diesel five seater two-wheel drive version at approx €32,500 to approx €39,900 for the seven-seater al- wheel drive Outlander Instyle like the model we drove. There is also an automatic and a hybrid version.

The two-wheel drive, according to Mitsubishi can do up to 57mpg in ideal conditions. 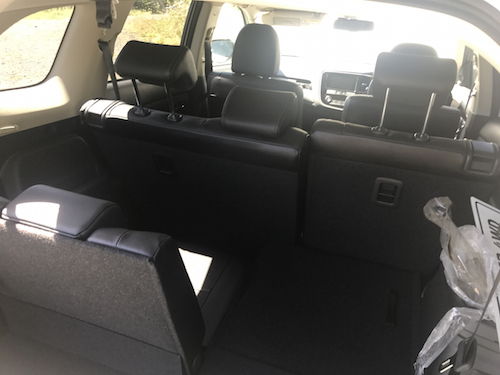 With three rows of seats in the Outlander this Mitsubishi offers great possibilities for its passengers. Photo Brian McDaid

I don’t know if this is the first car-maker to consider drivers that have rooted about for keys before they went anywhere in a car and with these new keyless Operation System you end up rooting about for the keys when you go to get out of the car as well. The Mitsubishi Outlander now has a slot in the middle of the dash to put the key into and leave it there until you need it when you’re getting out of the car. This is more for the comfort of the driver who was used with the key in the ignition for years. Its just one of the many things that Mitsubishi have thought about in this very well appointed car in a very straight forward laid out dash which is easy and clear to operate for the driver. 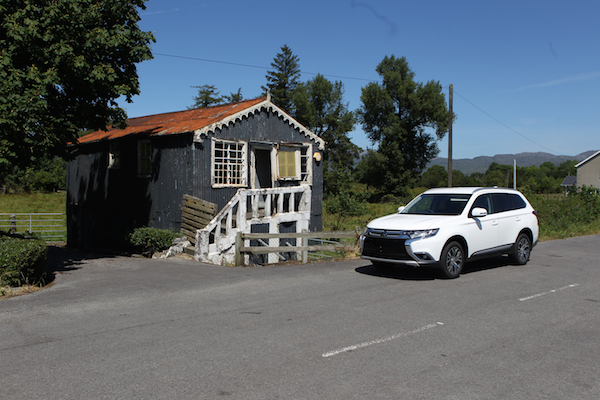