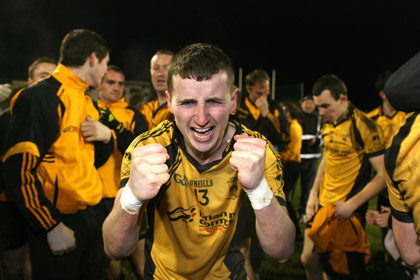 A super point from 40 meters by Conor Gibbons ( pictured above )  in the 4th minute of added time, his 10th of the match,  earned St. Eunans a point in this keenly contested All County Division One clash at O’Donnell Park.

The teams were level at the break after a low scoring first-half , the scoring ratio kept low by a number of wides by both teams and a penalty driven wide by the home team’s Niall Hannigan in the 27th minute.
Conor Gibbons free  and Conor ‘Duck’ O Donnell’s 45 had Eunans two points ahead in the 7th minute. It took Gweedore until the 11th minute to raise a flag and it was an excellent score. Kevin Cassidy quickly delivered a side-line ball to Gavin Mc Bride inside, he fetched it and unloaded to Eamonn Collum who drilled it low to the net. Cassidy pointed in the 16th minute but Gibbons quickly replied from play and Mc Bride made it a two point game from a free  in the 19th minute.

Three minutes later Gweedore should have had a second goal when Cassidy intercepted an attempted pass , transferred to James Carroll but with the goal at his mercy he blasted wide.
Conor O Donnell finished off a good Eunans move with a fine point to leave the minimum between them and the home side got a great chance to lead at the break when Brillant play by Conor Parke sent Aaron Deeney in on goal and when he was taken down a penalty was awarded but Niall Hannigan dragged his shot wide. On the stroke of half-time Gibbons converted another free to leave it 0-05 to 1-02  at half-time.
Charlie Collins reports from O’Donnell Park.