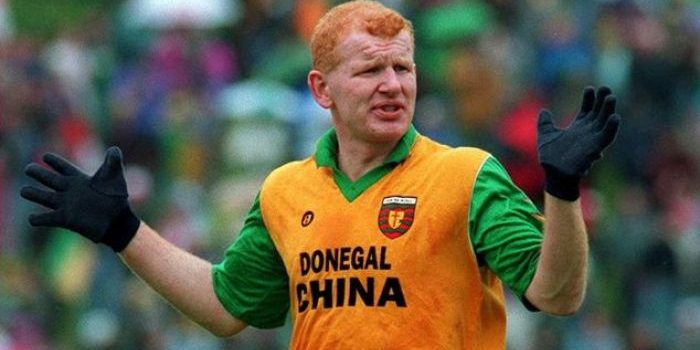 Declan Bonner knows what it’s like to have 50,000 Dubs chanting your name.

The Donegal manager can vividly recall the National League semi-final of 1993. Donegal were on their way to beating Clare when Bonner got injured and was being carted off.

Picture: Declan Bonner during his playing days with Donegal.

Just seven months previously, Bonner arched over Donegal’s last point in their 0-18 to 0-14 win over the Dubs in the 1992 All-Ireland final. Bonner’s clenched fist salute to the Hogan Stand remains an iconic image.

Bonner’s was a serious injury and the Lettermacaward man would spend a few weeks in hospital.

But the baying hoards of Hill 16 weren’t to either know or care as Bonner left the action. Dublin were playing Kerry in the second semi-final and they threw their venom to the flame-haired Donegal forward.

“Of course, Bonner later said that at least the Dubs knew his name – they weren’t singing at anyone else!” Tony Boyle later recalled.

Meetings between the two have always been spiky affairs.

On the first Sunday in May 1993, Donegal and Dublin met in that National League final.

In a 0-9 apiece draw at Croke Park, John Joe Doherty marked Charlie Redmond and it was a day that Doherty believes won him an All-Star. Redmond’s frustration culminated when he was sent off. A minute later, Keith Barr walked, too, and Dublin finished with 13 men.

Referee Brian White played just one minute of added time and the would lock horns again in a replay.

There were only five minutes gone in the second instalment when Tommy Carr drew a boot off Brian Murray and White was left with little option but to send him off. Dublin took the spoils 0-10 to 0-6 in the replay.

A year earlier, Donegal and Dublin met at Breffni Park in a quarter-final.

Few would anticipate their meeting just five months later on the biggest stage of all.

But the needle was there and the mercury had been quick to rise.

Joyce McMullan’s goal had Donegal 1-6 to 1-3 ahead at half-time. Donegal were able to hold onto their six-point lead, but they were unable to score in the last 18 minutes. With ten to play, the margin was down to four.

Paddy Cullen, the Dublin manager, withdrew Mick Galvin and Paul Nugent, but their replacements, Vinny Murphy and Paul Clarke, scored late goals to sink Donegal. Redmond, who netted in the first half, threw a shot across Noel Hegarty’s brow: ‘It’s never over until the Fat Lady sings’.

That September, with Donegal five points ahead and Redmond having had a shot charged down, Hegarty got his riposte. The Glen man remembered Breffni and Redmond couldn’t reply. 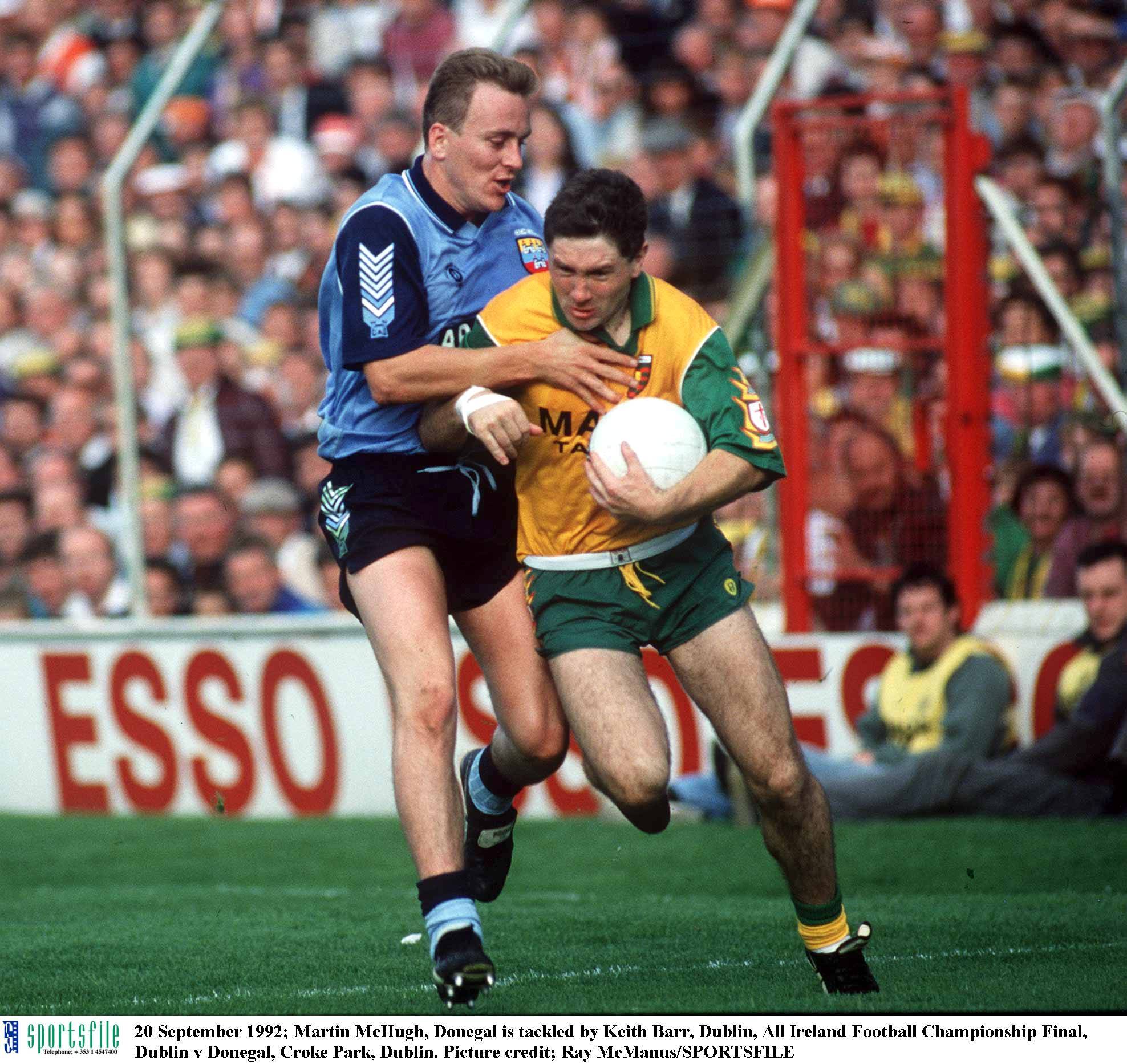 Martin McHugh, Donegal is tackled by Keith Barr, Dublin, during the 1992 All-Ireland final

Bonner, who led the 2014 Donegal minors to a win over Dublin in the 2014 All-Ireland semi-final, is back in the big house this week as Donegal and Dublin meet on the first night of the All-Ireland quarter-final group stage.

Frank McGlynn has tasted the good and the bad at Croke Park against Dublin.

“The preparation is laid out in the weeks beforehand. We try to carry out those plans, no matter who the opponent is. Playing Dublin in their current guise and with the team they have is always going to be difficult. It’s something to behold and something to look forward to. 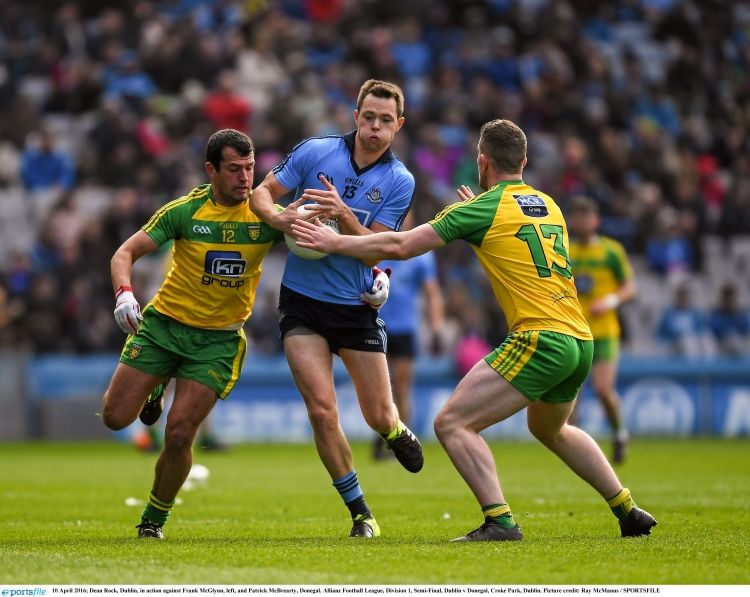 “As a player, you want to play in Croke Park. If we had a choice we’d probably take it somewhere else to play Dublin. That’s for the rule makers to decide. Our schedule was laid out the Monday after the Ulster final and we knew we’d be playing Dublin in Croke Park this weekend. That’s what we’ve geared towards and planned for.

“I suppose we had success and a couple of defeats in the past couple of years, and heavy defeats in Croke Park. We’ve been in both spectrums and both ends, and it’s something that the older lads have experience of. You be trying to pass that onto the younger lads, and the great thing about having no experience is you know no different. Some of them younger lads are going to go in with that energy and that pace and let loose and see where it brings them.”

The deafening crescendo of noise will fill the D9 skyline on Saturday evening as Dublin – chasing a fourth Sam Maguire in a row – look to pass what should be their first true test of the summer.

Bonner is well aware of what he’s about to meet.

“They’re actually one of the top teams that ever played Gaelic football,” the Donegal manager said.

“Dublin have 40 players that would get their place on most inter-county teams. That’s the strength of their squad.

“Dublin have set the bench and it’s at a very high level now. The guys that come off the bench; they actually normally finish stronger in the last quarter and they have a lot of experience coming off the bench. They are formidable opposition, they haven’t won the last three All-Irelands by being an average team.”

The Croke Park factor can be a factor – and is something Donegal have been painfully pointing out over the last week.

Barry McGowan recalled running out from beneath the Hogan Stand to take on the Dubs.

“It was like the noise from a pneumatic drill,” he later recalled. For the ’92 All-Ireland final, the noise was such that McGowan had the urge to just cover his ears with his hands.

“I couldn’t do that because you’d look stupid to do that on an All-Ireland final day,” he reckoned.

Hegarty noted how his legs went weak and Donegal captain Anthony Molloy took the step of opting to play into Hill 16 in the first half – an attempt to not enable Dublin get control of the game.

This week, Donegal will need to flex their fearless streak – but for 70 minutes.

“Everyone is looking forward to getting a big game there.

“A lot of the young fellas are at the age where there is no fear in them anyway – whoever they come up against.

“We are treating every game like a knockout and we have to go down and put in a performance. All of us are looking forward to it.”

Bonner has long been an admirer of the Dubs. He often sought them out for challenge games during his time looking after Donegal’s underage teams.

He almost looked insulted when someone asked at a press conference this week if it was a case of Donegal playing for second spot in their group.

“We’re not going for a look around Croke Park or to admire what we’re up against,” he responded.

“We want a performance that will get us a result. It’s a very difficult group we’re in. It won’t be easy but, ultimately, we want to be in the top two to get into an All-Ireland semi-final. That’s our next goal. The job starts on Saturday night against Dublin.”