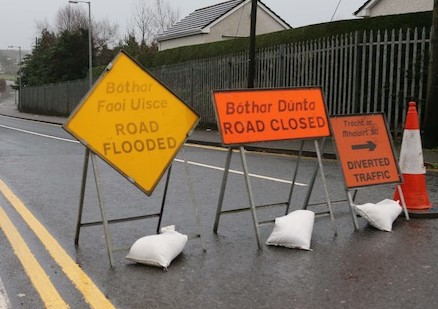 It’s time to get ahead to prevent flooding risks, Letterkenny council told

Letterkenny MD Councillor Adrian Glackin has called for pro-active measures to the taken in preparation for potential heavy rain at the end of the summer.

Donegal was hit with devastating flooding following torrential downpours in August 2017. In a bid to reduce risks of severe flooding again, the local authority has been asked to clear water tables in low lying areas, gullies and areas susceptible to flooding.

Cllr Glackin said: “We’ve been hit with deluges of rain in late summer in recent years. We have good engineers in the road departments who could put their heads together and target places that are susceptible to flooding to get the water tables and gullies cleared. I think prevention is better than cure. If the worst happens then we are ahead of the game.”

Cllr Gerry McMonagle added: “Particularly now with this really long dry spell there are so many dead leaves, soil and grass blocking outlets. Last August we’ve seen the outcome of not having clear sheughs and rivers cleared.”

The local authority said clearing water tables and installing drainage improvements are an integral part of road improvements throughout the year and the council will continue with the practices.

It’s time to get ahead to prevent flooding risks, Letterkenny council told was last modified: July 11th, 2018 by Rachel McLaughlin