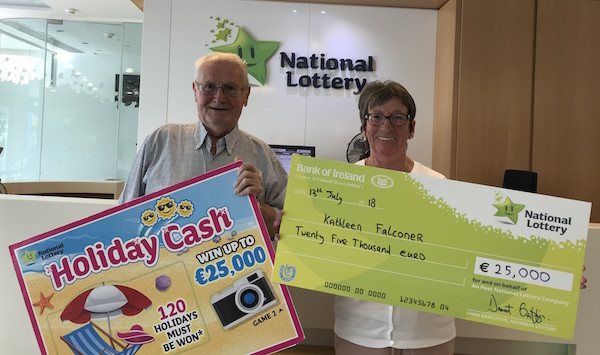 A retired couple who bought their lucky lotto ticket in Co Donegal are celebrating a real slice of luck – on the double!

The couple from Strabane won a cool €25,000 on a National Lottery scratch card just 12 years after they won a holiday to New York City as part of the National Lottery TV gameshow, Winning Streak.

Friday the 13th is often considered an unlucky day, but this certainly isn’t true for Kathleen Falconer from the town of Strabane in Co. Tyrone, who got her second slice of National Lottery luck having won the €25,000 top prize on a Holiday Cash scratch card.

Sitting in the National Lottery’s Winner’s Room, Kathleen Falconer revealed that she and her loving husband Liam, who also accompanied her to Lottery HQ with other members of their family, were one of the lucky few to win a trip to the Big Apple back in 2008 on Winning Streak scratch cards.

On this trip they were joined by legendary Winning Streak presenter, Marty Whelan.

Kathleen said: “The first time we learned we had won the New York trip twelve years ago I was gobsmacked. It was an amazing holiday – the type that is once in a lifetime and Marty was lovely and we all had a blast. I could never have predicted that a few years later I would have won €25,000 on another scratch card!”

She bought her ticket in Mac’s Books & Newsagents on Upper Main Street in the nearby town of Buncrana, a place the couple frequent.

Kathleen won her first holiday after sending in the stubs off her National Lottery’s Winning Streak scratch cards and was drawn to go on a luxury holiday along with a number of other lucky players.

Kathleen hasn’t ruled out returning soon for another prize. She continued: “Hopefully this won’t be the last time we will be in here as I’m off to buy my Lotto ticket for this weekend’s draw! Who knows I might meet Marty again and be on the Winning Streak TV show soon?”