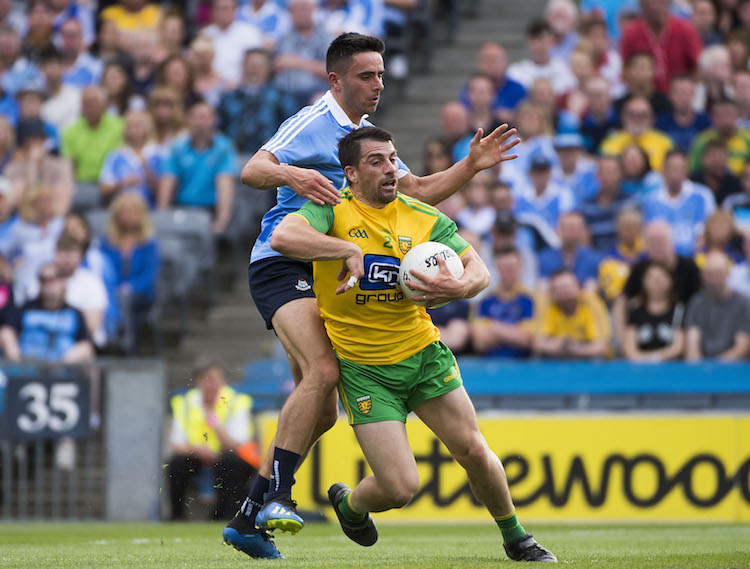 Donegal corner-back Paddy McGrath is set to win his race to be fit for Saturday’s game against Roscommon in Hyde Park.

McGrath had to be withdrawn at half-time in last weekend’s defeat to Dublin at Croke Park.

The Ardara man shipped a heavy challenge from Niall Scully – Dublin’s double goalscorer – as he raced in towards the Hill 16 goal.

McGrath was replaced by Neil McGee at half-time, sparking fears that he may have been a doubt for the trip to Roscommon.

Donegal were at McHugh’s Recovery Room in Letterkenny on Monday evening for a recovery session and were back on the pitch last night to train. It is now expected that McGrath will be able to take his place against the Rossies.

Otherwise, Declan Bonner has no fresh injury concerns, other than what he calls ‘a few bumps and bruises’ as Donegal head for what is a must-win game.

Meanwhile, Bonner has questioned the decision not to award McGrath a free for that incident late in the first half.

Referee Conor Lane signalled advantage when McGrath was taken down, but Dublin averted the danger when the shot was blocked down.

“It was a clear-cut foul,” Bonner said.

“What advantage were we going to get? The shot was blocked and the goal chance was gone. “There’s meant to be a five-second rule there for an advantage…absolutely, we should have had at least a free.”

Bonner, though, was quick to point that his own rearguard must tighten up as they ready themselves for a Roscommon side bleeding from an 18-point hammering by Tyrone last Saturday.

He said: “We conceded two bad goals and at this level you can’t give up chances like that.”