Two families were united in grief today as the first victim of the Malin Head drowning disaster off the Inishowen coast was laid to rest.

Gerry ‘Malin’ Doherty was one of two people who drowned when their 16ft fishing boat capsized off Malin Head on Tuesday afternoon.

Both 68-year-old Mr Doherty and his young nephew, 16-year-old Thomas Weir perished in the tragedy.

A third man, also a relative of the two victims, Dessie Keenan managed to survive when he clung on to a fishing buoy or almost four hours.

The stunning weather of recent weeks gave way to a damp mist and light rain which hung over the nearby stunning Five Finger Strand.

Among those present for the funeral were family and friends of tragic teenager Thomas who will be laid to rest in the coming days in Scotland.

Thomas had been staying in Derry in recent months with Mr Keenan. 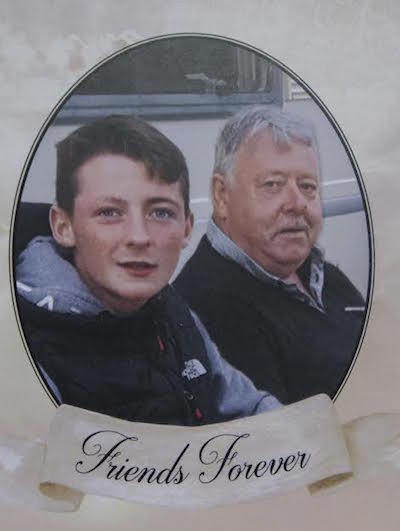 An ‘Order of Service’ pamphlet was handed out to mourners which had a picture of the late Mr Doherty smiling.

Fr Logue said that while hosting the recent Irish Open Golf tournament, Inishowen was described as ‘heaven on earth’ by some television commentators.

He added that while Inishowen was stunning, heaven is not on earth but that Gerry would soon be in heaven.

He said that although he moved to Carndonagh at a young age and then in later years to Burt, Gerry will always be of Malin and it was fitting that he came back to be buried here.

He remarked how his late father Patsy also drowned not far from where Gerry died almost 40 years ago on July 22nd next.

He revealed how he had spent time on the shoreline praying for the return of the missing men before the tragic news came through.

He also added that there was some consolation that one had been saved and that the bodies of Gerry and Thomas had been found and not lost to the sea.

He said the thoughts and prayers of the people of Donegal were with Thomas Weir and his family.

He also paid tribute to all the sections of the emergency services and the fishermen of the area who had help in the operation on the tragic day.

As well as the bread and wine, a framed picture of Gerry and his wife Marian on their wedding day were brought to the altar as gifts.

As well as a reflection, Gerry’s brother-in-law John Gleeson paid a short tribute to the late Mr Doherty.

He recalled how Gerry’s wife Marian often said to her husband how she would love to win the lotto.

But Gerry always replied that having her, their children and their grandchildren, he had already won the lottery.

“That’s how Gerry was, he always had a smile and a good word for everyone,” said Mr Gleeson.

The late Mr Doherty was then led to his final resting place in the adjoining cemetery.