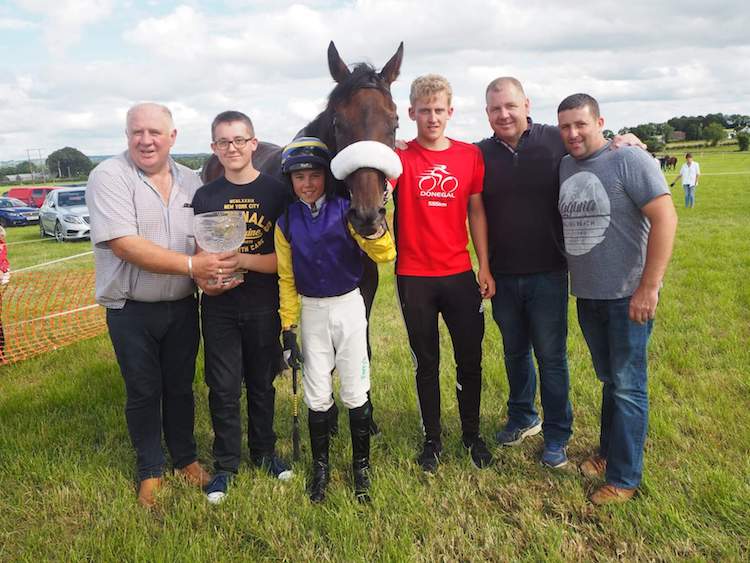 Another four-timer for Dylan Browne McMonagle in Garvagh

Dylan Browne McMonagle is riding with supreme confidence at the moment as he rattled up another four timer in Garvagh at the weekend.

With the North West jockey’s title firmly in the bag the teenager has his eyes now focussed on the National All Ireland title.

Dylan Browne McMonagle after winning the feature race on the day, the Eugene O’Kane Derby, onboard Let It Go

He was soon on the mark aboard the prolific Five Stone Of Lead in the 148cm race and his double came aboard Skys The Limit in the 153cm but the Letterkenny man had to work over time to get the latter home in a three way battle to the line.

The treble was completed when Let It Go put up his best performance to date winning by a wide margin in the 12 furlong open the feature race of the day.

Aideens Dream made it another red letter day for the champion rider when making all to score in the 1mile open and giving him his fourth victory of the day.

Christys Darling took the opener for Nina Simpson who led from flag fall and stayed on strongly to score in grand style.

It was a day to remember for both Luke Turner and Darragh McGill as they got there first ever wins.

Luke, a son of top Donegal country singer Ryan Turner, took the 10 furlong open aboard Remix while Darragh had a sweet win in the concluding Race aboard Movina’s Boy.

Racing this coming Sunday 29th is at the Big Isle Manorcunningham starting at 2.30pm.