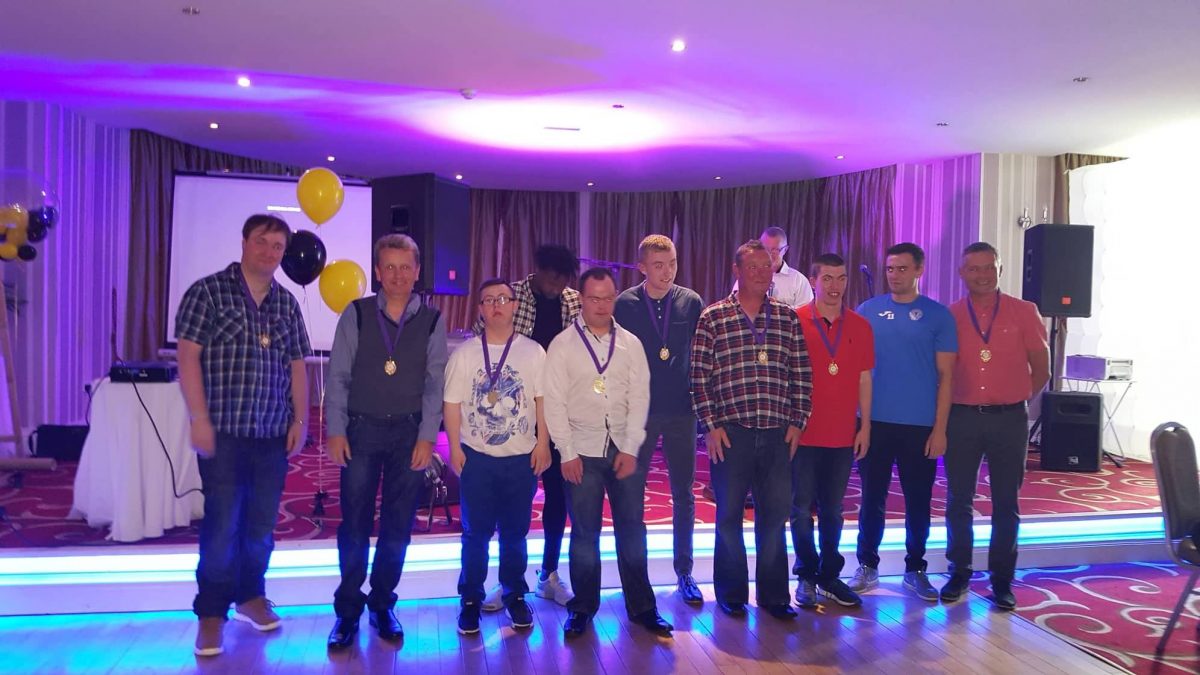 A poster circulated in Letterkenny in June of 1998 to launch what was then the Letterkenny Special Olympics Club.

The group would be based at St Eunan’s College from 12-2pm on Saturdays.

Their first session was held in St Eunan’s on July 4, 1998 and the group now under the North West Special Olympics Club has gone from strength to strength.

Athletes like Shane O’Neill and Nigel Porter have been there from day one and so many of the volunteers, coaches and participants have been in it for the long-haul. It’s just the way of them.

“It was a hard slog for everybody,” says Anne Bone of the early days.

“But the athletes showed such dedication and commitment. The idea was to give our children a sports club and a social club where they would benefit.

“We did every sport that was going.”

Now, they’re down to two – basketball and soccer.

Based now at The Vestry in the grounds of St Conal’s in Letterkenny, they have their own base having also used Dry Arch Park and St Eunan’s in their two decades of existence.

Their 20th anniversary was marked at a big awards function in the Clanree Hotel.

Bond reflected how the staging of the 2003 World Games in Ireland proved a watershed moment for the oganisation.

A year later, they were instructed to join forces with Ulster.

“We were nervous about that, but it was the best thing that ever happened our club,” she said. The Ulster family made us feel so welcome.”

She paid tribute to the likes of Emma McMenamin, an Ulster RDO, and the countless volunteers who have aided the club in the last 20 years.

Nicky McDermott came to London 20 years ago and has been involved with the North West Special Olympics Club for the past 19.

She took her son, who has autism, to the club and reckons she ‘nodded too many times in meetings’. And here she is, as the club’s nerve centre. She runs the club from a spare bedroom that has become an office of sorts.

Basketball coaches like Bill McIntyre and Tommy McCay and football coaches such as Pat McLaughlin and Natalie McFadden give of their time for little reward; bar the sheer enjoyment of it.

And their endeavours were rewarded in the last week as two North West Special Olympics Club members were named on the Ireland team for the 2019 World Games in Abu Dhabi.

Basketball players Leon McDaid and Siobhan McCay – who enjoyed success at the All-Ireland Games in June – will join Team Ireland for the world’s largest humanitarian and sporting event of 2019.

The Mayor of the Letterkenny Municipal District, Councillor Ian McGarvey, had a message for the club: ‘Be involved, be included and be equal,’ he urged them.

“You have proved beyond doubt that you can compete with the best. This is all about character creating and making friends as well, but you can be as good as the next athletes. Dedication is necessary and you deserve great credit for that.”

Councillor Gerry McMonagle echoed the sentiments, adding: “I would like to acknowledge the hard work of the committee, the volunteers, the parents, who dedicate so much time. There is great camaraderie here and it is like a big family, with everyone looking out for and supporting each other. This has helped make them so successful.”

This Sunday, the Voodoo Charity Country Sunday will be run in aid of the North West Special Olympics Club.