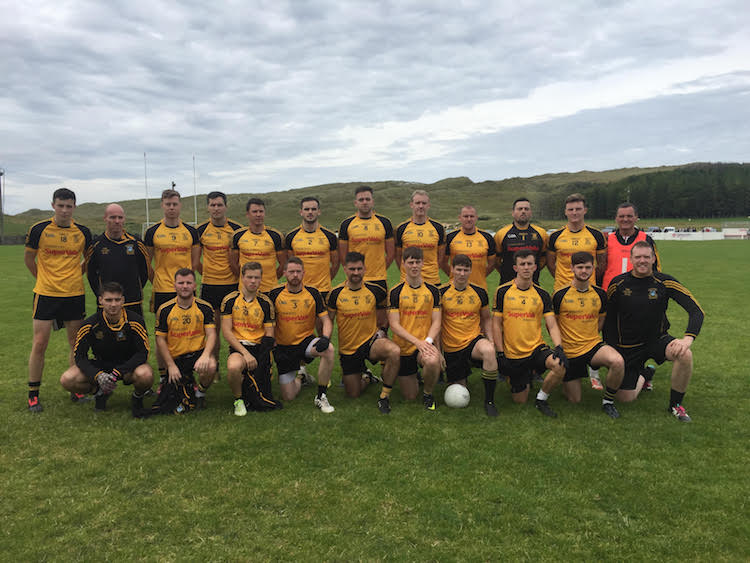 Bundoran secured another brace of league points as they kept up their push for a return to Division One with a hard fought victory over a gritty St Naul’s.

The home side who lined out without a host of regulars deserved their victory but the game was in the balance right up until Tommy Hourihanes palmed effort at the death.Four Hourihane frees and four replies – three from play from the excellent Stephen Griffin had the sides all level after 16 minutes.

The home team had two great goal chances during this period but Paul Murphy and Hourihane both failed to hit the net with Gavin Mulreaney and the post responsible for keeping them out.The lively Michael McEniff edged the Seasiders ahead and this was soon doubled up by Timmy Govorov. Another Griffin free on 28 minutes left the halftime score Realt na Mara 0-6  St Nauls  0-5

Towering full forward Daniel Brennan had the sides level after the restart when he collected a rebound and split the posts. The men in black and amber who were now playing with the wind at their backs again edged in front with scores from Cian McEniff and Johnny Boyle.

A Brennan point left the minimum between the sides on 38 mins but young Cian McEniff who had an impressive hour again pushed the margin out to two. Another Griffin free and a brilliant run and finish from Peadar Mogan had the sides all level at nine points each on 45 mins.

With both sides hitting hard there was stop start nature to the second half but referee Robbie O Donnell tried his best to let the game flow.

A close in Cian McEniff free following a foul on his older brother  was then followed by the score of the game when the diminutive Govorov hit a monster shot after a great solo run.Griffen and St Nauls final score of the game came in the 56 min.

The home side finally found the net on 58 mins when a Johnny Boyle pass was palmed to the net by the veteran Hourihane who has made a real habit of scoring goals in recent weeks.