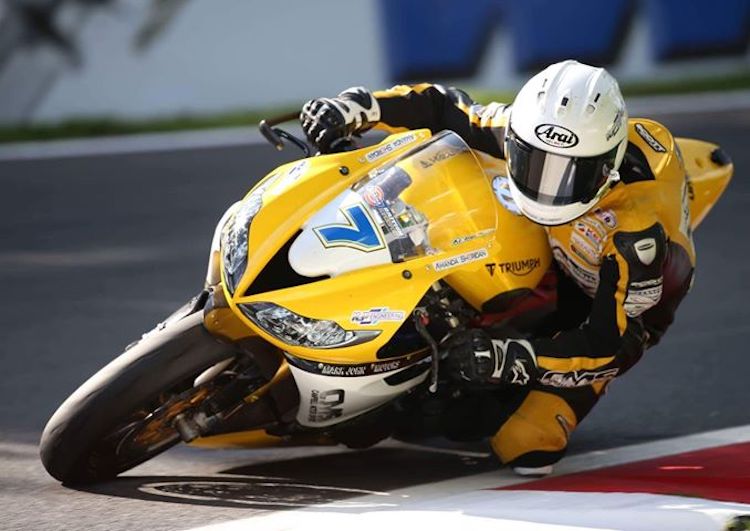 Difficult weekend for Richard Kerr between crutches and the bike

Donegal rider Richard Kerr was in action at Oulton Park in Cheshire at the weekend for the 10th round of the British Superbike Championship (BSB).

Kerr has enjoyed a good run of results recently and had high hopes of maintaining his good form at Oulton.

However the weekend didn’t go to plan as early on the first lap of the first practice a mechanical issue forced oil onto the rear wheel forced Kerr to crash heavily on the approach to the final corner.

That resulted in a trip to the medical centre and he returned later with bruising to the hip and shoulder and on crutches.

After some physio and painkillers on Saturday morning Richard took qualifying steady and managed to finish in 22nd position and earning himself an eighth row start.

Saturday’s Sprint race was tough for Richard with the injuries and he finished in 17th position posting the 16th quickest lad putting him on the 6th row for Sunday’s main race.

After more physio on Sunday, Richard was feeling a little better and was able to walk without the crutches so was hopeful of salvaging some points.

The race was held in tricky conditions and Kerr made a steady start and was running inside the top 15 for the opening Laps and he fought his way up to  magnificent 12th place at the end of the 16 lapper posting the 10th fastest lap of the race.

He was rapidly closing in on a bunch of five riders just a few seconds ahead of him at the finish, it was a great effort from the young Kilmacrennan man after missing a session and riding with the injuries sustained on Friday.

To finish in 12th against the quickest Supersport riders in England was a great effort.

The 11th and penultimate round of the series takes place at the world famous  Assen circuit in Holland and Kerr and the Campbell Motorsport team will be aiming to finish the season on a high and get into that top ten.

Once again Richard would like to thank his dad, Campbell motorsport and all his loyal sponsors for their continued support this season.