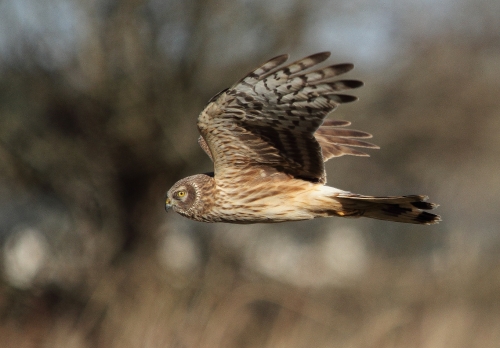 A conservation group concerned about the protection of a rare bird of prey could halt plans for a multi-million-euro wind farm development in Meenbog, Co Donegal.

The Irish Raptor Study Group, a voluntary organisation committed to the monitoring for conservation purposes of birds of prey, particularly the Hen Harrier and Buzzard throughout Ireland, has been granted leave to legally challenge An Bord Pleanála’s approval of the development.

Mr Justice David Barniville said in the High Court yesterday he would consider setting a date for a judicial review and directed that all parties have relevant documentation lodged in court by October 19th.

Although the main thrust of the proceedings is against An Bord Pleanála the developer and Donegal County Council have been joined as notice parties.

Ryan Wilson-Parr, of Gleann Alainn, Drogheda, Co Louth, who is chairman of the bird protection group, claims the planning permission is contrary to the European Birds Directive and to the Planning and Development Act.

He told the court that in December 2017 the Cork-based company Planree Limited had applied for planning permission for 19 turbines at Meenbog, Croaghonagh and Cashelavean in south Donegal, an area identified by the National Parks and Wildlife Service as important for the Hen Harrier and deserving of special protection.

The Study Group had strongly objected to the proposed development and claimed the southern area of the county supported up to 11 territorial pairs of breeding Hen Harrier, equivalent to seven per cent of the national population.

An Bord Pleanála’s approval of the development had been granted with 20 conditions attached, including the appointment of an on-site Ecological Clerk of Works and the putting in place of a specific monitoring programme for the species throughout construction.

The Irish Raptor Study Group say the Hen Harrier, once widespread throughout the country, is now Ireland’s rarest declining breeding bird species due to habitat loss and has suffered a 50 per cent decline in numbers over the last 40 years.