The fast-paced film that races through Letterkenny has been watched over 66,000 times in just four days.

Bride Carol-Anne knew exactly where John would be, so she took matters into her own hands and tracked him down to his garage.

The couple, who are both car and motorbike enthusiasts, recorded this action-packed film to entertain their guests:

Speaking to Donegal Woman, Carol-Anne said this video was just one of many memorable moments from their wedding day. From a flashmob to show-stopping gifts, there was no shortage of highlights.

“Anybody that knows John and myself know we are always up for the craic. We thought if people are going to make an effort to come to our day, we were going to give them a surprise,” she said.

Carol-Anne, from Coolboy, and John, from Gartan, had researched wedding videos from around the world before coming up with their own plotline. They brought their love of cars and local places together for the mini-escapade. They filmed the video in just four hours a week before the wedding.

Many of the funniest moments in the film were unplanned, said Carol-Anne, and it only added to the fun that was had during filming. 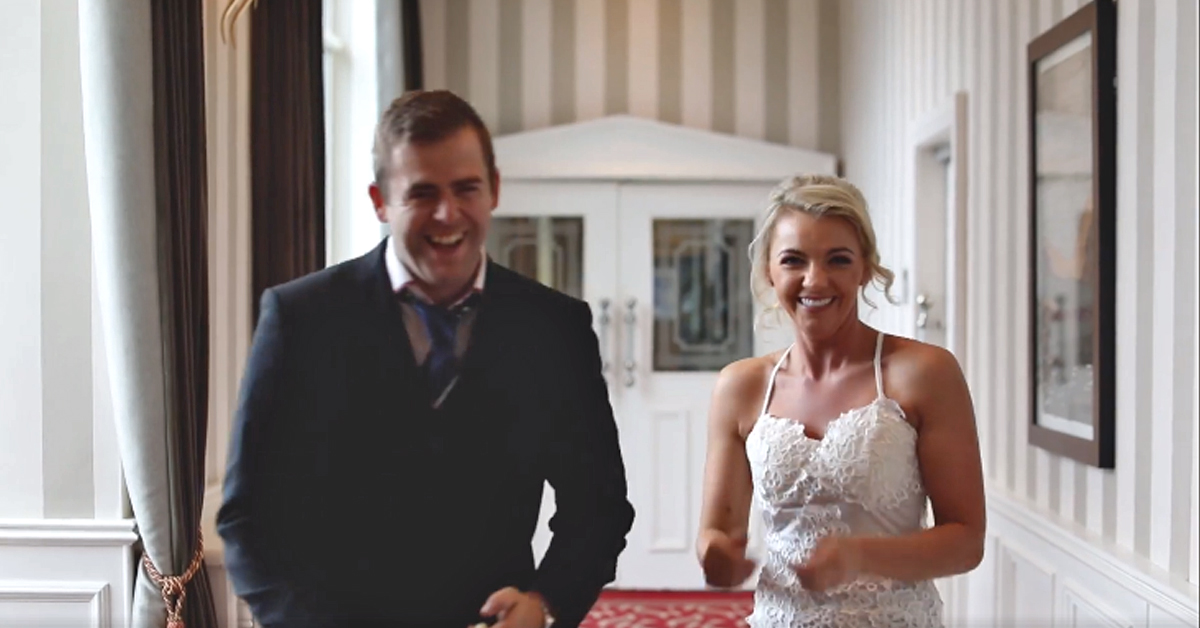 The finished product went down a treat with guests in the Clanree Hotel. “When we walked in at the end everyone was clapping, shouting and whistling. A lot of people were shocked there was so much in it. Some people thought it was real too, but a few of the girls clicked that I had a different dress on,” said Carol-Anne.

One car which was featured in the video was part of another special moment in the couple’s wedding day.

At the top table, both John and Carol-Anne surprised each other with incredible gifts. John has been working on two cars for years now, but on the big day, he stunned his wife by handing her the keys to the white car.

“Little did John know that I had bought him a new work van! The two of us were working hard to save money behind each other’s backs to buy the van and revamp the car in secret,” said Carol-Anne.

John, who has his own property maintenance company, and Carol-Anne, who is a beauty therapist, were none the wiser about each other’s gifts until they presented them to one another at their reception.

The couple had planned numerous amazing moments for their guests in September. It started in the Cathedral with a musical flash mob featuring the bride herself.

“Myself, my sisters and my neighbour sang parts of The Rose to welcome John into the family. My sisters were hidden in different parts of the chapel and I sang the last verse,” Carol-Anne said.

Carol-Anne’s sisters returned the favour at the wedding reception by singing a Dixie Chicks love song for the happy couple. “That was their surprise for us,” Carol-Anne said.

With all these stand-out events, the Doherty’s full wedding video will be an entertaining one to treasure!

“We’re looking forward to looking back and seeing it all,” said Carol-Anne.

Carol-Anne and John said a big thank you to staff at the Clanree Hotel, Duds ‘n Suds, the Snug bar and to Paul Doherty Photography and their cast members for their help in making their entrance video.