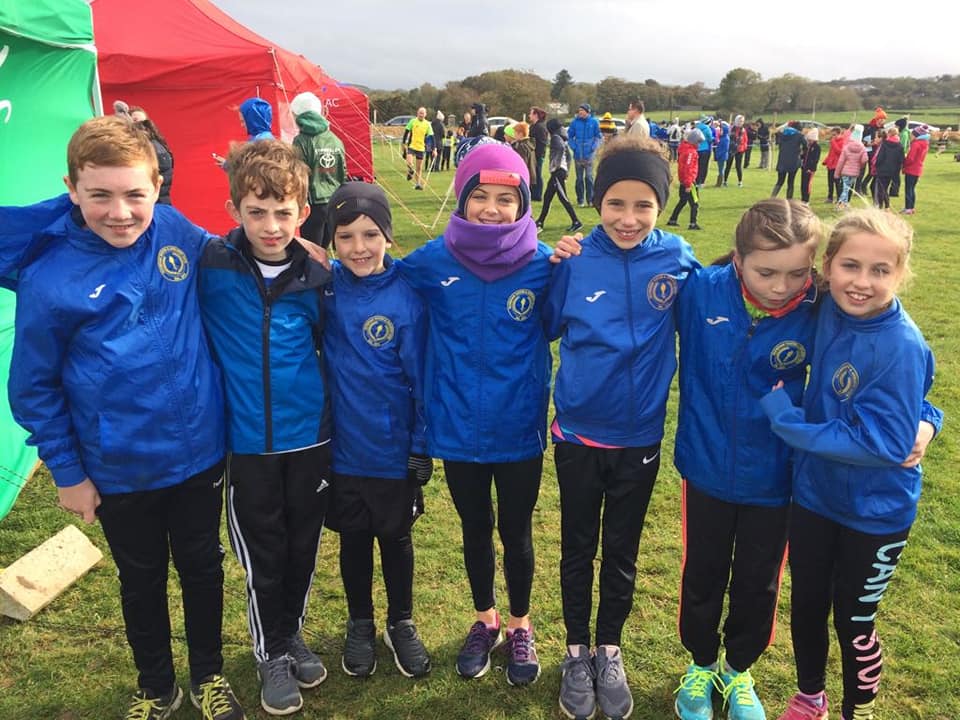 Olympian YAC were out in force at the recent even age group Donegal Cross Country Championships, hosted magnificently well by Inishowen AC in Carndonagh.

With medals for the top 10 individuals and top three teams up for grabs, our Olympian’s were not short of first-class performances all around.

Cara Mc Cabe in her first ever cross country event, ran in the U8 girls’ race and showed great heart and a cool head to pace the race well and move her way through the field and hung onto the leader. Once she saw the finish line it was a fierce fight to the finish and Cara showed great determination and competitive spirit to just pip the Gold medal, in the end, to be crowned Donegal Champion.

Oisin Cuskelly also in his first ever cross country event, ran in the U8 boy’s race and demonstrated great potential as he claimed a well-deserved medal for finishing 5th overall. Boyd Russell, after his All Ireland track and field 600m Bronze medal, showed he was in exceptional form in the u14 Boys race, despite being a year above his own age. He showed unbelievable maturity, controlling the race from the front throughout, narrowing the leading group from 8 to 3 athletes. With 400m to go, he showed the rest of the opposition a clean set of heels as he raced away from the rest of the field to claim a comfortable Gold medal and mantle of Donegal Cross Country Champion.

Sean Mc Ginley, the Irish u15 Cross Country Champion from last year, showed true class in the u16 Boy’s race. In a very tactical race, against some of the countries best cross country runners, it came down to dash to the line in the end between 4 athletes and it was Sean who showed his class and came away with yet another Gold medal and the title of Donegal Cross Country Champion.

Our U12 Girl’s team of Erin Friel, Anna Russell, Orlagh Faul and Chloe Deeney worked fantastically well off each other, pushing themselves to their limits and walked away with the team Bronze medal for their amazing efforts. This augers well for this plucky team of stars for the upcoming Uneven Donegal Cross Country Championships where they are all eligible to compete at U11 level. Nuala Bose, also competing in an age group above herself, showed that she is ever improving and raced exceptionally well to claim a well deserved top 10 medal in the U16 Girl’s race, finishing a very creditable 9th overall.

A special mention to Anne Marie Bose who ran in the Galway Half Marathon just the day before running close to new PB of 1hr50mins, and then ran her first Masters cross country event. She and four other members Anne Marie Mc Geehin, Vanessa Friel, Anne Marie Deeney, Karen O’ Donnell made club history by being the first ever female masters team to compete at a cross country championships. They all showed fantastic club spirit and determination and claimed a well deserved 5th team overall finish.

Our full team are as follows:

Thanks to Inishowen A.C and Athletics Donegal for organising the event and well done to all clubs who participated. Especially thanks to all of our club coaches and parents who travelled to support the club and of course to our wonderful Olympian’s who competed with such heart over the weekend. Next up will be the uneven age groups Donegal Cross Country Championships on Sunday the 14th October at the Rosses. Olympian YAC will have another strong contingent contesting this as the preparations continue for the upcoming Ulster and N. Ireland Cross Country Championships.

We are insured to cater for any and all abilities from 8 years of age right up to senior and master’s level who wishes to train, keep fit, have fun, and/or compete at a local to national/ international standard.

New members as always are more than welcome. For further details, please do not hesitate to contact Martin O’ Donnell on 863838240 or message us via Facebook (Olympian AC) or feel free to come down and have a chat on any of our club nights.