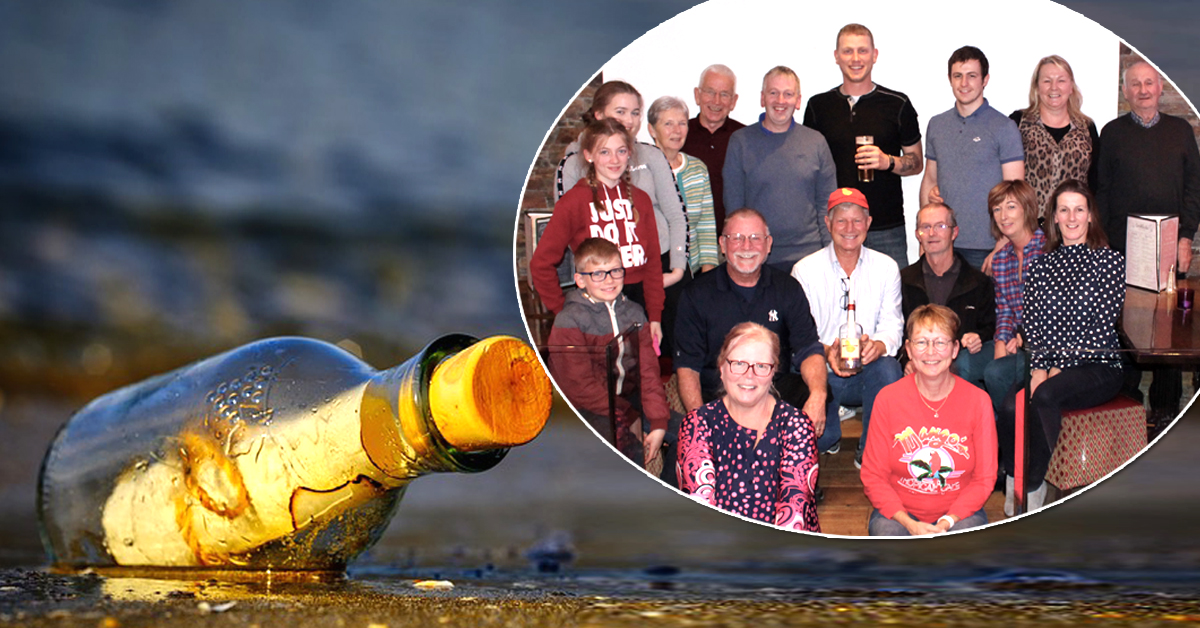 A group of US visitors have had an unforgettable experience in Donegal after forming a chance connection with two families in the area.

The incredible story stretches back to 1977 when American sailor Tom Leonard tossed two messages in bottles into the Atlantic between the Azores Islands and New York.

The rum bottles washed up on two west Donegal beaches in 1983 – six years later – and were discovered in the sand by two local men at separate times.

Tom’s message said his crew’s yacht, the Salty Dog, had sunk and he asked the finder to notify his mother Mary Leonard in Indianapolis, Indiana. 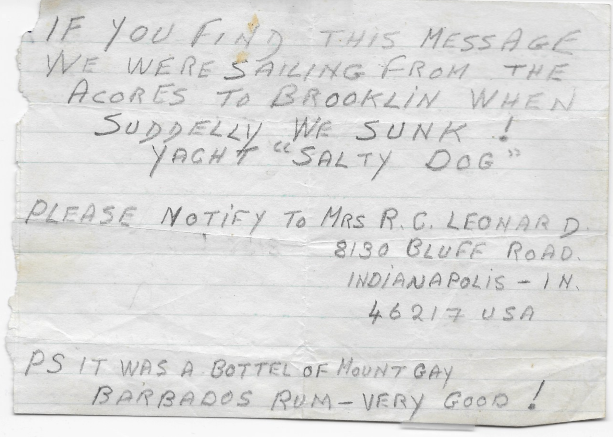 It turned out that Tom’s boat was not sinking at all. The mischievous crew member wanted to add a sense of urgency to his note in the hope of getting a reply.

The two men were Joseph O’Donnell and Thomas Boyle from Annagry in the West Donegal Gaeltacht. They wrote to Mrs Leonard and, in doing so, set in motion a series of events that would last three decades. 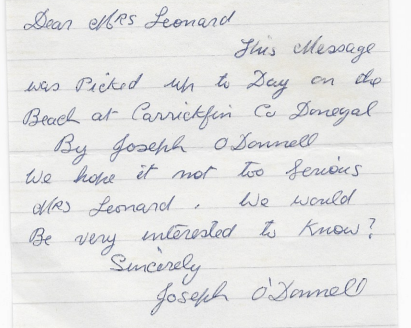 Tom, his wife Diana and son James, and Tom’s brother Bobby his wife Mona planned a trip to Donegal last September as part of a European holiday.

They longed to meet their Irish correspondents and reached out to Donegal Daily for help. Our story reached the right families within 24 hours.

It emerged that Joseph (Josie) and Thomas had sadly passed away over the decades, but their families were eager to meet the Leonards.

The US visitors were greeted with a warm welcome at a meet-up in the Caisleáin Óir Hotel on October 1st.

The families hit it off and spent the evening sharing stories, songs and toasts to the men. 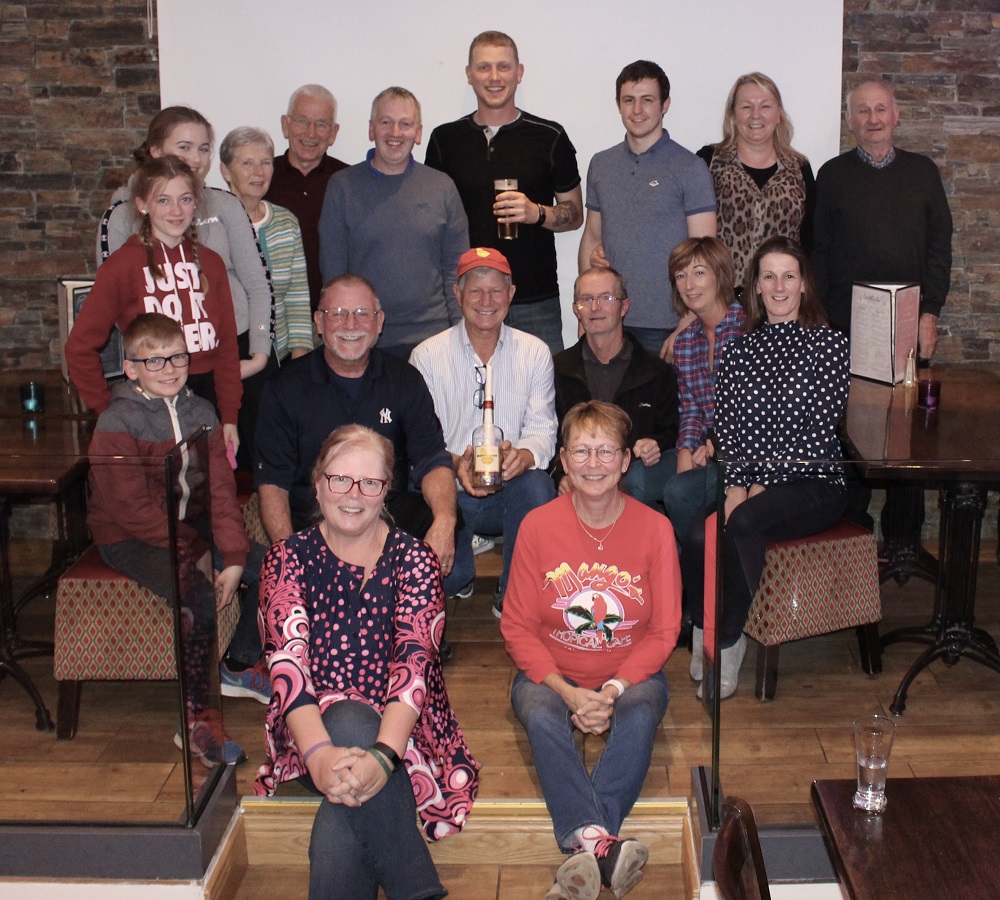 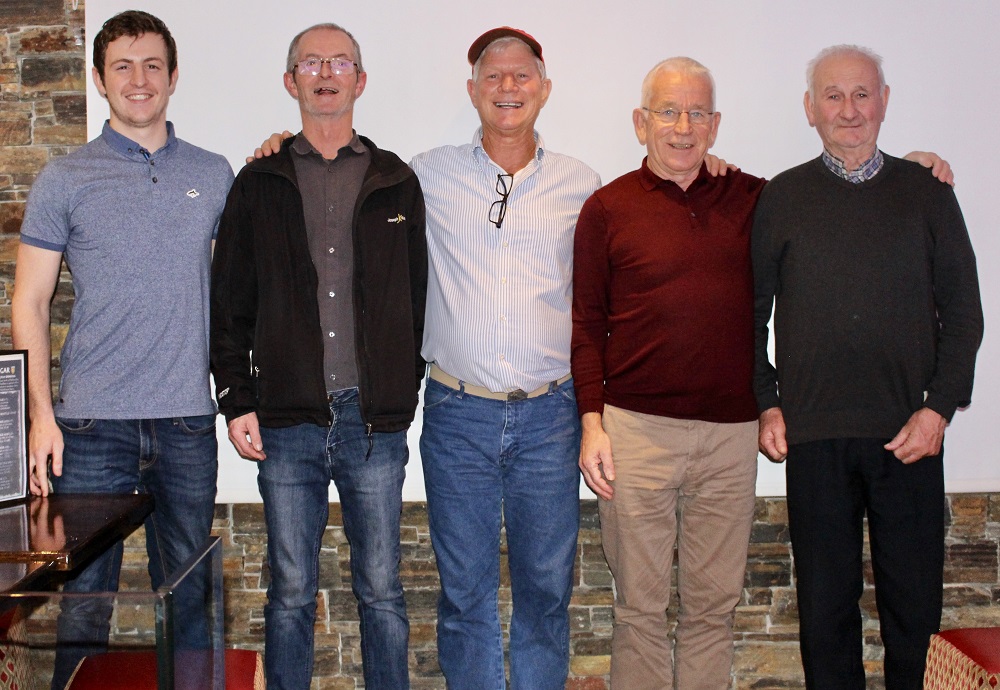 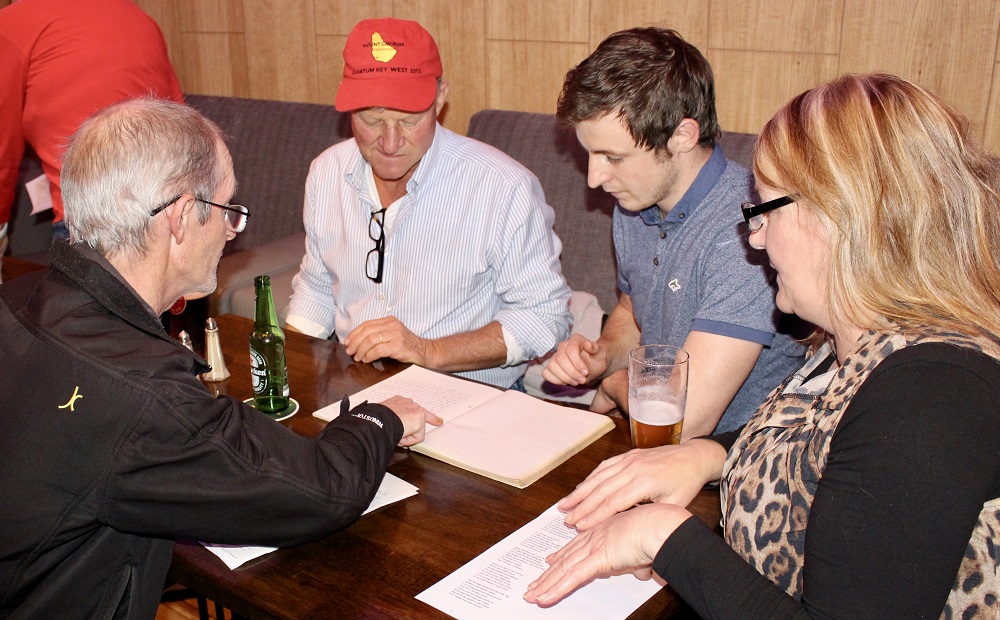 The US and Irish families share stories and songs on their meeting in Donegal. Annagry, Donegal, 1st October 2018

Tom’s sister in law Mona Leonard described the gathering as “the most amazing meeting.”

Sadly, the US visitors had to cut their trip short when they received news the next day that Tom and Bobby’s mother had passed away.

Mary died of illness at the age of 94. Her daughter in law Mona believes that Mary held on to see her sons complete their incredible journey to Ireland.

Mona says: “My personal opinion (and it’s probably just my sentimental side coming out) is that she (Mary) held on long enough for this message in the bottle story to come full circle. She wouldn’t have wanted Tom to be that close and have to miss meeting the wonderful families of Thomas Boyle and Josie O’Donnell.

“She was kind, caring and in generous and wanted all of those around her to live their lives, even in her last few days she didn’t want to trouble any of the family.

“She told them to go and live their lives and that she was ok and she was ready to rest.

“So, in the sadness of her loss, there were memories made that will last a lifetime,” Mona says.

If Mary hadn’t kept the letters, Mona points out this whole event wouldn’t have happened. 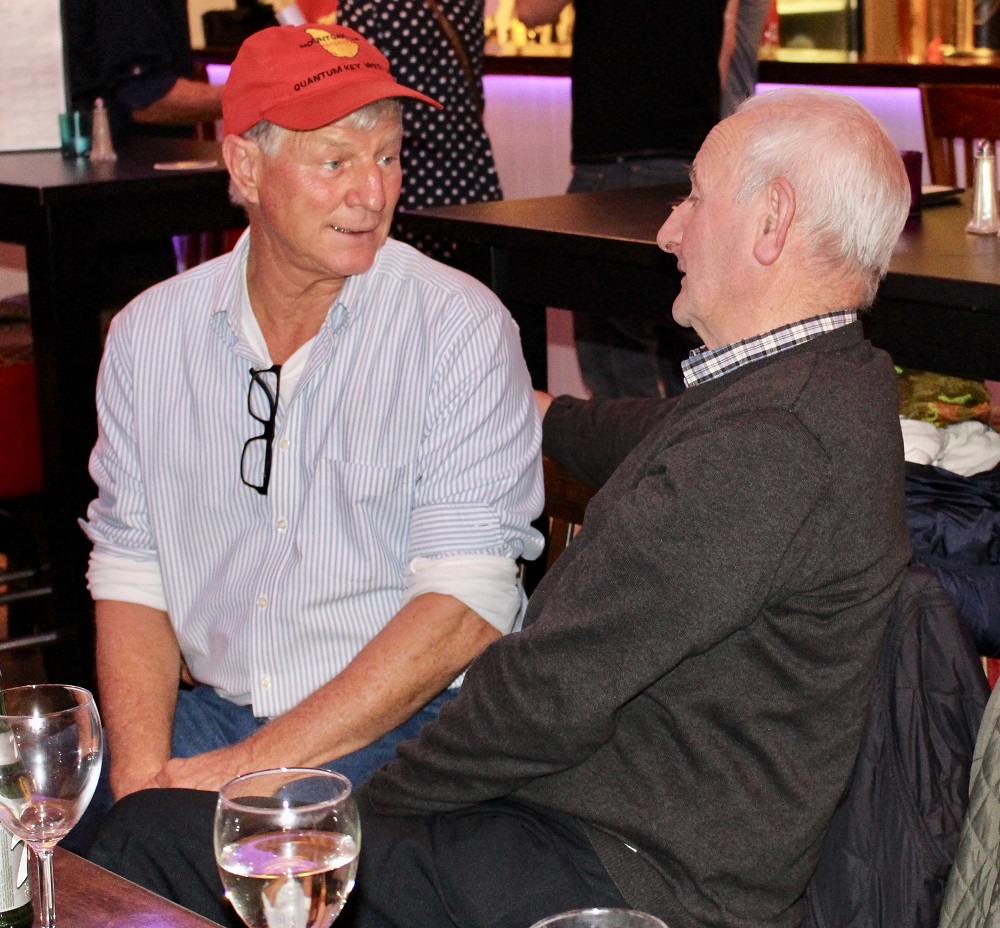 “We first gathered at Caisleáin Óir Hotel with Ownie Boyle and Arthur O’Donnell, cousins, grandchildren, as well as nieces and nephews of both families.

“We spent a few hours sharing the letters and stories and getting to know each other. Neil McGinley, Thomas Boyle’s cousin, sang a song he had written just the night before, telling the tale of the Salty Dog and the messages in the bottles. After that meeting, a few of us gathered at Sharkey’s.

“The next morning, Ownie Boyle, Neil McGinley, Arthur O’Donnell (Josie’s son), Síle Ní Duibheannaigh, Kevin Devenney, Tom, Diana, James (Tom’s son), Bobby and myself all met at Mullaghderg Strand and then at Carrickfinn Strand, where both bottles were found. 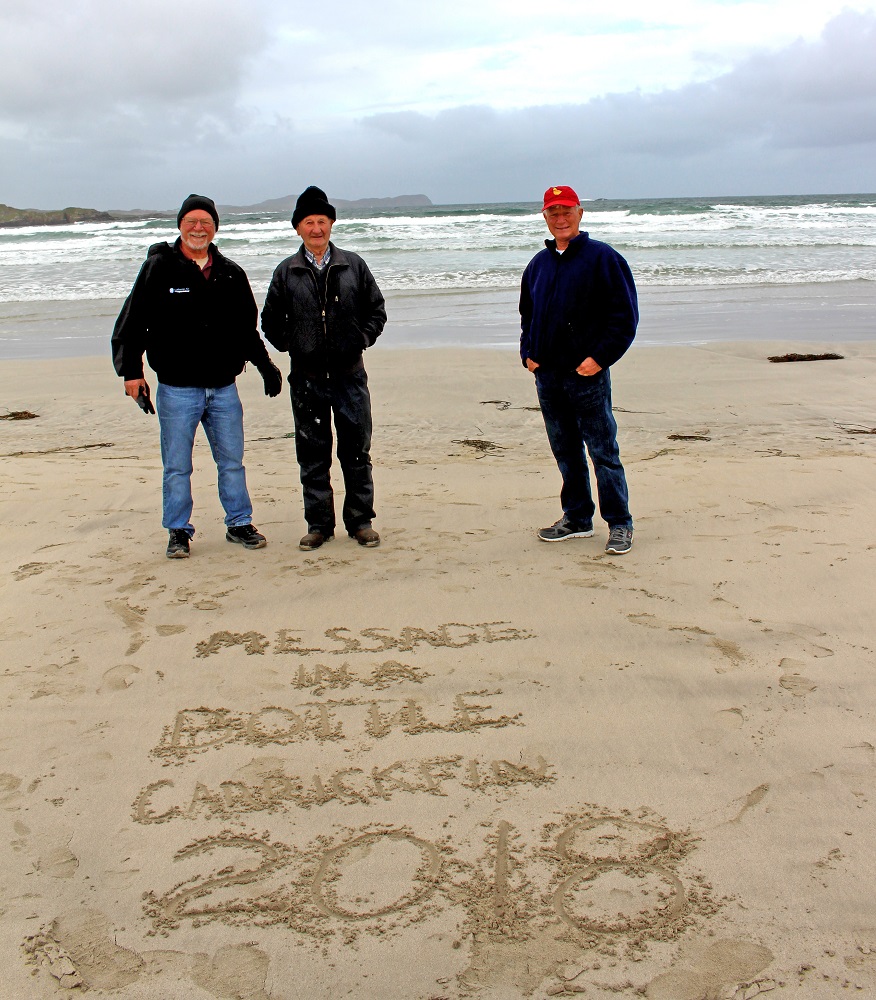 “We could see the beauty of the area despite the overcast skies and a bit of mist in the air. The warmth in the hearts of those gathered embraced us all and kept us warm.

Mona continues: “Through the mist we, the weary travellers, could see the beauty of the beaches, rocks and crashing waves.

“The hike up the hills at Carrickfinn was nothing short of amazing. The view from atop the hill was breathtaking!”

The tourists also visited Thomas Boyle and Joseph O’Donnell’s nearby graves in Annagry.

In a wonderful coincidence, the bar where the families first met stocked Mount Gay rum – the same brand of the bottles that Tom threw into the sea on his voyage. Tom and the families raised a toast to Thomas and Josie. 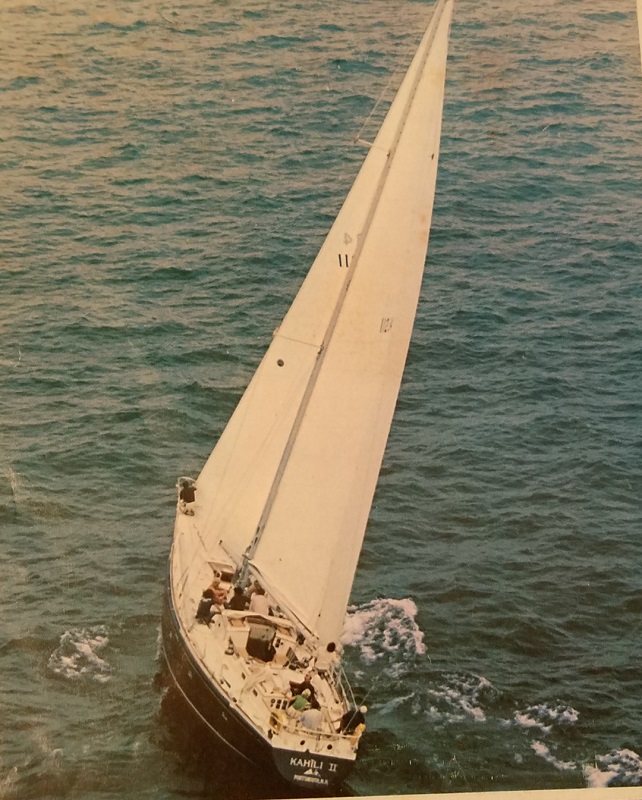 The Salty Dog Crew on board the Kahili II, formally called the Piranda

Looking back on the special meeting, the Leonards are grateful to all who helped them make their dream a reality.

“We would have visited the area and enjoyed the beauty, but wouldn’t have ever had an opportunity to take this journey as far as we did,” Mona says.