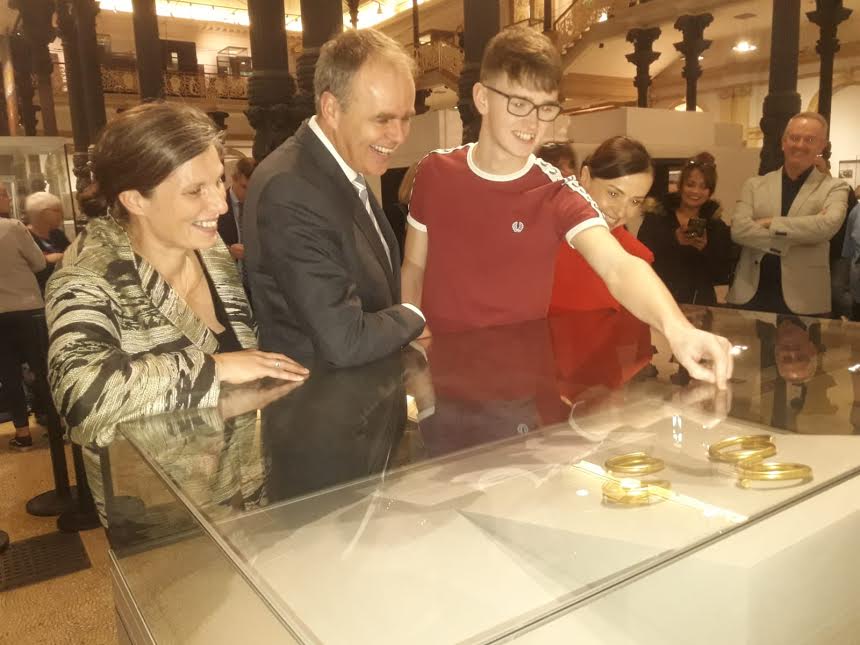 A group of people who found four priceless gold rings in a Co Donegal field have shared a €250,000 finder’s fee.

The rings, which were discovered in Convoy in June, date back thousands of years to the Bronze Age.

The golden hoard, which weighs 4kgs (8.8Ibs), went on display at the National Museum today.

Among those at the unveiling was Donegal farmer Norman Witherow, who unearthed the rings.

Mr Witherow initially didn’t know what to do with the rings.

“I couldn’t figure out what they were. They were covered in clay and we had no idea if they were gold or even copper.

“We had no idea of the value and we definitely didn’t appreciate their worth when we first discovered them.”

Museum chiefs in Dublin were alerted and they immediately realised the significance of the find.

This led to a team of experts being dispatched to the site within hours.

The four bracelets have become known as the Tullydonnell Hoard after the townland in which they were found.

A spokesman for the Department of Culture, Heritage and the Gaeltacht confirmed a fee had been paid for the discovery and handing over of the Donegal bracelets.

“It is normal practice to pay rewards to finders of archaeological objects discovered in legitimate circumstances and reported to the National Museum of Ireland.”

The practice of payment of a finder’s fee is designed to encourage people not to sell any possible artefacts on the black market or to melt precious metals down.