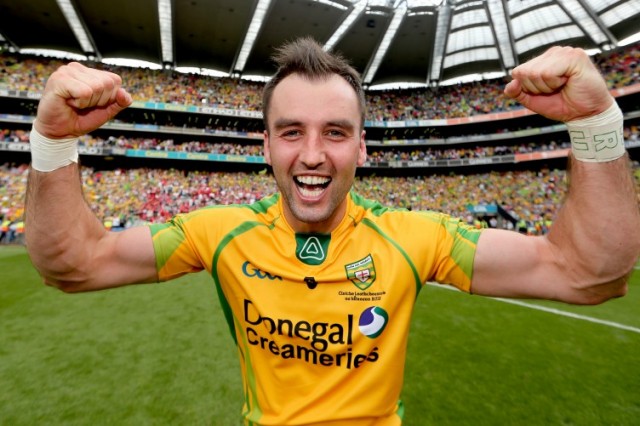 Former Donegal star Karl Lacey had been a key part of Aidan O’Rourke’s bid to become the new Roscommon manager.

Indeed, the unavailability of Lacey to commit to the role as head coach resulted in O’Rourke withdrawing his candidacy.

O’Rourke’s name had been due to be put before Roscommon’s clubs for ratification on Monday night.

The appointment was deleted as O’Rourke sought an additional 24 hours to finalise his backroom team.

The delay was due to doubts over Lacey’s availability and yesterday afternoon O’Rourke informed the Roscommon board that he was pulling his name out.

Lacey, a four-time All-Star winner as a player, during a career that saw him win the All-Ireland with Donegal in 2012, was a selector with Declan Bonner and the Donegal senior team this year.

In a statement the Roscommon County Board said:

The process to select a manager commenced on September 10th when the committee was ratified by Roscommon Co Board and given the mandate to recruit a new Senior Team Manager. The committee consisted of Chairman Seamus Sweeney. Secretary Brian Carroll and Treasurer of the county board David O’Connor and they were joined by Niall Carty former Roscommon Senior team captain and Ciarán Heneghan a former Roscommon senior footballer.

Interviews were conducted during week 6 and last night Monday, Oct 22 Roscommon GAA Management Committee expected to be in a position to put the name of the preferred candidate for consideration to the club delegates.

Our preferred candidate was Aidan O’Rourke. His team was to consist of  Mike McGurn Strength and Conditioning, two Roscommon coach/selectors, and a head coach Karl Lacy.

The reason for the delay was because of unexpected doubts in relation to Karl Lacy’s availability as head coach. Unfortunately, this morning the county chairman received a call from Aidan O’Rourke informing him that he was withdrawing from the process.

The Roscommon GAA Management committee are very disappointed at the turn of events but are fully committed to completing the selection process. However, the committee is concerned at  attempts that have been made to influence the outcome of the process over recent days. The committee believes that these events have undermined the integrity of the process and potentially affected our ability to attract a new manager.

In addition, some of the public commentary on social media has been extremely unhelpful.