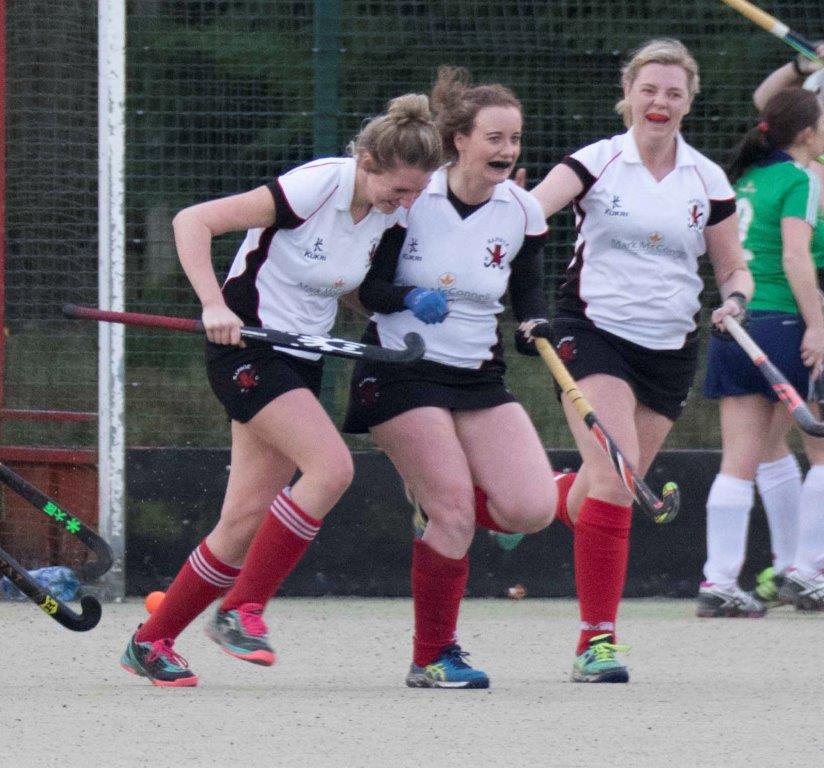 written by Stephen Maguire November 18, 2018
FacebookTweetLinkedInPrint
Raphoe Ladies 1st XI continued their unbeaten run within their Ulster Senior League 1 table with a hard-fought 2-1 victory over their Belfast counterparts CI Ladies at the Royal and Prior Comprehensive School on Saturday.
Raphoe 2 CI Ladies 1

Having previously comfortably beaten CI in the group games of the Ulster Senior Cup earlier in the season, the league game did not prove as easy for Raphoe, but with grit and determination, they came out victorious.

A double by Leanne Patterson leaves the ladies joint top of the table with KV Ladies and Omagh, however, the Raphoe side have a game in hand over both teams.

From the first whistle, Raphoe tried to gain control and domination over CI, capitalising over missed passes and creating opportunities at the opposite end.

Whilst Raphoe came out strong, CI were quick to counteract and caught the Raphoe side on the offence. However, Raphoe remained strong in their defence and were able to bypass the storm. Raphoe were awarded numerous short corners but to no avail.
The deadlock was broken after 15 minutes when Leanne Patterson weaved her way inside the oppositions “D” bypassing numerous stick tackles to reverse the ball into the back of the net following a timely pass from Arylne Kilpatrick.
With a goal in hand, Raphoe continued to push for a 2nd and this game after 23 minutes with some excellent passing out of defence.
This came from a pass from Victoria Wray to Sabrina Barnett who found Arlyne Kilpatrick on the right – from here Kilpatrick again found Barnett who slipped the ball to Rebecca Wauchope who then found Amy Wauchope in the oppositions 23. A well-timed pass from Amy found Leanne Patterson who calmly slotted the ball in the back of the net having made an excellent run from the halfway line.

CI did not give up and with excellent play down their left, they found themselves back in the game. A sideline ball made its way into the Raphoe D mid-air, were the CI attacker got a touch to the ball, wrongfooting both the Raphoe defender and netminder.

Into the second half, Raphoe continued to press with little challenge on the Raphoe goal. With a high press in action, the CI team found it difficult to get the ball out of their own half.

There was some excellent interlocking passes and breakdown, however, Raphoe found it difficult to add to their lead.
With Raphoe pressing high, CI did counteract on a few occasions, however, the Raphoe defence held strong with well-timed tackles one in particular from Janice Nelson who came across as last person to prevent the oncoming forward from striking at goal.

Stick tackles were flying from both sides in the second half with a five-minute green card shown to both Raphoe and CI players. There was an abundant of short corners awarded to Raphoe throughout the half, however, Raphoe were not clinical enough in converting these.

Player of the Match for Raphoe was goal-scorer Leanne Patterson. The Raphoe Ladies have two massive weekends ahead of them.