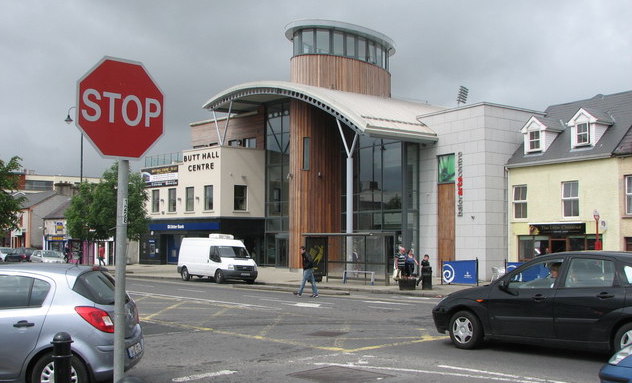 The Ballybofey & Stranorlar Chamber of Commerce has expressed its shock and concern at the financial impact that a proposed Sligo to Letterkenny TEN-T route corridor will have on the Twin Towns.

They say this will also have a knock on impact for many local businesses.

Spokesperson for the Chamber, Mr Charlie Ferry, said the Chamber is appalled that no consideration has been given to connecting Ballybofey & Stranorlar to the proposed TEN-T route.

And he said the lack of a proper connecting route into the towns has the potential to destroy the Twin Towns.

He said “We have consulted widely with our members – all of them are expecting a significant drop in turnover with those in the Hospitality sector expecting a drop of up to 25% if the TEN-T route corridor proceeds as planned. 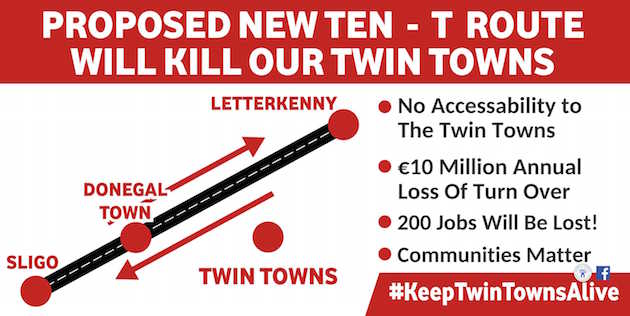 “Ballybofey and Stranorlar are effectively service towns – shops, hotels and other catering outlets. These are all highly dependent on passing trade and cross border trade.

“The hospitality sector provides 30% of the jobs in the Twin Towns whereas the figure nationally is 10%. Many of the 34 businesses operating in this sector in the Twin Towns are of the view that they will be forced to shut down if the route corridor proceeds as planned.

“Many permanent jobs will be lost and part time and seasonal employment will be seriously impacted. Reduced spending by businesses will have an impact across the whole community – service providers such as tradesmen, cleaners, professional services and others will be directly impacted.

“We believe that the impact of a Hard Brexit will be nothing compared to the impact that the proposed TEN-T route corridor will have. If it goes ahead as planned it will turn Ballybofey and Stranorlar into Ghost Towns similar to what you would see in Mid-West America”.

Mr Ferry added that it is normal that consideration would be given to towns that are being bypassed so that the impact of the bypass would be minimised.

“Bypassed towns are generally visible from the bypass and connecting routes are provided from the heart of the bypass to the towns so that the towns are easily accessible.

“The most shocking sign of the total lack of consideration for the Twin Towns is there isn’t one new access road being built which would link the TEN-T route corridor with the heart of the towns.

“It is the minimum that anyone would expect. Instead, we are being told that access to the towns will be via the existing routes which are not fit for purpose and will not be or cant be upgraded”.

According to Mr Ferry members of the Chamber fully recognise that a route corridor or bypass has the potential to be a good thing for the towns.

He said it could take heavy lorries and non-stopping traffic away from the towns and free up the roads for people who work, shop and do business there.

However, the proposed TEN-T route corridor will only divert a fraction of the heavy traffic away from the Twin Towns, added the spokesman.

He said worse than that is the fact that there is no access road into Twin Towns from the proposed TEN-T route corridor so passing traffic will soon forget about the Twin Towns”.

“They will just continue on their journey. If they do decide to take either route into the towns they will still be faced with all the usual traffic congestion as the current proposals are not dealing in any way with the traffic congestion issues that currently exist”.

The Chamber is calling on all relevant parties to go back to the drawing board to come up with a traffic management solution that will give proper consideration to the towns of Ballybofey and Stranorlar.

The Chamber is also calling on all businesses and the community in general to seriously consider the impact that these proposals will have on the commercial life of the Twin Towns and the wider community.

Mr Ferry noted that the proposed TEN-T route corridor has to be approved by Donegal County Council.

He concluded “We in the Chamber are encouraging all businesses and individuals to contact their local Councillors to express their concern at the impact of the proposed TEN-T route corridor and to request a traffic management solution that won’t destroy the Twin Towns”.