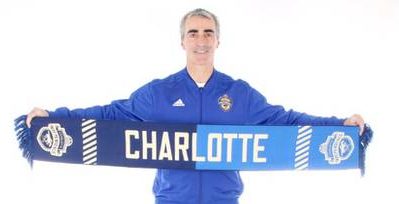 Following Jim McGuinness’ transition from Gaelic football to soccer in 2012, the Glenties man has been highly touted for several top managerial jobs.

After guiding Donegal to an All-Ireland title in 2012, a part-time five-year spell with Celtic ended in 2017, with McGuinness expressing his desire to become a full-time soccer coach.

McGuinness ruled himself out of the running for the vacant Mayo senior football managerial hot seat in August, insisting that he is not looking for a return to GAA management.

His desire to manage in soccer was evident, so much so that the 46-year-old made the move to the Chinese Super League as an assistant coach of Beijing Sinobo Guoan F.C under Roger Schmidt.

On Friday morning, McGuinness was confirmed as the new head coach of Charlotte Independence, a second-tier outfit in Charlotte, North Carolina, on a three-year contract.

Four years ago, Independence acquired the USL Pro franchise rights for Charlotte from the Charlotte Eagles, one of the longest-serving U.S. soccer members, who moved into the amateur Premier Development League (PDL).

The East-Coast outfit currently play their soccer games at the Sportsplex at Matthews in Matthews, North Carolina, which has a capacity of 5,000.

Named after the Mecklenburg Declaration of Independence, a text published in 1819 with the claim that it was the first declaration of independence made against Great Britain, the North Carolina outfit have looked to McGuinness to guide them to success.

The American side were also knocked out in the second round of the U.S. Open Cup in May.

There is no doubt that this has been the opportunity that McGuinness has been looking for, but it is certainly not going to be easy in a state where other sports take the certain stage.

The USL announced in August that it will expand to a 33-week regular season in 2019, with the schedule to remain at 34 games for the second straight year.