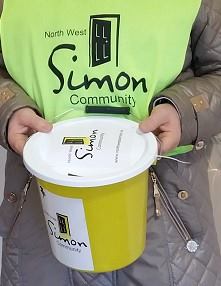 The Simon Communities of Ireland faced a 60% increase in people turning to all of their emergency, housing and support services in the past two years.

Figures for the first six months of this year suggest record numbers of people using services in 2018.

The Simon Communities of Ireland report compiles data from the entire national network, including the North West.

At least 81,000 men, women and children will face Christmas this year without a secure place to call home, according to Niamh Randall, National Spokesperson for the Simon Communities in Ireland.

The organisation has called for further action from the Government in 2019 and for housing to be recognised as a fundamental human right in the Irish Constitution.

Ms Randall said: “It is time for the Government to recognise that the private sector alone will not deliver the housing that people need; it cannot solve this crisis. The Government must move away from private sector reliance and the acceptance that housing is a commodity rather than a home.

“We need the State, in conjunction with Local Authorities and Approved Housing Bodies, to build social and affordable housing across all tenure types quickly within sustainable communities nationwide; to prevent more people from becoming homeless; and to address the complex or multiple needs that can be a cause or consequence of homelessness.”